More Than a “Filter Bubble”

In a two-part post in December of 2020, I discussed polarization and information literacy. Not a month after writing these posts, I watched the events of January 6, 2021, unfold on the big screen in my library. Typically we would have never considered watching Congress’s joint session to count the electoral votes. But this time, the election had caused such controversy that we watched the event as it began and the subsequent breach of the U.S. Capitol on live television.

The more I try to immerse myself in diverse news and social networking mediums, the more I am convinced that there are not just filter bubbles, but there are separate information worlds in which people live. 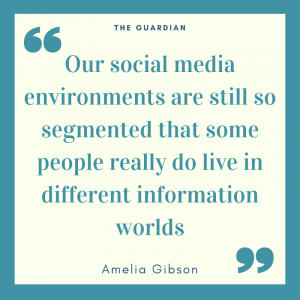 The worlds or platforms repeat phrases, descriptors, and terms. Multiple reporters, editorialists, or influencers repeat the talking points. A word or acronym is twisted or changed and then used as pejorative. One example is the term woke. The Guardian, Vox, and a religious publication Message have all discussed how the term suffers from misinterpretation.

When our students immerse in an information world, they may be concerned about a specific crisis that they have heard about repeatedly. But, unfortunately, a student may be viewing a source their teachers and guardians are not entering.

In an article from the Guardian, Kate Bishop discusses millennials and Gen Z and their use of Instagram as a news source. In this article professor, Amelia Gibson suggests that “the solution lies in a convergence of interests – as social media brings attention to previously overlooked stories and rebalances the power to share news, traditional media still has a part to play.” Finally, a Medium article encourages journalists to use TikTok to communicate content to younger audiences.

Students are not the only ones disconnected from educators. For example, parents have deeply invested in some of the major television platforms that now encourage distrust of the education profession. Media controversies are surrounding the Common Core, Critical Race Theory, and most recently banning books. These rifts are unfortunate because teachers need a positive partnership with parents and vice versa. Stephen Sawchuk at Education Week asks and answers, “Which News Sources Are Credible? Even Teachers Don’t Agree.”

AdWeek tracks television viewership of the major news outlets on a daily scoreboard. The three most-watched cable news networks are Fox News, CNN, and MSNBC. However, according to Public Religion Research Institute, it became necessary to divide Republicans by media trust in their data collection because “Republicans’ most trusted sources have shifted substantially over the past year.” This change points to a post-election and pandemic ideological shift. And maybe yet another information world.

Role of the Librarian in the Information Worlds

The idea of watching or reading every conceivable news outlet or platform is not possible. However, some apps can help summarize reports from various news outlets. A resource that I have found incredibly helpful is the All Sides site with its headline roundup and Instagram account. In addition, the All Sides site has a downloadable guide titled “How to Spot 11 Types of Media Bias.” Another enlightening article titled “Beyond Left vs. Right” from All Sides explains how we need to look beyond political divisions to 14 different types of ideological bias—so, not left, right, center but many different variations.