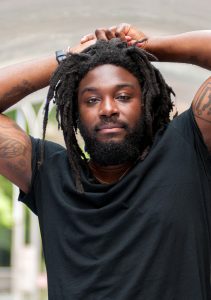 Jason Reynolds, author of “Ghost,” “Patina,” “Long Way Down,” and “Miles Morales: Spider-Man,” will serve as the national spokesperson for the 2018 celebration of School Library Month (SLM). Observed in April and sponsored by AASL, School Library Month celebrates school libraries as approachable, equitable, and personalized learning environments necessary for every student’s well-rounded education.

“It’s impossible for me to talk about the importance of the school library without talking about the school librarian,” said Reynolds. “In full disclosure, the library wasn’t a place I frequented in school, but if I were in school today I’d practically live there, because there’s a good chance the coolest person in the building works where the books are. Not only can the school librarian help to curate a comfortable and welcoming space for all students, not only can they usher them to a vast array of books and reference materials, librarians also usually have the ability to connect with students on a personal level, because, well, they’ve read the most stories, which makes their potential for empathy and openness ceiling-less.”

During an interview with the National Book Foundation, Reynolds was asked who he wrote “Ghost” for. He replied, “I wrote ‘Ghost’ for all the young people who feel like they’re suffocating, who feel like they’re gasping for breath, exhausted from running for their lives, and sometimes FROM their lives. It’s for both the traumatized and the triumphant.”

As he writes on his website, Reynolds’s master plan is to not write boring books. His plan is working. Along with being a New York Times bestselling author, Reynolds is a National Book Award Finalist (“Ghost” in 2016, “Long Way Down” in 2017), a Kirkus Award winner, a Walter Dean Myers Award winner, an NAACP Image Award Winner, and the recipient of multiple Coretta Scott King honors. Recently, the movie rights to “Long Way Down” were optioned by Universal Studios and the film will be co-produced by Michael De Luca and John Legend.

AASL President Steven Yates shared his thanks to Reynolds, saying, “As one the thousands of school librarians who was captivated by Jason at the AASL National Conference in Phoenix, I am honored that he continues to share his time with us by serving as the national spokesperson for School Library Month. Reynolds’s masterful writing and enthralling speaking remind us to extend grace to our students whose lives are more complex than we will ever know. What a wonderful mantra for all parts of our lives. Please join me in thanking Jason for his continued support of school libraries as we celebrate School Library Month.”