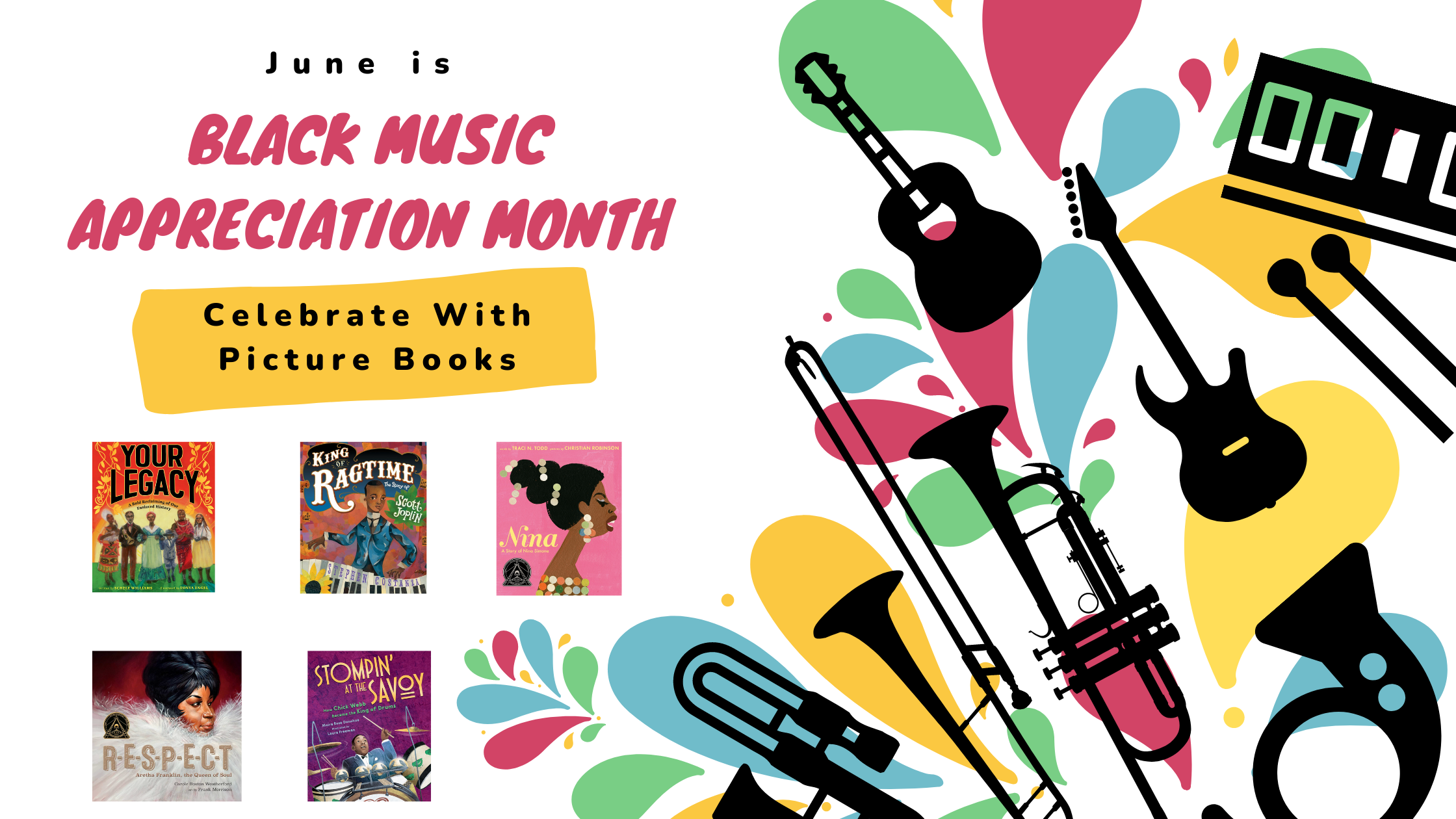 Think of your favorite picture book about a Black musician. What do you love about the story? This month, honor Black Music Appreciation Month by sharing a favorite title.

President Joe Biden proclaimed June 2022 as Black Music Appreciation Month. “I call upon public officials, educators, and all the people of the United States to observe this month by honoring Black Musicians and raising awareness and appreciation of Black music.” (Biden, 2022).

Below is a list of compelling picture books about music in our country. Learn how Black musicians influenced American music by reading these wonderful titles. Tie these books with an inquiry lesson to meet the AASL Standards Framework for Learners. Begin each story by asking learners what questions they have about Black music. Research any lingering questions. 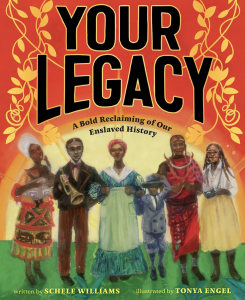 Your Legacy: A Bold Reclaiming of Our Enslaved History

Did you know that enslaved Black people communicated with each other through song? In Your Legacy, author Schele Williams explains that slaves did not speak the same language. Music provided a way of communication. Slaves joined in song to find strength and to plan escapes.

Although music is not the focus of Your Legacy, the story includes the role music played in Black history. Readers will appreciate Tonya Engel’s illustrations that add depth to the narrative. An evocative spread shows musical notes snaking around slaves in a field of cotton. Another image displays notes floating in the air while slaves sing in code during an escape. 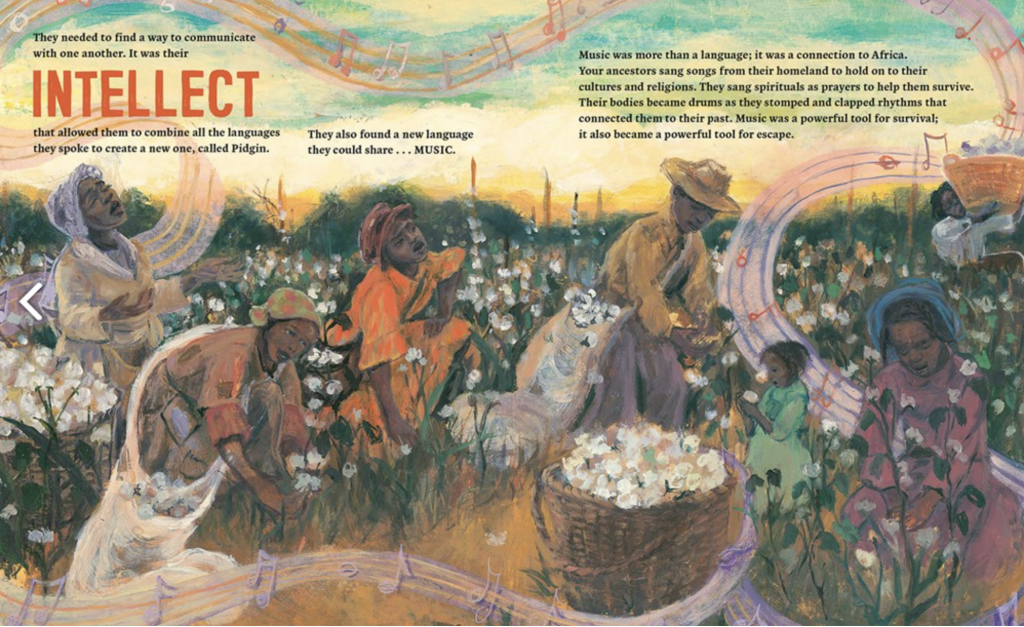 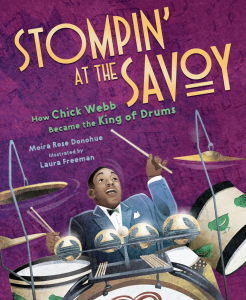 Stompin’ at the Savoy: How Chick Webb Became the King of Drums

If you lived in Harlem in the 1930s, you may have found yourself swing dancing to the music of Chick Webb. He was a legendary jazz drummer and band leader who played at the Savoy Ballroom. In Stompin’ at the Savoy, author Moira Donohue presents a fascinating story about Webb.

Webb had a disability that stunted his growth. He started drumming at a young age to strengthen his arms. Without money for a drum set, Webb improvised. He drummed with anything he could find. Sometimes, Webb took his drumming to the streets. People enjoyed his improvisational skills and paid him for his performance. Webb used that money to buy a drum set.

Soon, Webb became an exceptional jazz drummer. He later started a band. His music had everyone swinging.

Readers will love the interesting illustrations by Laura Freeman. It’s clear that she researched the story before creating her digital images. The textures and patterns embedded within the images bring Chick Webb’s music to life. 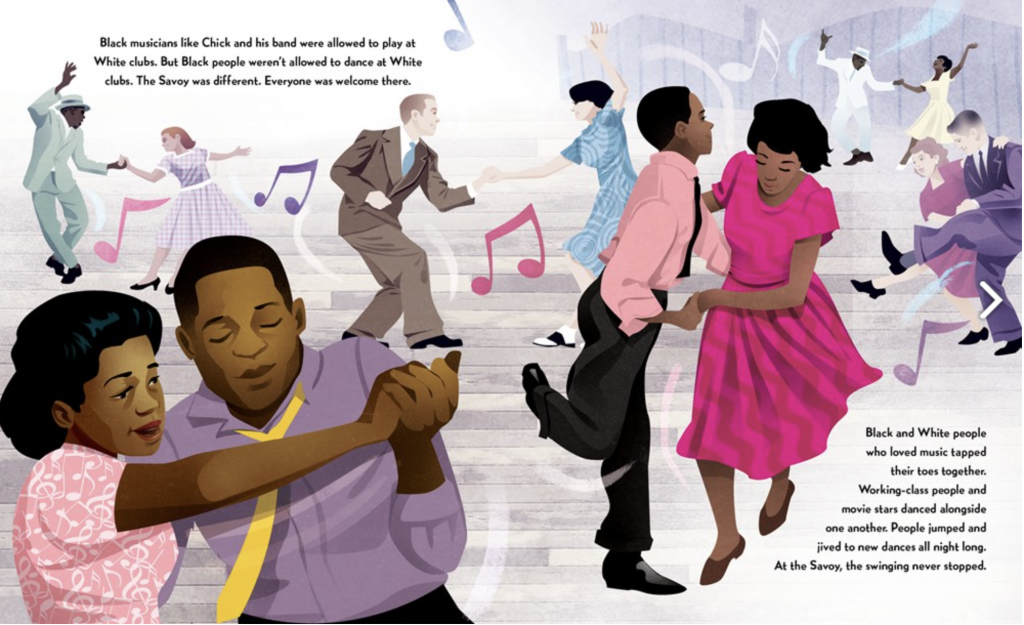 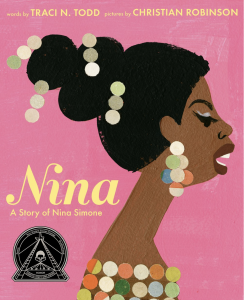 Nina: A Story of Nina Simone

Nina Simone was a tremendous musician who used her voice to sing for justice. In Nina: A Story of Nina Simone, author Traci N. Todd presents a story of how racism shaped Simone’s music.

Growing up as Eunice Kathleen Waymon in the 1930s and 1940s, Waymon was polite and followed the rules. She learned classical music and performed at her church.

Waymon’s music changed when she was denied admission to the school of her dreams. She heard she was not admitted because she was black. This decision changed everything for Waymon. Her music changed, and so did her name. Now she was Nina Simone, and she was no longer polite.

Todd tells Simone’s story in an engaging way that all readers will love. She includes more information about Simone at the end of the story.

Captivating illustrations by Christian Robinson capture the feelings of the characters. Readers will love the fascinating details in the artwork that enrich the story. 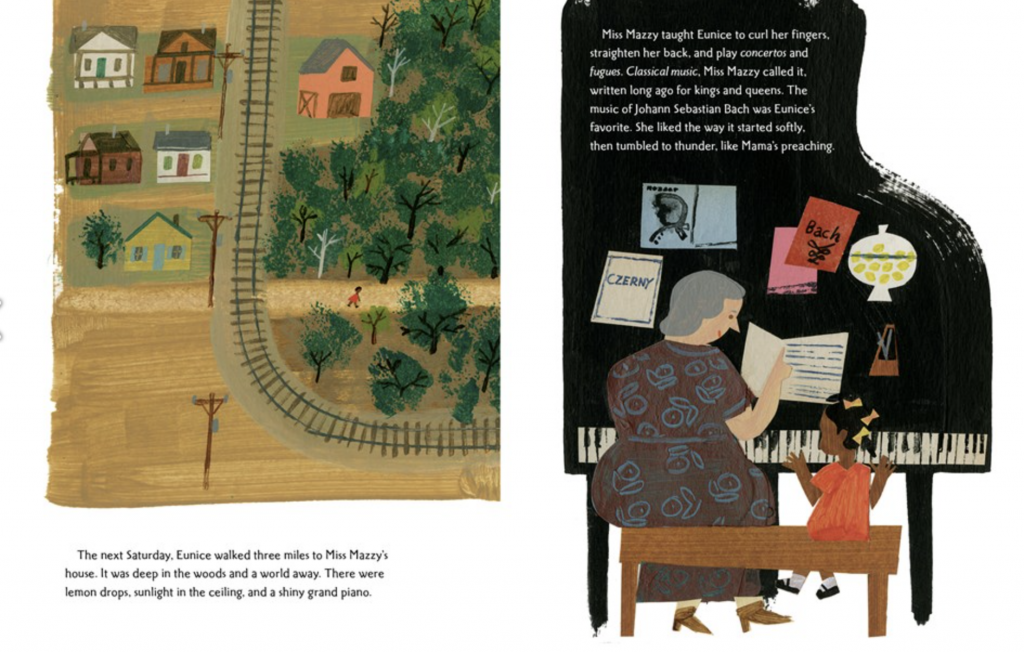 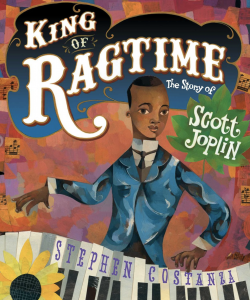 King of Ragtime: The Story of Scott Joplin

Have you ever played music while cleaning? In King of Ragtime, we learn that young Scott Joplin composed music to go with housecleaning chores. He made up tunes on the piano while his mom swept, dusted and mopped.

Joplin grew up in a home that was full of music. Everyone played an instrument; including the baby who banged spoons. His father, a former slave, performed in the “big house.” He taught his family the songs he played there.

Joplin’s mother worked as a housekeeper. She brought Joplin along to help. Joplin was fascinated by the piano in the grand house. He loved making up songs to accompany the sweeping and dusting. This was when Joplin fell in love with composing piano music.

Stephen Costanza is the author and illustrator of King of Ragtime: The Story of Scott Joplin. The illustrations in this book are a real treasure. Some double-page spreads resemble colorful quilts, while others favor cartoons from the 1970s. Readers will delight in exploring the interesting details while learning about Joplin’s musical journey. 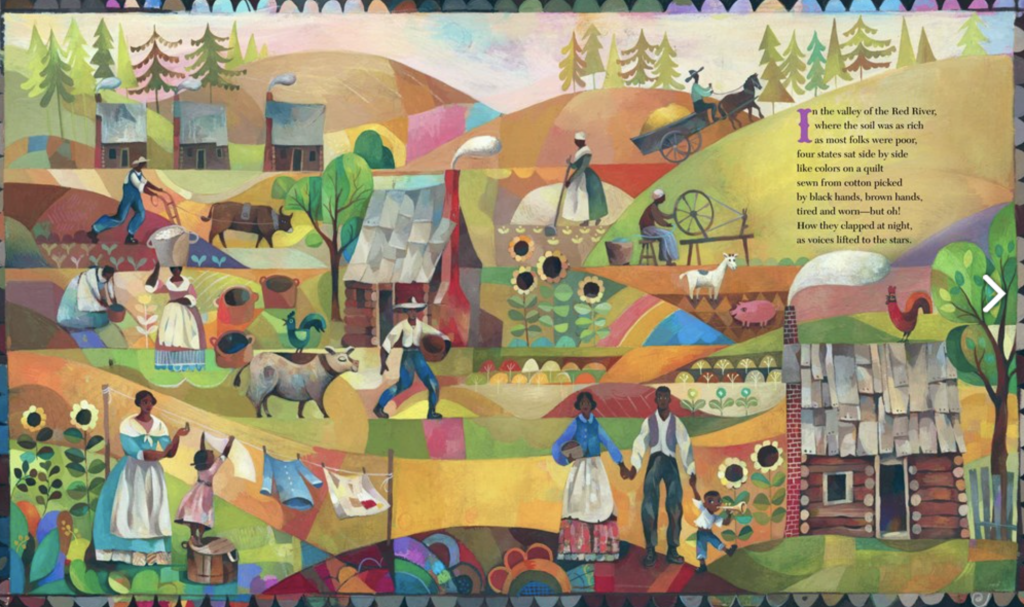 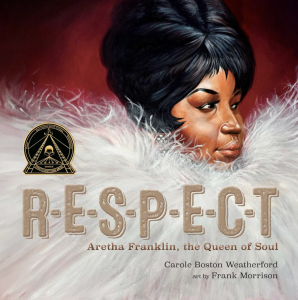 Imagine recording your first record album at the age of fourteen. That’s what Aretha Franklin did, and that deservers respect!

In R-E-S-P-E-C-T, author Carole Boston Weatherford tells the story of Aretha Franklin in verse. Each double-page spread features a descriptive word followed by rhyming stanzas. All stanzas end with the long “e” sound. The result is an interesting text structure that will captivate readers.

The gorgeous illustrations by the talented Frank Morrison make the story pop. It’s fascinating to see how Morrison brings light into his paintings. Readers will pore over this treasure many times.

What is your favorite picture book to read aloud about Black musicians? Please share titles in the comment box below.

Like Loading...
‹ Book Challenges: Lessons from a Panel Discussion
Use your Voice! We Need Accurate Narratives of the School Library ›