Home › Uncategorized › 5 Things I Learned Being on an Interview Committee

5 Things I Learned Being on an Interview Committee 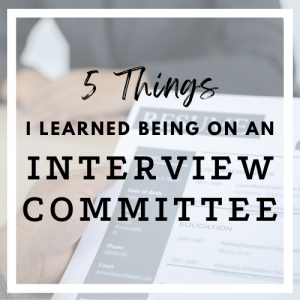 If you are like me you have interviewed for your fair share of teaching positions or professional programs.  If you are also like me, you may have never been on the other side of things where you are the interviewer.  This past school year I had the opportunity to serve on two different interview committees.  I had never done this before so this was a great learning experience for me.  Here are five things I have learned from serving on an interview committee:

This may seem obvious, but in both committees I had the opportunity to review several resumes and cover letters before the first round of interviews began.  It became clear to me that if I moved through them too quickly they could start to blur together.  So in each case, I would review the submissions and jot down my thoughts on a separate sheet of paper.  It would be a quick first feeling.  I would determine whether the person was qualified for the position and what experiences they had that would make them a good fit.  I included a detail or two that would help me distinguish them from other candidates.

My school had each committee member fill out a Google Form sharing if we thought the candidate should have the first interview.  Based on these results, I would then go back through the resumes and cover letters to make sure I knew each candidate’s specific qualifications in detail before they were interviewed.

In both of my experiences, I was not the leader of the committee, but knew the plan and understood the process.  This type of communication made things organized and the expectations clear.

Figure Out the Deciding Factors

There are so many questions you can ask a candidate and only so much time!  You may not get to them all! It was beneficial to everyone to know what three or four things the group wanted to find out to determine if the candidates were the right for the job.  For example, if it was a teaching position you may want to know their approach to classroom management to see if it fits your school culture.  If it’s a school librarian position, you might want to see how they would approach collaboration with teachers.  These clearly defined factors made determining the types of questions to ask easier.

It was helpful that the leader of each committee created a Google Doc with possible questions before each interview.  Then they had other members share their ideas as well.  The questions were narrowed down to focus on what specifically the group was looking for.

Once the questions had been determined it was decided which of the committee members would share each one.  This was helpful because it made the interview flow smoothly.  No one had to guess when it was their turn to talk.

One observation I made in this process, was that the best interviewers made the question feel conversational.   They would tie their question into something the candidate had already shared or would have a leading phrase.  This allowed it to feel like they were not just playing 20 questions with the candidate but instead having a natural conversation.

Just as much as you are deciding who would be the best candidate for the position the candidate is also deciding if they would want to take the position if offered.  As a committee member, I realized that I was representing the organization that I work for.  I needed to share the things that make us great but also be honest.

Each of the candidates was given an opportunity to ask questions to the committee.  Some of their questions included things that shared both positive and negatives about the position.  It is important to be honest so they have an understanding of what the expectations are and the realities that the position includes.  That way you can find a candidate that will feel comfortable and can be successful in the role.

You Have to Make a Choice

Hopefully, you are not doing this alone because it definitely helped that there was time to discuss together the thoughts about each candidate.  There were things with all of the candidates that other committee members noticed that I missed.  Additionally, there were things I was able to point out in my role that others had not thought of.  Sharing was an important part of the process.

In both of my experiences, there was a second Google Form sent to each committee member to fill out on their own.  It had them rate the candidates based on the deciding factors and give overall thoughts.  The toughest thing for me was actually making a choice.

Maybe it is the school librarian in me, but I am the type of person who wants to give everyone a chance.  So actually picking someone was tricky!  I also had to take out any personal thoughts or feelings to be as objective as possible.  In the end, I had to trust the information I had gathered and professional decision-making to determine the best choice.  I knew that all of the other committee members were doing the same.

Have you ever been on an interview committee? What tips do you have to share?

I am the librarian at Detroit Country Day Lower School in Bloomfield Hills, MI. I have worked as a school librarian for the past eleven years. I was a classroom teacher for four years prior to that. I have worked in charter, public, and private schools. My favorite thing about being a school librarian is the opportunities I have to work both with students and teachers. I love the co-teaching opportunities and connections I have been able to make! I have served on AASL committees as a member and chair. I currently serve as secretary of my state association, MAME.