A Compelling and Timely Nonfiction Title for Your High School Collection 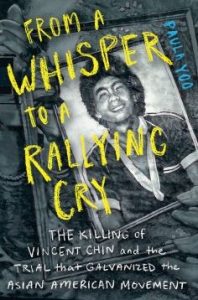 I’m a former social studies teacher, so it’s not surprising that I’m a current events junkie and a history buff. I guess that’s why I get excited when I read a book that touches on both of these interests and helps the reader draw parallels between the past and the present. If such a book is a compelling new young adult title, then I recommend it to all of my librarian friends. From a Whisper to a Rallying Cry: The Killing of Vincent Chin and the Trial that Galvanized the Asian American Movement by Paula Yoo checks off all those boxes.

The narrative explores a little-known, watershed event in American history: the murder of Vincent Chin in Detroit. June 19, 1982, was the night of twenty-seven-year-old Vincent Chin’s bachelor party. He and three friends went to a strip club, where they encountered two white men, Ronald Ebens and his stepson, Michael Nitz. Ebens was a foreman at Chrysler, one of the “Big Three” automakers that was struggling financially due in part to competition from Japanese automakers. Nitz had recently been laid off by Chrysler.

An altercation broke out after heated words were exchanged between Chin and the two white men. Both parties were kicked out of the club. In the parking lot, Nitz grabbed a baseball bat from his car, and Chin ran. A short time later, Ebens and Nitz caught up with Chin. Ebens beat Chin so severely with the bat that he lapsed into a coma and died four days later.

Ebens and Nitz pleaded guilty to manslaughter. Each man was sentenced to three years’ probation and a $3,000 fine. The lenient sentences sparked outrage, especially in the Asian American community, leading to the founding of a grassroots advocacy organization called American Citizens for Justice (ACJ). ACJ lobbied for a U.S. Justice Department investigation to determine if Ebens and Nitz had violated Chin’s civil rights. When the Justice Department filed charges against the two men in 1984, it was the first time federal civil rights charges were brought against someone for violating the civil rights of an Asian American. Although Ebens was found guilty and sentenced to twenty-five years in prison, he was acquitted in a second trial ordered by an appeals court due to charges of witness tampering. In the end, neither Ebens nor Nitz spent any time in prison.

Paula Yoo’s extensive research included reading news reports from the time period, poring over the trial transcripts, and interviewing people who were involved with the case. The result is a compelling and comprehensive exploration of Chin’s murder and its aftermath, especially the pan-Asian American movement that formed and evolved in the wake of the lenient sentencing. She presents not just the story of a heinous crime, but a story of how real people were affected by the crime. This includes Lily Chin (Vincent’s mother); Gary Kouivu (Vincent’s friend); Helen Zia, Roland Hwang, and Jim Shimoura (three of the Asian American activists who founded ACJ); and Ron Ebens and Michael Nitz.

Yoo is a master storyteller. Her research provides context and detail without ever bogging down the narrative. I did a little internet research on the case before reading the book, so I knew what was going to happen. Nevertheless, I could not put the book down. Yoo uses the words of witnesses, attorneys, and others to lay out the facts and make the legal arguments for both sides. This approach allows readers to draw their own conclusions about the question at the heart of the case: Was the murder of Vincent Chin the result of a hate crime or of a barroom brawl gone too far?

The compassion with which Yoo recounts the case is impressive and thought-provoking. For example, her depiction of Lily Chin (Vincent’s mother) as heartbroken and brave is very moving. More notably, instead of portraying Ebens and Nitz as evil, which would have been easy to do considering the nature of the crime they committed, she takes a more nuanced and humanizing approach. In an article about the book, author Samantha Pak, who interviewed Yoo, notes that one thing From a Whisper to a Rallying Cry has taught Yoo is that “compassion and justice are not mutually exclusive. You can be compassionate toward a perpetrator and still be angry that justice had not been served.” What an intriguing idea to explore with students!

Although the book focuses on a crime that occurred almost forty years ago, it is nevertheless timely. Last month (May 2021), Congress passed and President Biden signed the COVID-19 Hate Crimes Act. The legislation is designed to combat threats and violence against Asian Americans and Pacific Islanders, both of which have spiked since the onset of the pandemic (Sprunt 2021). Imagine working with a social studies teacher to have students read about the Vincent Chin case in the context of anti-Asian sentiment in 1982 and comparing that to the events and political environment that led to the COVID-19 Hate Crimes Act.

From a Whisper to a Rallying Cry is an important book to share with students and teachers. It will appeal to many nonfiction lovers and will likely lead to some excellent classroom lessons and discussions. If you don’t have a copy in your library, add the title to your next order list.