A new year means lots of new books! Here’s one title I read an advance copy of in 2022 and loved. I’m looking forward to promoting it to students and teachers in 2023. 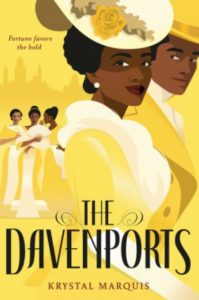 Set in Chicago in 1910, this delightful YA romance novel tells the story of an elite and wealthy Black family. The family patriarch, William Davenport, was enslaved as a child and eventually founded the successful Davenport Carriage Company. The narrative focuses on William Davenport’s children and their friends.

Nineteen-year-old Olivia Davenport is beautiful and well-versed in the social graces. She is expected to find a suitable husband, and has found a promising prospect in Jacob Lawrence. But, when she finds herself attracted to a civil rights activist, she begins to questions what she really wants in life.

Helen Davenport, Olivia’s younger sister, is a talented mechanic with a good head for business. She wants to work for the Davenport Carriage Company like her brother John does, but she’s sure her father would never allow it. Instead of emulating Olivia as she is expected to do, Helen is secretly helping John with his job. Because she has always been career-focused, Helen is disquieted when she finds herself attracted to Olivia’s suitor.

Ruby Tremaine, Olivia’s best friend, also comes from a socially prominent Black family, In fact, her father is running for mayor of Chicago, a campaign that has caused financial hardship for her family. Ruby’s parents want her to marry John Davenport. Ruby wants that too, but making Olivia and Helen’s brother fall in love with her isn’t as easy as she would like. So, when a young lawyer named Mr. Barton shows an interest in her, she decides to use him to make John Davenport jealous.

Amy Rose has grown up with Davenport sisters. Her deceased mother was a maid in the Davenport house, and now Amy Rose serves as a maid to her two childhood friends. But Amy Rose has bigger plans — she wants to open her own beauty salon catering to Black women. She won’t let anything get in the way of her dream, including her attraction to John Davenport.

Krystal Marquis explains in the author’s note that she wanted to provide readers with the the type of representation she wishes she’d seen as a teen. She has certainly succeeded. Marquis expertly blends memorable Black characters with elegant settings, romantic entanglements, coming of age struggles, constraining gender norms, and the history of the early 20th century civil rights movement. In doing so, she has created a uniquely American story that is sure to appeal to historical fiction and romance readers, particularly those who are fans of Downton Abbey and/or Bridgerton. Moreover, The Davenports may also appeal to readers who don’t generally gravitate  towards historical fiction or romance. The likeable but realistic characters and their desire to chart their own courses hold universal appeal.

Marquis also mentions in the author’s note that her characters were inspired by William Patterson and his family. William Patterson escaped slavery as a young man and later founded the C.R. Patterson & Sons Carriage Company. This interesting fact may spark enough curiosity to motivate readers to learn more about Patterson as well as other African Americans who achieved success during the late 19th and early 20th centuries.

My only frustration with this book is that because I didn’t know it was the first in a series when I read it, I wasn’t expecting by the cliffhanger ending. The sequel cannot come out soon enough!

Thank you to NetGalley for providing me with an electronic advance copy of this book. The Davenports will be published on January 31, 2023.