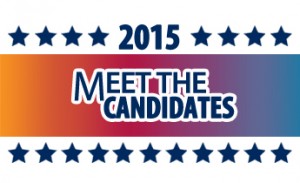 The 2015 ALA/AASL Election is quickly approaching. As many were not able to attend the AASL Candidates Forum at Midwinter, we wanted to use this public forum as an opportunity to introduce the candidates running for AASL offices. Each candidate was given the opportunity to respond to this question: If elected, what will you do to advance AASL’s new mission to empower leaders to transform teaching and learning? Read their responses and vote beginning March 24. Today we hear from:

Through my work as ISS Secretary the past two years, I have developed the confidence and gumption to be more of a library advocate in my school, my community (as a public library board member), and even within ALA (supporting teen services and school libraries at National Library Legislative Day with YALSA). As chair-elect for ISS I would do my best to embolden our membership with opportunities to become advocates for themselves and their programs, encouraging them to be leaders at all levels, whether it is their first, tenth, or thirtieth year at their school. I would support continued discourse through our vital discussion list as well as through promoting attendance at ISS conference programs and other networking occasions. I’d also like to reach out to other groups who may have similar missions to grow our respective communities and learn from each other. I look forward to enthusiastically serving as the Independent School Section’s next chair-elect.

From Robert Hilliker, Candidate for Independent School Librarians Section (ISS) AASL Board Representative
If elected I will work to strengthen the collaborations between librarians in Independent Schools and those in Public Schools. Though the challenges we face differ in scale, they are largely the same challenges and I believe that we can generate more and better ways to pool our efforts and our resources to meet them. One way I see to move forward on this is to find more cost effective ways to support the kind of multi-site, synchronous programming that made last year’s Fall Forum a much richer and more broadly attended event. As we have seen in the past, when we work together, our power to act as a lever of change is exponentially increased.