From June 22-27, I attended the American Library Association (ALA) Conference in Chicago along with over 22,700 other US and international librarians and vendors. My main purpose was to learn to become an effective chair of the ALA Intellectual Freedom Committee (IFC). Current chair Pam Klipsch, director of the Jefferson County Library in Missouri, graciously allowed me to shadow her as she carried out conference responsibilities. Along the way, I also participated in other conference activities—programs, receptions, the conference exhibits, and sharing meals and social time with friends.

What do you know about the Intellectual Freedom Committee (IFC)? The IFC is a committee of the ALA Council, the governing and policy-making body of the association. The IFC guards, promotes, and educates members and the public about two of ALA’s core values: intellectual freedom and privacy. It was responsible for creating the 28 interpretations of the Library Bill of Rights. The committee drafts interpretations and Q&A’s, and through various means, seeks Council members’ comments. The IFC takes councilors’ recommendations into consideration as members rework the documents. After intensive wordsmithing, the document(s) are submitted to the Council for its consideration and approval. 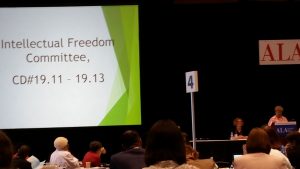 Through the committee’s efforts over the last year, two more Library Bill of Rights interpretations were written. On the final day of the conference, Pam Klipsch presented them to the Council and answered questions; the interpretations were approved unanimously. The newest interpretations are “Politics in American Libraries” and “Equity, Diversity, and Inclusion.”

June 26, 2017 was the twentieth anniversary of the US Supreme Court’s decision declaring the Communications Decency Act (CDA) unconstitutional. ALA and the Freedom to Read Foundation (FTRF) were both part of the defense of the First Amendment. To commemorate the event, the IFC wrote a resolution titled “A Tribute Resolution Celebrating the 20th Anniversary of Victory in the Communications Decency Act (CDA).” It was entered into the Council record.

The IFC has a Privacy Subcommittee that assumes a wide range of responsibilities including “monitoring privacy developments in legislation, identifying privacy needs and resources for librarians and library users and developing educational, informational, and promotional projects addressing privacy, confidentiality, and data security issues…” (IFC Privacy Subcommittee). In the last two years, it created privacy guidelines and checklists (in cooperation with the Library Information Technology Association (LITA)). As chair of the IFC, I’ll be working closely with the subcommittee. 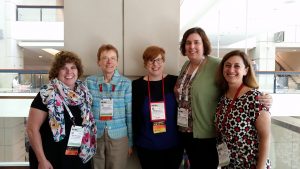 The IFC also has “working groups” that take on special projects. For example, the Selection Policy Working Group is revising and expanding the current ALA Workbook for Selection Policy Writing. When completed, the renamed “Selection & Reconsideration Policy Tool Kit for Public, School, & Academic Libraries” will provide guidance for all types of libraries. All work has been completed virtually, but four of the group (Jean McFarren, April Dawkins, Lisa Errico, and I) plus OIF staff liaison Kristin Pekoll, met, some for the first time, and had lunch together.

Learning to Become an ALA Chair

On June 23, the ALA Training, Orientation and Leadership Development (TOLD) Committee held an intensive two and one-half hour luncheon training session and provided attendees with many leadership resources. Then ALA President-Elect Jim Neal addressed the group laying out the extensive changes occurring within the association, such as searching for a new ALA Executive Director and hiring the new head of the Washington office. Externally, libraries face legislative, privacy, and other challenges and need to build coalitions beyond ALA’s traditional partners. In a brief private conversation with Jim, he indicated a desire to have the IFC create a statement on Net Neutrality from an intellectual freedom perspective.

Friday evening Jim Neal sponsored a reception for ALA chairpersons and also invited library science students who were interning at the conference. During the reception, I met graduate students Debby Harris and Erica Saito. Debby was assisting at the AASL awards program, and Erica was helping set up for the reception honoring recipients of the Andrew Carnegie Medals for Excellence in Fiction and Non-fiction. Neal’s idea of creating a social space to mix current leaders with those who will soon be entering the profession is excellent and should become an ALA tradition.

The chair of the IFC serves as an ex-officio voting member of the Freedom to Read Foundation (FTRF). Having been a member of the FTRF board of trustees for four years, I am familiar with its purpose and work. Annually FTRF awards the Gordon M. Conable Conference Scholarship to a library school graduate student or new library professional. In addition to financially supporting the recipient’s ALA conference attendance, FTRF also provides a mentor. The 2017 recipient is Kate Davis. She is a recent MLIS graduate from the University of Denver and in the fall will become a school librarian in Nigeria. Prior to and during the conference, I had the honor (and fun) of mentoring her.

The IFC chair also participates in the broader intellectual freedom community through involvement in the Intellectual Freedom Round Table. IFRT members are intellectual freedom advocates, and the chair of the round table is a liaison to the IFC. During the IFRT member reception, Bob Doyle, executive director of the Illinois Library Association and author of the banned books resource guides since 1982, received the IFRT Immroth Award (ALA).

IFRT promotes the Leroy C. Merritt Humanitarian Fund (or Merritt Fund for short). The fund provides financial support to those who experience discrimination or are “denied employment rights because of defense of intellectual freedom” (IFRT Merritt Fund). During the IFRT awards’ reception, IFRT solicited funds to support the work of the Merritt Fund.

My time in the exhibits was limited this year, but I want to give a shout out to the Library of Congress, NASA, and the Little Free Libraries exhibits at which I stopped. As I wandered through the aisles, I found a huge sign where many conference attendees stopped for a photo. There is no doubt that the Findaway exhibit poster is correct—“Librarians are superheroes!” 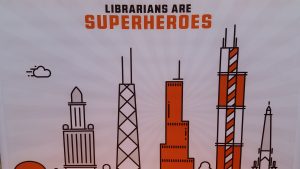 I’m home from the conference and considering what I learned. As I work through this year as chair of the Intellectual Freedom Committee, I already know that I am grateful for the mentoring by former IFC chair Pam Klipsch. As Pam told me at the time of my appointment, “It is a lot of work, no doubt of that. But it is incredibly satisfying for me to be able to do my share to advance the cause of intellectual freedom” (Klipsch). Those words echo my feelings.

Like Loading...
‹ A Peek into the Future School Library
Confessions of a Librarian Who Does Everything Wrong ›