Home › Blog Topics › American Dirt: To Read or Not to Read?

American Dirt: To Read or Not to Read?

Is That the Question?

Last month, I was scrolling through Twitter and found Oprah promoting American Dirt. A thriller about immigration that hooked her on the first page? I’m in. I immediately ordered it on Amazon and went back to reading comments online about the book.

After reading negative comments about how the book misrepresented the immigrant experience, I canceled my Amazon order.

Let me repeat that. I read negative comments about a book and decided that I would not read it!

My actions disturbed me.

I am a reader, a writer, and a librarian. This past month, the controversy surrounding the book, American Dirt by Jeanine Cummins, has made me reflect on all three roles.

As an avid reader, I love that I can walk into a library or a bookstore and choose any book to read. There are some places in the world where people do not have that freedom.

Typically, I am a very eclectic reader and let my mood influence what my next book will be. When choosing a new book, I usually don’t pay attention to who the author is until after I finish reading the book. If I like the book, I will research the author to see if they have written any other books.

As a writer, I understand how difficult it is to put a piece of writing out into the world for everyone to read, and criticize. A piece of yourself is out there on display. (Writing this blog post is terrifying.) We become so connected to our writing because of the time and energy spent creating it. So I sympathize with how Jeanine Cummins must be feeling.

As a school librarian, it is my job to make sure that the books I curate for my library allow every student to see themselves reflected in a positive way through literature.

My duty is to uphold the Library Bill of Rights. I should challenge censorship, and provide materials that represent all points of view, regardless of background, origin, or opinions.

Yet, here I am, censoring myself by deciding not to read American Dirt because of other people’s opinions.

People are upset because an author wrote about a group of people that she is not a part of. This escalated into threats, which caused her book tour to be canceled. Bookstores are pulling her books off the shelves. What’s next? Public book burnings? The mob mentality that has surrounded this book is frightening. People are making rash decisions without having actually read the book. This concerns me.

According to an interview on NPR, Jeanine Cummins said, “I endeavored to be incredibly culturally sensitive. I did the work. I did five years of research. The whole intention in my heart when I wrote this book was to try to upend the traditional stereotypes that I saw being very prevalent in our national dialogue.”

However, the conversations I am hearing state certain stories should only be told by certain people.

There have always been stories written by writers who do not represent the characters in their books. But this is how doors are opened. They create a world that allows others to see something that they would never have seen before.

Ezra Jack Keats, used his privilege as a white man to write The Snowy Day in 1962, which broke a huge barrier in children’s literature. At the time, the publishing industry would never have allowed a black man to tell that story. Ezra Jack Keats opened a door, and without that door being opened, we wouldn’t have the beautiful children’s books we have today told by authors of all races and genders.

Is there a right way and a wrong way to write about marginalized people if you are not a part of that group? Yes. Wendy Lu has a great blog post called “Writing from the Perspective of Characters in Marginalized Populations” that addresses this topic.

The Reader Gets to Choose

The past couple of weeks, I have read many different articles about the good and bad of American Dirt. There are bookstores on social media posting that they are pulling the book from their shelves. A librarian posted her criticism of the people who were checking the book out. I found a positive post by Scuppernong Books that contained American Dirt displayed alongside better written immigration stories. 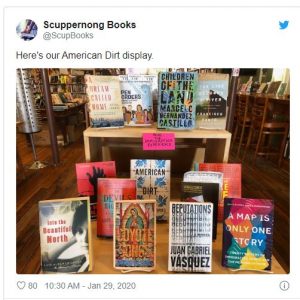 The bottom line is that the reader should get to choose. If we start taking books off the shelves because they are too controversial, then we are taking away the reader’s choice and the writer’s voice.

Read the Book First, Then Discuss

I shared my concerns with my husband about reading American Dirt. He said, “Just read the damn book and stay off the Internet!” He is right. To fully understand and participate in the conversations around this book, I need to actually finish reading it instead of the articles about it.

I am not here to debate whether Jeanine Cummins should have written this book, because I do not have the right to do that. She is allowed to write whatever she wants. When I finish reading the book, I will look forward to having discussions about her writing, with other people who have read it.

Despite all of the backlash American Dirt has gotten, there is a silver lining. For the first time, as a nation, we are having an open dialogue about what needs to change in the publishing industry. Communication is the first step in changing the world.

“Freedom is not worth having if it does not connote freedom to err.”
–Mahatma Gandhi

Colleen R. Lee is a former middle school English teacher and Elementary Teacher. She is currently the Elementary Librarian at Greenfield Elementary School in Chesterfield County, VA. Follow her on Twitter @MrsLeesLibrary.