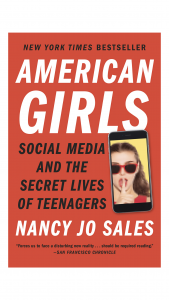 A few years ago, Nancy Jo Sales took on a bold and, some would consider, terrifying task. She spent hundreds of hours interviewing over 300 girls between the ages of 13 and 19 for one purpose: to uncover the digital life of American teens, with an explicit focus on that of teenage girls in America.

Her book, American Girls: Social Media and the Secret Life of Teenagers, is a rich yet raw synopsis of those interviews, revealing major fractures in American culture that both teens as well as those who work with them must face in order to survive – physically for some, and emotionally for all. Though many of the details and scripted exchanges between interviewees can be quite shocking, I found this book to be one of the most essential for anyone who is working with teenagers or young adults. Well-written and logically organized, it provides exceptionally valuable insight into the mindset of this age group.

Sales explains that the oversexualization we see of girls these days takes root in the tech bro/bro-grammer/frat boy culture that exists in Silicon Valley. All current popular social media apps and nearly all social media apps altogether are created and managed by tech executives, 83% of whom are white males. She makes valuable points about the clear connection between the tech industry’s frat boy culture and the rampant sexism found in many apps on the market. (Two she mentions are Hot or Not and Titstare; others include MakeMeThinner, ShakeThatBooty, iControlHer, etc.).

This is also related to the normalization of pornography in modern society, which is damaging to females of all ages and specifically to the formation of healthy attitudes toward and understanding of sex among teenagers. Sales reports a rise in sadomasochism toward girls in both what is produced as well as what is searched online. Social media sharing apps and internet connections on smartphones has created wide access to and consumption of pornography among teenagers, but their built-in cameras have also sparked an unbelievable amount of pornography creation. Many teens aren’t just looking at porn, they are also producing it through sexting.

The girls Sales interviewed shared the rampant prevalence of boys asking girls for nude pictures of themselves, or the boys sending genital pics of their own as an invitation for the girls to do the same. The legal system is confounded by this. Sexting does equal the creation, solicitation, and distribution of pornography, which is a serious criminal offense. Yet, local law enforcement officers are overwhelmed by the sheer number of teens engaged in it and do not want to criminalize young juveniles, especially when labeling these kids as sex offenders would create lifelong consequences. It is also interesting to note that many girls with whom Sales spoke reported that the prevalence of sex available online is causing a breakdown in traditional courtship and dating relationships. Teenage girls and young women spoke of being treated like an option to guys rather than a priority. This is certainly indicative of the declining numbers of monogamous relationships we see in American society today.

Even if you remove the sexual aspects of how teens are using their phones, it is important to understand the depth of the emotional attachment they have to their devices. In 2015, 88% of teens ages 13-17 had a mobile phone, and 92% of teens were going online from a mobile device daily. Girls reported sending 30-100 texts per day. As one teen described the constant distraction this causes, “Texting is like someone constantly tapping you on the shoulder and you have to look” (pg. 61).

Beyond the distraction of texting, girls also reported that although they feel that social media is destroying their lives; they won’t just leave it because then they believe the consequence would be social death. I found it very interesting that the interviewed girls were all painfully aware of their inauthenticity on social media. They agonize for hours over selfies (taking 50 just to get the one they finally post), filters, hashtags, captions, and the underworld of what a girl can communicate by liking/not liking or commenting/not commenting on a friend’s or acquaintance’s (or even enemy’s) post. Every single post is a contest of likes, which frankly sounds both exhausting and miserable.

It is no surprise that girls suffer extreme mental anguish from the drama that unfolds through social media and texting. It is both amazing and terrifying the power social media has over teens, and especially teen girls. Eating disorders and other forms of self-harm are increasing exponentially, and optional reconstructive surgery for young girls is also on the rise. When “flawless” perfection is the goal, depression and anxiety are guaranteed side effects.

Sales also touches on parenting in the digital age, though briefly. She reports that 92% of American children have an online presence before they are two years old, which is a point of concern in the areas of safety and privacy at minimum. On a deeper level, however, this is a direct correlation to the social media crisis we see our teens struggling with today.

Cyberbullying is another focus of this book, and Sales refers to suicides caused by cyberbullying as cyberbullycide. Again, girls are more often victims than boys in both cyberbullying and related self-harm. Most of the cyberbullying that occurs focuses on insults that accuse “promiscuity or perceived promiscuity” and the girl’s physical appearance (pg. 129). Exclusion from parties or events (and then the public exhibition of that exclusion through posting group pictures on Instagram) is one of the more passive-aggressive forms of cyberbullying. There is also an unprecedented number of incidences of girl-on-girl violence, many of which are published to video-sharing sites like Instagram, Vine, and Youtube.

At one point Sales delves into the history of photography altogether, from its conception to the point of availability of cameras for the general population. The invention of the Instammatic camera brought amateur photography (and selfies) into the hands of all people. That event, along with Kodak’s marketing campaign in the late 60s to create and preserve memories in which the customer looked good, marks the creation of the mindset that “cameras are tools for creating an idealized self” (pg. 78). The invention of smartphones and social media apps did not create this mindset, but they have certainly thrown fuel on the fire.

The increasing reliance upon apps and the phone world version of a social life is reducing our teenagers’ abilities to communicate face-to-face with one another or with adults. Basic communication skills, interpersonal skills, and nonverbal cues are being lost by teenagers and young adults. This changes how we teach as well as how we participate in discussions on deeper-meaning issues.

The work of Sales in her research for this book proves that while communicative technology is not the problem, an unbalanced focus on it (by teens, parents, and adults in general) is. It provides an understanding of just how deep and dark the social media world can be for teenagers, especially for girls.

My own reflection of this book is that of appreciation that Sales went where few have dared go before in her study and exposure of the raw world of teen social media. Understanding the weight of what teens experience in the digital world helps us serve them better. I know to choose instructional strategies that incorporate more face-to-face discussion among my high school students, to help fill the widening gap in their ability to converse. I can be a better advocate for teens in helping others understand their emotional and intellectual mindset in today’s modern digital culture. I can also design events and programs for my school that help teens understand this reality about themselves, and to challenge that reality through a more balanced approach to their social media use as well as developing a deeper perspective.

With 16 year of experience as a school librarian, Michelle has served students and teachers at the elementary, middle, and high school levels. She is a past President of Alabama School Library Association, has served as Region V Director for AASL, and currently chairs the Alabama Virtual Library Executive Council. A National Board Certified Teacher, adjunct professor for the University of Alabama’s School of Library and Information Studies, and graduate student pursuing a PhD in Instructional Leadership/Technology, she is always eager to discover and share the latest trends in school librarianship. Michelle is very passionate about her work as a school librarian at Helena High School in the Birmingham, Alabama area.