Book Talks for Black History Month and Beyond

As with many of the library book displays I create throughout the school year, the one for Black History Month generates comments mainly from teachers and administrators. Students come to my high school library with a purpose. Whether they are rushing to finish their social studies homework, studying for an AP lang test, bursting with a story to tell their friends, or looking to check out a specific book, they almost always head straight for a table, a computer, or my desk. It would be ideal if these abundant arrangements of books made their way into their minds subconsciously, but since that’s unlikely, I’ve found that walking around the library delivering brief book talks to groups of students is a sure way to introduce them to the wide variety of titles available to them. 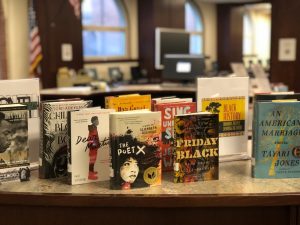 Here are some of the books I’ve been promoting this month with corresponding book talk narratives:

Homegoing by Yaa Gyasi. Have you ever read Things Fall Apart for English class? The beginning of Homegoing, centered around villages in the African country of Ghana, is similar to Chinua Achebe’s book in the way it shows African tribes and their customs. But then the action moves to America and highlights Harlem and other North American cities. It points out how African Americans in those places were affected by slavery. If you like multi-generational sagas like Game of Thrones, you’ll be fascinated by the tragic story arc in this book. It begins in 18th-century Ghana with two half sisters whose lives follow different paths, and traces the British involvement in the slave trade and the indigenous people’s connection to the horrific transactions that propelled slavery to places all over the world. The descendants’ stories are told from various perspectives, touching on the many different traditions, languages, and hardships of their times. Spanning hundreds of years, the characters’ journeys are woven together with a common thread that transcends time and place.

Pride by Ibi Zoboi. You may not know this but Bushwick, Brooklyn, is home to many Hispanic Americans. You’ve probably seen the New York City Puerto Rican Day parade on TV. Well, Bushwick hosts its very own Puerto Rican Day parade. Back in the 1970s there were major riots in Bushwick after a citywide blackout brought on vandalism and crime. By the 2000s, the community had improved because of city and state support. In Pride, the Afro-Latino Benitez family has lived in their rundown Bushwick apartment for years when a wealthy family moves into a newly built mansion across the street. The Benitez sisters are cautious of their new neighbors, annoyed with their displays of fancy cars and clothes. Zuri, especially, feels like they don’t belong in the tight-knit neighborhood. But when she begins to develop a friendship with Darius, Zuri realizes that not everything is as it seems. She is forced to become less judgmental as she looks past her preconceptions. This book is a modern-day retelling of Jane Austen’s Pride and Prejudice but whether you’ve read that classic or not (or seen the movie), you’ll love this contemporary adaptation.

An American Marriage by Tayari Jones. How frustrating is it when someone accuses you of something you didn’t do? Even worse, though, is when you’re unfairly punished for it and there’s nothing you can do about it. In An American Marriage that’s exactly what happens to Roy, one of the main characters, who is in Louisiana visiting family with his new wife, Celeste, when he is accused of a crime he did not commit. Despite a lack of solid evidence, he is convicted and given a 12-year prison sentence. At first his wife visits him regularly and the two write frequent letters to each other. But as time goes by, Celeste leans on Roy’s best friend for support, and her relationship with Roy begins to suffer. If you read or saw the movie The Hate U Give, you’ll be familiar with the theme of police brutality and the complicated details that surround the decisions law enforcement officials must make every day. This book is as thought-provoking and heartbreaking as Angie Thomas’s story and will ignite the same emotions as you read it.

Here are some other worthy African-American-themed titles to book talk throughout the school year with high school students: