Home › Blog Topics › Code of Ethics: The Foundation of Our Work

Code of Ethics: The Foundation of Our Work

IMPORTANT NOTE: I am in no way supporting the views of organizations that use hate speech or act in any way that is dangerous to others.

Several things have happened recently that led me to this post: 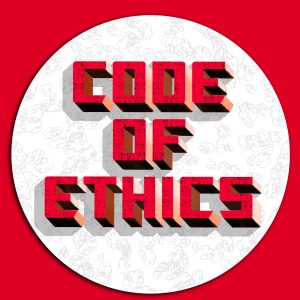 These three events share the same problem. Something that happens more often than you think. This is gatekeeping, a form of self-censorship.

From the Code of Ethics:

#2: We uphold the principles of intellectual freedom and resist all efforts to censor library resources.
#7: We distinguish between our personal convictions and professional duties and do not allow our personal beliefs to interfere with fair representation of the aims of our institutions or the provision of access to their information resources.

From the Library Bill of Rights:

# 1-4 mention avoiding censorship and providing a variety of information. I feel these definitely apply to my two book-related issues above.

#5: A person’s right to use a library should not be denied or abridged because of origin, age, background, or views.

#6:  Libraries which make exhibit spaces and meeting rooms available to the public they serve should make such facilities available on an equitable basis, regardless of the beliefs or affiliations of individuals or groups requesting their use.

From the Interpretation of the Library Bill of Rights for Meeting Rooms:

“If meeting rooms in libraries supported by public funds are made available to the general public for non-library sponsored events, the library may not exclude any group based on the subject matter to be discussed or based on the ideas that the group advocates.”

While school librarians don’t have to deal with renting room space to hate speech-using organizations, it is still an issue that relates to the freedom of information and unbiased service for our customers. Putting aside our opinions and personal values is something we have to do when providing a well-rounded collection that meets the needs of our population. Preventing information from coming into the library because you are afraid it will become a problem is self-censorship. You are censoring the information before it even makes it to the library community. We all probably know librarians that didn’t purchase Harry Potter because they didn’t think witches and wizards had any place in the school library.

In 2009, School Library Journal published an article titled “A Dirty Little Secret: Self Censorship.” In the article, Barry Lyga’s Boy Toy is mentioned. When he published the book in 2007 he figured there would be a major fuss over it since it deals with a 12-year-old boy who becomes sexually involved with his teacher. (NOTE: I’ve read the book and I love it. It is well-written and extremely captivating.) Barry was surprised when he never heard anything about the book. Even though Boy Toy received rave reviews from major publications and was chosen as Best YA Fiction by kid-lit bloggers for a Cybil Award, there was absolutely no news from schools and libraries. Come to find out, public libraries were putting the book in the adult section and school librarians were refusing to order it because they were afraid of the repercussions. By the school librarians choosing not to buy it and public librarians shelving it in the adult section, they were gatekeeping.

The chair of the book selection committee I’m on at work was gatekeeping by not adding Mein Kampf to our list, and the secondary librarians that decided they weren’t going to purchase Cannabis: The Illegalization of Weed in America by Box Brown, Period Power: A Manifesto for the Menstrual Movement by Nadya Okamoto, Sex Plus: Learning, Loving, and Enjoying Your Body by Laci Green, and Ready for It by Chusita Fashion Fever before even reading reviews and looking at the books themselves were definitely gatekeeping. We don’t allow parents or principals to come into the school library and remove a book from the collection without following a policy for reconsideration. Along those same lines, school librarians should follow the policies for collection development. If the book meets the criteria, there is no reason it shouldn’t be added to the school library.

I’ll admit, I’m of the mindset that people should read what they want, watch what they want, and do what they want as long as it’s legal and doesn’t hurt or bother those around them. I didn’t have my values challenged when I was still purchasing books for public school collections. Separating my opinions and values from the professional librarian duties wasn’t hard for me. I know that isn’t the case for everyone. However, if you made the decision to become a librarian you should follow the professional ethics of the field. If that’s too difficult for you to do then maybe it’s time for a career change.

Since we lost Stan Lee this month I think it’s fitting that I use this quote: “With great power comes great responsibility.” The quote first appeared in Amazing Fantasy (1962) #15 and features Spiderman on the cover. School librarians have great power. They are the ones choosing the materials for the school library. With that power, they have a responsibility to the school community to provide the best, most unbiased resources as possible. To do that they often have to go against their own views and values.

No one ever said being a librarian was easy.

Associate Professor of Library Science at Sam Houston State University in Huntsville, TX. The author of SCI FI ON THE FLY: A READER’S GUIDE TO SCIENCE FICTION FOR YOUNG ADULTS and SKETCHNOTING IN SCHOOL. She spends her time reading children’s, young adult, graphic novels, and adult romance. She commutes between Oklahoma and Texas every week and listens to a lot of audio books. In addition to reading, Karin doodles and sketchnotes using mostly the iPad Pro and Apple Pencil. She’s been married for 23 years and lives on 29 acres with her husband, Longhorn cattle, three stray tomcats, and one spunky Chihuahua named Pennie.