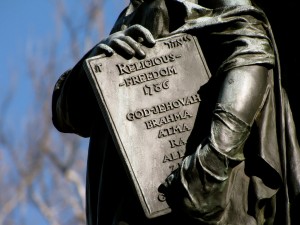 Educators  face perplexing issues of religious diversity all year, but especially in December.

Thomas Jefferson considered his Virginia Statute for Religious Freedom one of his most important accomplishments. It declared that humans have the right to think for themselves and be free of government interference in matters of faith. In addition, it laid the groundwork for the First Amendment. The First Amendment states that “Congress shall make no law respecting an establishment of religion, or prohibiting the free exercise thereof. . . .” Religious liberty extends to children, as does intellectual freedom. Therefore, public school educators must exercise care with holiday practices. As the face of institutional authority, we must prevent personal beliefs from intruding on the rights of others. The people of the United States are increasingly diverse:

What practices celebrate diversity? How can we nurture all children?

Teach about holidays, but do not celebrate them.

Be inclusive, balanced, and objective.

As librarians, we are already committed to the First Amendment’s guarantee of freedom of thought. During this holiday season, let’s broaden our commitment to include respect for religious diversity. We can demonstrate that commitment by creating library spaces and programming to make children of all faiths feel at home.

Like Loading...
‹ Moving from Old School to New: How Making Connections has Changed the Library
Action Needed for School Libraries! ›