A Fine Catch: Lobsters @ the Library

THE PLANNING APPROACH
When I (jmf) was in a teacher preparation program and in library school, I planned my lessons around the best-of-the-best books. The books were the central feature of my lessons, and this approach helped my knowledge of book titles and authors grow. Through the years, however, I realized that this approach didn’t always hook reluctant readers. Sometimes the best books just weren’t enough to engage students or to convince them to love the library. What students wanted was action, especially when the library was a fixed, special area class.

So, my lesson-planning approach changed…drastically. I began constructing lessons by first thinking about inquiry activities that fostered young people’s development as global citizens. Only when I had the hands-on activity figured out would I start thinking about the literature to support it. Now I rarely go out in the world looking for outstanding books from which to teach. In this era, we have an abundance of those. What I spend my time looking for and thinking about are ways to hook reluctant readers on the action in the library…hands-on-activities that could be transferred into my library setting.

THE INSPIRATION
Acadia National Park (ANP) is a national treasure, preserving and protecting ancient Mount Desert Island, and other smaller 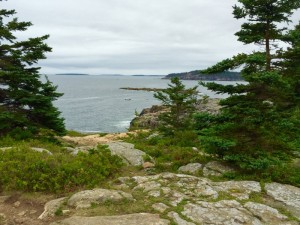 islands, off the coast of Maine. It is the oldest National Park east of the Mississippi River, established in 1919. History records show inhabitants in the area for well over 400 years,.  Residents there live in a unique landscape where wildlife, rocky shoreline, and lush conifer forest meet in and cover the many rocky islands that rest in the bountiful ocean. 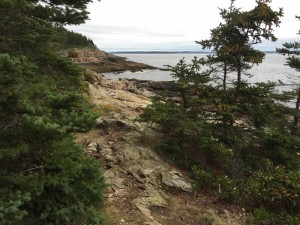 Today, modern communities near Acadia serve as resort and vacation destinations for travelers, offering opportunities for the locals that supplement the primary and traditional way of life that used to exist in these remote coastal locations before the National Park was established.  Families and communities for generations there before the national park were traditionally sustained by “lobstering” or harvesting the bountiful, red crustaceans from the ocean that thrive in the region.  The Acadia region, like any and every ecosystem or enterprise, exists in a state of interdependence on the balance, choices and stewardship of those involved and affected. While visiting ANP this Fall, we saw many examples of residents, visitors, and systems acting in ways that take good care of the sun- and water-splashed island jewels, but none more noteworthy than the code of conduct observed by those families and individuals involved in the lobstering trade.

PRINCIPLED, GLOBAL CITIZENS IN ACTION
In order to preserve the future lobster seasons for the individuals and families whose way of life depends on it, and also to help promote and maintain a healthy ocean ecosystem, the folks on the lobster boats take good care when they pull up their traps from the ocean bottom on which they reside. They consider (1) size and also (2) sex.

(1) Size
They are sure to free a lobster from the trap that is “small” and return it to the ocean, because removing lobsters before they have reached reproductive age threatens the survival of the species in the region and also the way of life for families in the lobster business. They also return lobsters that are very large, despite the lure of the big payoff they would bring, because the largest are the most successful at life in a harsh ocean environment and serve to populate the gene pool with the strongest and healthiest lobsters for future seasons.

(2) Sex
People in the lobster business also examine a lobster in their trap to see whether it is a female with eggs. If a female is carrying eggs in her underside, the lobster is also returned to the ocean so that the eggs might hatch and more lobsters will be born. The egg-bearing female is also marked on the tail section, so she is more readily identified in the next lobster trap she may wind up in, so that she can be quickly identified and returned without examination and risk to the eggs.

This cooperative stewardship we found in the community of “lobsterers,” doing the right thing for the benefit if all, especially when no one is looking, was inspirational to us when we visited.  It is a stirring example of how people there take good care of each other, especially those whom they do not know and have never met, while preserving and not destroying the beautiful ecosystem that binds them together in common life pursuits.

THE ACTIVITY
Learning about people who work in the lobster business inspired us to consider how a school or public librarian might help children practice and reinforce the lobster workers’ professional ethic. Why not fill the library full of every stuffed, plastic, and paper lobster that can be collected (from the entire school or library community)? After children find lobsters in the library and collect them in their “nets,” share with them the ethic of lobster workers. Then equip preschool and primary aged children with a paper or plastic measuring tool like the lobster workers carry (see double-sided gauge figure 1).

Using it, students can determine whether the lobster should be kept in their nets or returned to the ocean (also known as the library) by measuring.

Before the sorting is done, children can report their findings using a visual representation. On one side of the paper, children can draw a number of the lobsters that can be kept in their nets. On the other side of the paper, children can draw the lobsters that will be returned to the ocean. Then the children can share their findings with the class using a document camera. While some teachers and librarians claim that inquiry can’t be done with early elementary children, this activity meets one of the International Baccalaureate strands of inquiry: collecting data and reporting findings. Afterwards, invite the children to reflect on the activity and the way that people in the lobster business conduct themselves as principled citizens. Perhaps it leads the children to action: writing letters to people in the lobster business, or hanging signs at docks about the agreed upon regulations. Maybe the children will even go out on boats with their families to observe the lobster workers in action. As librarians, we want to celebrate and promote these acts that are brought about by our teaching.

BUT THE READING!!! WHERE DOES THE READING COME IN?
This week I’m (jmf) browsing A to Zoo and some lists on Goodreads to find a few excellent lobster picture books. If I’m lucky, my local public library will have a few of them in an eFormat. I haven’t decided if I’ll start the lesson with a read-aloud or end the lesson with it. Perhaps I’ll create a lobster unit plan and do both. But most importantly, I know the inquiry component of the lesson is solid. Students will be engaged not only with the activity, but with the practice of being a principled, global citizen. Sometimes it’s not the books… it’s ordinary people that inspire us in extraordinary ways.