Based on the new books I’ve read this year, I have to say that 2019 is an exceptionally good year for young adult fiction. In my last blog post, I talked about one of the amazing books I’ve read recently, The Fountains of Silence by Ruta Sepetys. Here are five more fantastic titles I’ve read and recommend for high school libraries. 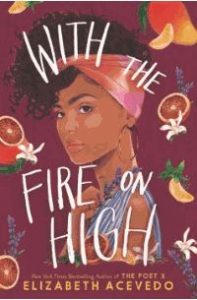 With the Fire on High by Elizabeth Acevedo, published by HarperTeen.

Elizabeth Acevedo uses rich language, universal themes, and diverse characters to create a coming-of-age story that teens will remember long after they read the last page.

With the Fire on High is the beautifully told, compelling story of Emoni Santiago, a half African-Puerto Rican, half African-American high school senior. A cook with almost magical powers in the kitchen, Emoni is also the mother of two-year-old Emma, whom she affectionately calls “Babygirl.” With help from Abuela, the paternal grandmother who raised her, Emoni is able to juggle teen motherhood, going to school all day, and working a part-time job after school. (It’s not easy, though.)

Emoni dreams of being a professional chef but knows she should head straight into the workforce after high school graduation to help support her family. Nevertheless, when her high school offers a new culinary arts class taught by a professional chef, Emoni enrolls. The highlight of the course will be a week-long trip to Spain to work with professional chefs there, but will Emoni be able to go? And if she does, how will it impact her post-high school plans? Moreover, how will Malachi, the sweet and handsome new boy in her class, affect Emoni’s plans? Emoni is not interested because she knows she doesn’t need the distraction of a boyfriend, but Malachi is persistent.

Featuring vivid language and memorable characters, this exceptional novel explores themes of family, heritage, friendship, courage, and perseverance. It’s an engaging coming-of-age story that will appeal to a wide range of readers. 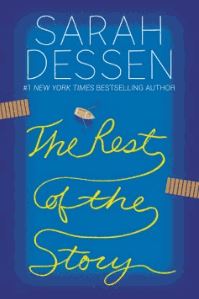 e Rest of the Story by Sarah Dessen, published by Balzar + Bray.

Sarah Dessen never disappoints, so it’s not a surprise that her newest novel is a charming story of family and romance that teens will savor.

Emma Saylor Payne’s parents met in the North Carolina resort town of North Lake when they were in their late teens. Her dad’s family was among the well-to-do tourists, and her mom’s family was part of the town’s working-class residents. They divorced when Emma was very young, and she has been raised by her protective father. Emma’s mother, who struggled with substance abuse for years, died of a drug overdose when Emma was twelve. Now seventeen, Emma spends part of the summer with her mother’s family, whom she hasn’t seen since she was four years old. Like her mother, Emma’s grandmother, aunts, and cousins call her “Saylor.”

At first, Emma’s cousins mistake her anxiety and shyness for snobbery, but once Emma starts helping out at their grandmother’s motel and slowly feels more comfortable around her relatives, real bonds of family and friendship begin to form. Emma hears stories about her mother’s early life and begins to understand the issues her mother struggled with. She also starts to fall for Roo, the son of her mother’s childhood friend. But when her father returns, Emma must figure out in which world she belongs.

Dessen creates likable and relatable characters as she tells an irresistible story that includes a dash of romance as it examines themes of family, identity, and social class. 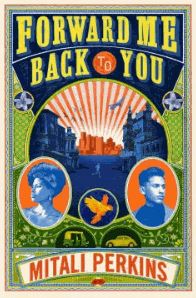 Forward Me Back to You by Mitali Perkins, published by Farrar Straus Giroux.

This authentic story of friendship, grief, resilience, identity, and courage revolves around two teens, two personal crises, and a trip to India.

When she is attacked by a white, wealthy, popular classmate at her private high school in Oakland, California, biracial scholarship student Kat King, a jiu-jitsu champion, is able to fight off her attacker, but she’s traumatized by the event. Because there were no witnesses to the attack, it becomes a he-said/she-said situation with nasty rumors spreading throughout the school. To help Kat heal emotionally, her mother sends her to Boston to stay with Grandma Vee, a family friend. Grandma Vee urges Kat to attend her church’s youth group.

One of the youth group members is Robin Thornton, who was born in India and adopted from an orphanage by wealthy, white parents. His parents are wonderful and supportive people, and Robin knows he is fortunate to have them. Yet, he’s never felt like he quite fits in anywhere. Now eighteen years old, Robin has some important decisions to make about his future.

Kat and Robin, along with their friend Gracie and youth group leader Pastor Gregory, travel to India to work with an organization that helps victims of human trafficking. While there, Kat hopes to teach jiu-jitsu to the rescued girls while Robin hopes to find his birth mother. During their nine weeks in Kolkata, the three teens meet new people, face challenges they didn’t expect, discover their strengths, and develop a stronger friendship. Along the way, they discover that courage isn’t necessarily a bold, daring gesture. Sometimes courage is moving forward and helping others after experiencing trauma or bitter disappointment.

This multi-layered story tackles difficult topics while maintaining a hopeful tone. Not only has Perkins created likable and authentic characters in Kat and Robin, she has also created equally memorable and realistic secondary characters (such as Grandma Vee and Gracie) who enhance the story. 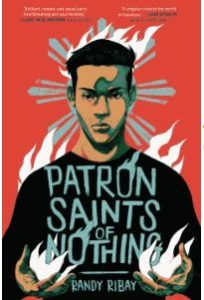 Patron Saints of Nothing by Randy Ribay, published by Kokila.

Recently shortlisted for the National Book Award for Young People’s Literature, Patron Saints of Nothing mixes mystery, family strife, and real-world drama as it explores themes of truth, justice, family, and identity.

Filipino-American Jay, a high school senior in Michigan, is unaware of the war on drugs in his native country until he receives the news that his cousin Jun is dead, killed by the police for dealing drugs. Even though he hasn’t been in contact with Jun for four years, Jay is certain his cousin was innocent. Telling his parents he wants to visit the extended family, Jay goes to the Philippines over spring break to find out what really happened to Jun, which won’t be easy. Unbeknownst to Jay, Jun had been estranged from his family in the years just prior to his death.

When Jay arrives in Manila, he clashes with his uncle (Jun’s father), who is the city’s chief of police. Jay believes the tactics used by the government in the war on drugs violates civil rights and can’t understand how his uncle can support it. The uncle views Jay as an outsider who cannot possibly understand life in the Philippines. As Jay investigates, he talks to other relatives (some of whom share his viewpoint on the drug war) and makes some surprising discoveries that make him wonder if one person can ever really know another.

Teen readers will relate to Jay as he learns painful truths about the complexities of human nature and the cruel injustices of life outside of his previously sheltered world. 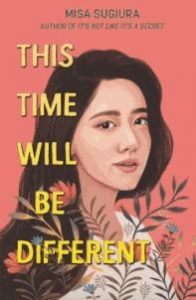 This Time Will Be Different by Misa Sugiura, published by HarperTeen.

A contentious mother-daughter relationship and the legacy of Japanese-American Internment Camps create a challenging situation for a teen trying to find her passion in life.

Seventeen-year-old CJ Katsuyama knows that parental expectations, family history, and relationships can be complicated. CJ has been raised by her ambitious mother, a successful corporate executive, and her easy going, slightly flaky aunt, Hannah. CJ’s dad has never been part of her life, and her mom won’t tell her anything about him. As if that doesn’t place enough of a strain on the mother-daughter relationship, CJ thinks her mother “feels personally attacked” by the fact that CJ doesn’t have “a killer attitude and a grand vision.” CJ enjoys working with Hannah at the family’s flower shop, Heart’s Desire, which was originally owned by CJ’s late grandparents before the Second World War. When they were forced into a Japanese-American internment camp, the Katsuyamas had no choice but to sell their shop for a fraction of what it was worth to Robert McAllister, who started his business empire by taking advantage of Japanese-Americans in the same situation as the Katsuyamas. After the war, the Katsuyamas tried to buy their business back, but Robert McAllister demanded the full market price. It took CJ’s grandparents twenty-eight years to save enough money to get their business back.

When CJ’s mom announces she’s selling Heart’s Desire (to her employer, McAllister Venture Capital), CJ and Hannah are determined to stop her. As CJ learns more about the history of her family and her community, she decides it’s wrong that her high school is named after Robert McAllister, so she starts a movement to have the school renamed. Now that CJ has found a cause she’s passionate about, will she tear her family apart?

Sugiura packs a lot into this captivating story. She skillfully explores how the Japanese-American internment camps affect one family and one community seventy-five years later as she touches on themes of identity, family, racism, sexism, and stereotyping. A subplot focusing on CJ’s love life (past and present) provides an additional layer of depth.  Add all of that to the realistic and relatable characters, and you have a book young adults will read and recommend to their friends.

These are just five of the great books for young adults that have been published this year. I know there are many, many more. What titles do you recommend?

Like Loading...
‹ Advocacy – Something for Everyone!
Calvert County Public Schools and The Ruth Toor Grant for Strong School Libraries for the WIN! ›