Flipping In the Library 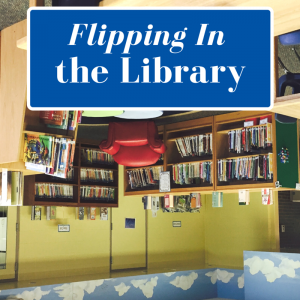 The flipped classroom model has gained popularity over the past several years. It has students watch a lesson at home and then apply it at school.  This method allows students to do the practice and hands-on experiences in the classroom rather than listen to a lecture. Most educators would not argue with the benefits of this model, however, the difficulty lies in the application (Educause, 2012).

As an early childhood educator, I have always struggled with how this method could be applied to the students at my level. Then I attended the Michigan Association of Computer Users in Learning (MACUL) Conference in March 2015. While at the conference, I attended a session by Mike Brown (@mikebrown145) called “Flipping the Classroom ‘in’ the Classroom.” This session highlighted how he was using flipping with his second-grade class.

Brown had taken his spelling and handwriting curriculum and flipped them. He had taken two parts of his curriculum that were difficult to fit into the school day and were fairly straightforward to explain and created a video to teach the concepts. Then while he was working with small groups or other students, he had students watch the videos. Additionally, to have students access the videos independently he used a QR code. The QR code was then placed in the classroom as an easy reference. This way if a student had forgotten the spelling pattern or how to form the letters they could just watch the video again.

As I listened to him share, all I kept thinking was I could totally use this. It was genius! He was able to teach two things at once. Additionally, he had made it easy for his students to gain access to the information if they needed it again. All I could think was why did I not think of it! I immediately wanted the teachers that I work with to be using this method, but I also knew that I needed to try it on my own first.

If I am being completely honest, it did not work the first time I tried it! In my first attempt, I sort of just jumped in and it was a huge failure…like colossal failure! I quickly figured out that in order to make this successful I had to have students practice what I wanted them to do before I actually needed to work with small groups.   So this year, I changed it up a bit.  I took a few lessons that I normally taught as an entire group and instead flipped them. This allowed me to meet all my curriculum standards, while preparing my students to work independently when I really needed them to.

I decided to try it this year with first grade. In this grade level, the students complete a research project related to countries around the world. In an effort to keep it as project-based as possible students choose a topic related to continents they are studying in their classroom, but it can truly be anything that connects to this subject area. It is very open-ended and leads to a wide range of topics. This year, I had a student studying polar bears, one the Transatlantic Mountains in Antarctica, another the Great Barrier Reef, and another Ferraris all in the same class. Now something to remember is that some first-graders are excellent readers, but many are not, so I have to work individually or in small groups to help students with this project. To make a long story short, I had to have a plan for the students who were not working with me in order for this project to have a chance at being useful to student learning.

I have access to iPads in my school and each is loaded with with certain apps. One of those apps is Educreations, which I decided would be the easiest way to begin. I created a series of five different lessons. Basically, we did one a week with a few lasting two weeks based on the number of students who were able to complete them in a single class period. The lessons related to aspects of the library curriculum that were relatively simple, but important to student understanding. Examples included using the catalog, the difference between fiction and nonfiction books, alphabetical order, and dictionary skills. At the end of each lesson students were asked to complete a short task that I could use as a sort of assessment. This allowed me to see who I needed to provide more instruction to related to each topic.

It was beautiful! All the students were engaged in meaningful work even if they were not working with me directly. I no longer was giving students the busy work I used in the past. By “flipping in” I had basically cloned myself. I was able to teach twice as much in the same amount of time, without overwhelming my students. I learned that I needed to make sure I modeled and students practiced what this should look and sound like before working in small groups. I also found that it was better to start small and keep it simple. I will probably not be winning an Oscar for my video performances, but that does not really matter. Instead it is about explicit and thoughtful instruction. In the end, it has been a brilliantly borrowed idea and one that I hope others will try!