There are a plethora of great manga titles being licensed nowadays, and keeping track can sometimes be daunting. Here are four recent and upcoming titles you won’t want to miss! 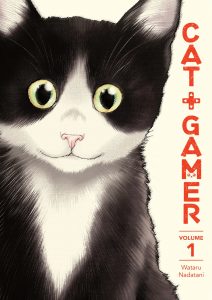 When an office lady who is secretly a hardcore gamer brings home a stray cat, adorable hijinks ensue!

What makes Cat + Gamer such an appealing title is the blend of cat and gamer content. Students who love animal manga will delight in Nadatani’s illustrations of Musubi, while gamers will be impressed by the thorough knowledge of video games. The story is fairly simple, as the main character, Riko, learns how to raise a cat while enjoying her games. Part of the fun is how Riko tends to think in gamer terms about everything, including Musubi. It’s an utterly delightful romp that’s bound to be a hit! 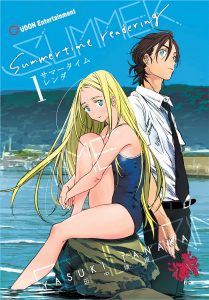 Shinpei returns home for the funeral of his childhood friend but finds himself caught in a time loop that has consequences for the entire world.

The manga that inspired Disney+’s new anime, Summertime Rendering is a haunting time loop manga with elements of horror. This manga is a perfect bridge for fans of series such Erased, Parasyte, or Tokyo Revengers. The series deftly handles horror and thriller tones, while also balancing the melancholy of loss. Shinpei’s struggle to understand what truly happened to Ushio and what is happening to his home makes for a gripping tale. The collecting of this series into omnibus hardcover editions also means longevity on library shelves! 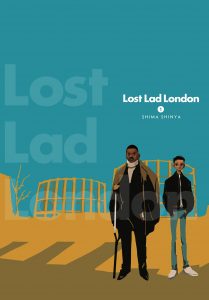 Al Adley has no idea how the bloody knife got in his pocket after he took the London Underground home at the same time the mayor of London was fatally stabbed in a train car, but he’s found an unlikely ally in Detective Ellis, who believes his innocence.

Both Japan and Great Britain have a long history and reverence for the mystery genre, and this gorgeously illustrated series brings to the forefront that interplay. There’s a great deal of tension in this series, and the mystery is gripping. Setting the story in London means we get protagonists normally not seen in manga: Al is South Asian, while Ellis is Black. And Shinya writes with a lot of understanding of the culture and feel of the setting, making this a truly unique manga. The enthralling mystery and fascinating characters are sure to grab students’ interests. 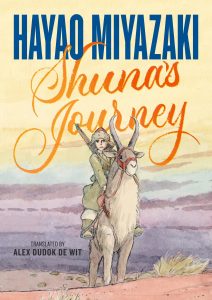 Shuna, a prince of a famine-stricken land, sets out to find the golden grain to potentially help his people.

This story was originally published in Japan in 1983, and in it, you can see the roots of all of Miyazaki’s work at Studio Ghibli. Miyazaki originally wanted Shuna’s Journey to be a film but was told that such a simple story wasn’t suitable for animation. Instead, he was supported by several Japanese publishers to make this manga.

Shuna’s Journey is gorgeous, with lush watercolor illustrations and a story about strength, hope, and love. It is ultimately a simple story about a boy, on a journey to help his people, who meets a girl whose own strength winds up being his real salvation. Shuna’s Journey will be published as a single hardcover volume, and it’s a book you’ll want on your shelves.

Like Loading...
‹ Use your Voice! We Need Accurate Narratives of the School Library
Digitally Fluent in New York City ›