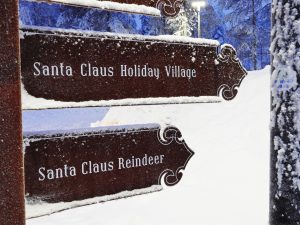 Visit Santa’s workshop in Rovaniemi, Finland by viewing this 360-degree image from 360cities.net.

If you could go anywhere in the world, where would it be? A trip to the pristine beaches of Hawaii sounds nice. The view of Machu Picchu from the top of Huayna Picchu mountain is breathtaking. Perhaps you long to revisit the place where you grew up. As a child, I wanted to visit the North Pole. I yearned to watch Santa’s elves build toys and reindeer pull sleighs around the workshop. You may think these places are unrealistic destinations for you and your students. Think again. With online geography (geo) tools, students can explore the most extreme points of Earth and everything in between, including Santa’s workshop.

AASL’s Standards Framework for Learners encourages students to display curiosity and initiative by formulating questions about a personal interest or a curricular topic. Geographic awareness gives students the opportunity to explore subject matter at a deeper level. Luckily, there are open-sourced programs for enhancing geography education. Take Google, for instance. The technology company offers a plethora of free geo tools for engaging students in the process of asking questions that derive from curiosities and observations. 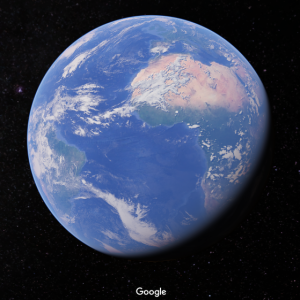 Google Earth enables users to explore the globe with a swipe of a finger. Fly through cities like London, Tokyo, and Rome. Google Earth is a free mobile application and web program for all sorts of information on Earth. It uses satellite imagery to grab, spin, pan, tilt, and zoom down to any place on Earth. These features spark students’ curiosities about the world—its geographic features and inhabitants. Students can use Google Earth to develop an understanding and appreciation for geography, history, and current events. By understanding Earth’s terrain, cities, monuments, and landmarks, students will make connections between our planet and its citizens.

Go Beyond Longitude and Latitude Coordinates 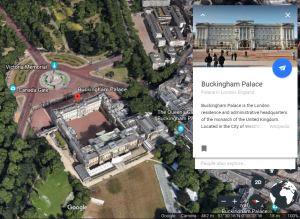 With Google Earth students can easily search and view specific locations in two and three dimensions. But there’s so much more. For instance, randomly fly to over 20,000 different locations using Google Earth’s “I’m Feeling Lucky” tool. Once at the location, students can conduct research by reading the informational card or performing keyword searches using online databases. For one activity, my students rolled the “I’m Feeling Luck” die three times to note similarities and differences that exist among places. At each destination, students identified the name of the country or landmark and recorded observations about the landscape and architecture.

One group of students found themselves at Buckingham Palace in London. While there, students used Google Earth’s Measurement tool to measure the distance in feet between the palace and Westminster Cathedral. Next, students calculated the perimeter of Buckingham Palace’s grandiose walls by dragging the cursor to each corner. Google Earth’s Pegman let students enter a panoramic view of the palace’s gate. There are countless possibilities when students explore the world using Google Earth. This revolutionary geo tool takes students’ learning beyond the traditional 2D map. 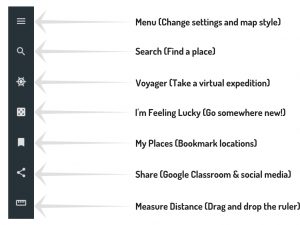 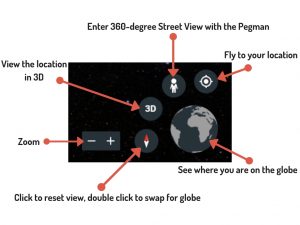 The 360-degree panoramic images in Google Earth are made possible by Google’s Street View feature. Google Street View is a mobile app and website where you can view panoramic images from a multitude of locations on Earth. With Google Street View, students can explore world landmarks, discover natural wonders, and step inside museums, arenas, and parks. After studying Arabic customs and traditions in social studies class, my students experienced what they had learned by viewing 360-degree photographs of mosques and ancient forts. 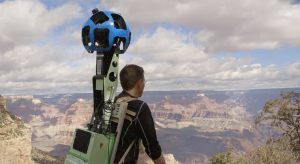 It is not only the Google Car anymore that is going around the world taking 360-degree images. Ordinary citizens are publishing panoramas to Street View as well. You can take 360-degree images from your phone’s camera inside the Street View app or with a 360 spherical camera like the Ricoh Theta. Google Treks fastens street view cameras onto the backpacks of hiking enthusiasts. The Treks initiative lets students go “off road” by viewing panoramas from mountain tops, plunging cliffs, tropical coastlines, and exotic wildernesses.

Embark on a Google Voyage

Google Voyager is another wonderful tool for connecting students with the world. Voyager brings visualization and geospatial storytelling to the forefront in Google Earth. Voyages range from the migration of red crabs to global sports venues where extraordinary individuals achieved incredible feats. Each “stop” on a voyage gives students a 3D or 360-degree street view of the location, informational text, and an image or video. By the end of the voyage, students will have traveled hundreds or thousands of miles and viewed the world from a totally new perspective. My students completed a Google Earth Voyager Quest for the work of National Geographic photographer Joel Sartore, who is attempting to document every species living in the world’s zoos and wildlife sanctuaries. Students “flew” from one destination to the next where they learned about different animal species and their habitats. For each location of the voyage, students responded to scavenger hunt questions I had entered into a Google Form.

Create Your Own World Tour

With geo tools, students do not solely consume content; they can create it. Google Tour Builder is a web-based storytelling tool that enables users to create stories about places around the world. According to the AASL Standards Framework for Learners, students are expected to make meaning for oneself and others by collecting, organizing, and sharing resources of personal relevance. Tour Builder lets students share resources by uploading personal or public domain images or videos alongside each destination of the tour. This tool is a great option for the culminating activity of elementary students’ country research projects. Easily share students’ tours by copying the URL to social media and the library’s website.

With geo tools students can experience new destinations without ever boarding a plane or sitting on a bus. The journey is what will resonates the most with students. During the journey students ask question, record observations, measure distances, conduct research, and experience Earth for what may seem, first-hand. American author Henry Miller once said, “One’s destination is never a place but rather a new way of looking at things.” Through the use of geo tools, students will develop an appreciation for the environment and all its inhabitants who make Earth a planet rich in diversity.

Sam Northern is a National Board Certified Teacher-Librarian at Simpson Elementary School in Franklin, Kentucky. He currently serves as President of the Kentucky Association of School Librarians. In 2014, Sam was selected for the Fulbright-Hays Summer Seminars Abroad Program where he spent four weeks in China. Since then, Sam has voyaged to Antarctica as a National Geographic Grosvenor Teacher Fellow and worked aboard a research vessel on the Atlantic Ocean as a NOAA Teacher at Sea. From January to April 2018, Sam traveled to Finland as part of the Fulbright Distinguished Awards in Teaching Program to research best practices for project-based learning. Connect with him on Twitter @Sam_Northern and Facebook @themisterlibrarian.