Home › Blog Topics › Advocacy/Leadership › Get Your Self(ie) Out There: My Year as an AASL Social Media Superstar

Get Your Self(ie) Out There: My Year as an AASL Social Media Superstar

Five years ago, I stepped into the role of school librarian at the same school where I had taught for fourteen years. I had been steadily reading blogs, such as Tiffany Whitehead’s Mighty Little Librarian blog, and gathering ideas to make huge changes in our school library, including making our library the heart of the school.

In the words of Miley Cyrus, I came in like a wrecking ball. I ripped out old rows of bulky computer stations, had a new circulation desk designed, furiously wrote grants to upgrade our technology, developed a plan for improving our “very white” collection, and completely changed the aesthetics by adding flexible seating, reading nooks, and bright colors. I also started a STEAM program, two Girls Who Code clubs, and introduced makerspaces to our students and teachers. There’s probably not a single thing I didn’t change, including opening the library before school and at recess, implementing flex scheduling, introducing collaborative teacher lessons and Skype visits and more. I was so proud of my hard work and the direction the school library was taking. I wanted everyone in our community to see what a powerful school library looked like, but how?

Then I thought to myself, “What better way than social media?” It’s free and easy to use, and everyone seems to have some form of social media account. I requested permission from the administration and designed our school library’s Facebook account because I knew the majority of the parents in our community were avid Facebook users. I thought about my school’s stakeholders–students, parents, administrators, community members, district personnel–and decided I needed to utilize multiple social media platforms. I created an Instagram account because that is what our students were using. Soon after that, I created a Twitter account because I realized that our district personnel had a huge Twitter presence, and I learned about building PLNs on Twitter.

I began small and posted once or twice a week. I would post book suggestions and the lessons students were learning in the library. Soon I began posting almost daily. Because our school has parents sign media releases, I can post pictures of our students and showcase what they are doing on a weekly basis. Parents were amazed at what their kids were doing in the school library. Even something as simple as self-checkout impressed them. Little by little, I started gaining followers as parents began tagging each other and sharing my posts until I gained quite a few followers.

My fellow librarian Laura Foy read about AASL’s Social Media Superstar Awards and mentioned she wanted to nominate me. I’m from a very small unincorporated town with two red lights; I told her there was no way I’d even be considered for something on a national level, but she changed my mind and she nominated me. Imagine my complete shock when I was named as a finalist, on the same list as some of my favorite school librarian idols. Becoming a finalist really made me want to bring my A game, so I started using apps such as Canva, Boomerang, and Texting Story to add a little pizzazz to my posts. Still, I thought there was absolutely no way I’d ever win. I was proven wrong when I was announced as the AASL Social Media Superstar Program Pioneer in April 2019. 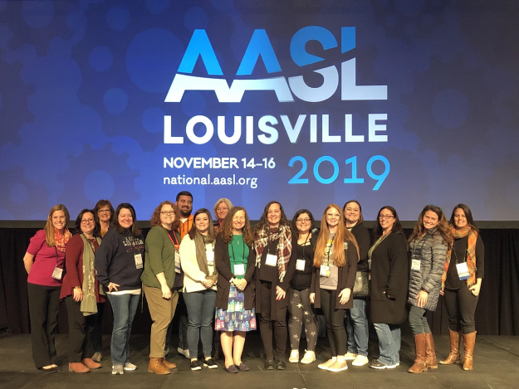 My year as an AASL Social Media Superstar was like a dream come true. Winning this award gave me the confidence to present on using social media in school libraries at the ISTE Librarians Playground in Philadelphia, something I never would have had the courage to do before the award. During my presentation at ISTE, I met many of the librarians I follow on Twitter, improving my PLN and networking with librarians across the nation. It was at ISTE that I met Amy Hermon of the School Librarians United podcast. I’ve been on her podcast twice and count her as a friend—one I’d never have if not for the snowball effect of winning this award. Learning about her podcast has exponentially improved my school library and made me a better school librarian. I also had the courage to volunteer for the AASL19 Social Media Squad and presented three sessions at the AASL National Conference this past November in Kentucky, one of which was titled “Put Your Self(ie) Out There:  Using Social Media to Showcase Your School Library.”

Over the past year, I improved my social media skills and have used my platform to advocate for school libraries, gaining not only district recognition, but also state-wide recognition. I’ve been able to advocate for school libraries and showcase the power of a well-rounded school library. My library social media accounts are now well-known in my community and state, and I have been able to use them to share the power of graphic novels and the importance of #ownvoices and diverse books. I also shared research by Dr. Stephen Krashen from his book The Power of Reading: Insights from the Research, a blog post by Donalyn Miller titled “I’ve Got Research. Yes, I Do. I’ve Got Research, How About You?,” and Pernille Ripp’s article “The Leveled Library: When Is It Time to Remove the Scaffold?” to change the mind of a community that once thought that forcing levels and reading zones was best practice.

By using social media, I’ve also learned the power of using Twitter to build a professional learning network. I’ve learned about literacy shaming from @DrTLovesBooks, social justice from @erikaslong, the importance of advocacy from @Boss_Librarian, tips on ed tech from @NikkiDRobertson, LBGTQA+ inclusivity from @MrsBoudreau and @NancyJoLambert, and so much from @Hildakw and @jenniferlagarde that I don’t know how I will ever repay them. I am empowered to ask questions about important topics from knowledgeable librarians across the world, which is important when I am the only librarian in my school and can sometimes feel alone in my professional journey.

Social media can be a great way to connect with your community. Many of my students’ parents, as well as prominent community members, follow my school library on Facebook. Not only is it a great way to advocate, but it also creates partnerships and funding sources. Every time I post a Donors Choose project, it is funded within hours. When I post that I need supplies such as Legos, toilet paper tubes, art supplies, or other items, I receive those items by bulk the next day. Social media is a win-win way to simultaneously build trust, get help, and showcase the power of school libraries.

I recently found out I was named the 2020 School Librarian of the Year for the state of Louisiana, something I believe I owe in part to the confidence and professional growth I’ve gained this past year as the AASL Social Media Superstar Program Pioneer. I am beyond grateful to AASL and hope that more librarians than ever will apply for grants and awards that could change their professional live.s My advice to school librarians across the nation is to nominate themselves, even if they, like me, think they have no shot. You never know what you can achieve in life if you don’t put your self(ie) out there.

Amanda is the 2021 School Library Journal Co-Librarian of the Year, the 2020 Louisiana School Librarian of the Year and a 20 year educator from Watson, LA. She’s a teacher-librarian and reading specialist at a 5-6 grade middle school. She co-hosts the My Two Cents edtech webinar series and is the 2019 AASL Social Media Superstar Program Pioneer. Amanda is an active member of several committees for both AASL and the Louisiana Association of School Librarians. She loves connecting students with “homerun” books and loves networking with librarians from around the world. Visit her library website at lomlibrary.org and/or find out more about her at http://librarianjones.com/.