The Generation Gap or How iGen Are You? 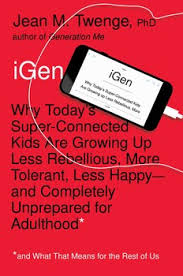 At 58, I joke with people that I love being a middle school librarian because I’m still so in touch with my adolescent self. As a late Boomer, the mother of late Millennials, and a teacher of teens since 1985, I thought I understood Teen World. In the last three or four years I’ve begun to notice some rapid changes. Then I ran across Jean M. Twenge’s illuminating book, iGen. I scored only 3 of 15 on the How iGen Are You quiz. If you work with young people (iGen stands for children born in 1995 or later–25% of our population!), please read this book.

Values and How They Were Shaped

I asked my book club students, how old were you in 2007? Two, three were the answers. 2007 is the year the iPhone came out. They can’t remember a world without smartphones. That one device has shaped this generation in profound ways. According to the research Twenge presents, safety and individualism are what most define them. This generation has been more sheltered than any other. They have been taught to fear independence or what they refer to as “adulting.” They spend less time hanging out with their peers in person and much more time communicating via smartphone screens. In addition, there’s a direct correlation between the amount of screen time and depression. These kids take much fewer risks than teens of previous generations, and they get along much better with their parents because they are less likely to rebel. They’re less likely to drive at sixteen, experiment with drinking, or even to take on after-school or summer jobs. Because they value individualism, they are less judgmental, less conformist, more tolerant, more gender fluid, and more accepting of different lifestyle choices and habits than the generations of teens that came before them. 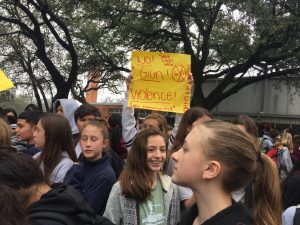 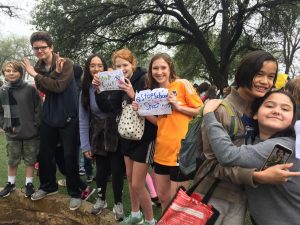 Why Are These Kids Galvanized by Parkland Shooting Than the Teens after Columbine?

The obvious difference is the savvy use and rapid spread of social media and organizing, apps and technology not available to teens after the Columbine shooting in 1999. On Friday, February 24, about 300 of my middle school students walked out during lunch to rally for gun reform. This most protected generation is motivated by empathy with the teens in Parkland because they value safety above all else. They want the government to ensure their safety. But don’t mistake these iGen kids for new Democrats. Although they align with Democrats on the issue of gun reform, they are more Libertarian in nature, sharing a cynical distrust for both traditional Democratic and Republican politicians, thus their attraction to non-traditional party candidates, both Bernie Sanders and Donald Trump.

What about iGen and Books? 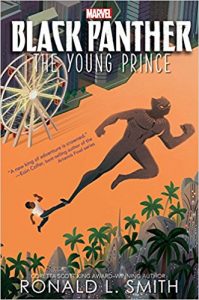 The data is not encouraging. In a section of iGen, “Are Books Dead?” Twenge provides a devastating downward graph. Almost 30% of 12th graders reported that they did not read any books for pleasure in the last year (2014). Kids are spending more and more of their leisure time on social media, gaming, and YouTube. Still, at least at the middle school level, we can reach them. One success is tying movie releases to the books they’re based on, pitching books as entertainment rather than academics. In our library we have an ever-rotating display of books made into movies or soon to be, including The Hate U Give, Every Day, Everything, Everything, A Wrinkle in Time, and the latest: Ronald L. Smith’s Black Panther: The Young Prince. The new Marvel series, written by various YA authors and sponsored by Disney, is a great way to hook dormant readers. If we want to reach these kids, we must stay very current in updating our collections with the latest hot titles.

How Best to Support iGen

No matter what generation you sprang from, this one is different. Don’t assume they’re rebellious just because you were. Try to encourage them to spend more face-to-face time with their peers. Encourage them to talk to each other in group discussions during library instruction classes and in book clubs. Before school in the library, when I see them hunched over their phones, I remind them to put them away (school rule), but say, enthusiastically: “Talk to your peers! Look at all these wonderful people all around you!” I also warn them that too much screen time leads to depression. Because they are so safety focused, that warning resonates. Finally, there’s a lot of sadness, split families, and trauma these kids go home to. Love them.

Twenge, Jean M. IGen: why todays super-Connected kids are growing up less rebellious, more tolerant, less happy– and completely unprepared for adulthood (and what this means for the rest of us). Atria Books, 2017.

Jean Twenge Professor of Psychology, San Diego State University. “Why this generation of teens is more likely to care about gun violence.” The Conversation, 22 Feb. 2018, theconversation.com/why-this-generation-of-teens-is-more-likely-to-care-about-gun-violence-92145.