Home › Blog Topics › Intellectual Freedom and School Librarians: Looking Back and Looking Ahead

Intellectual Freedom and School Librarians: Looking Back and Looking Ahead 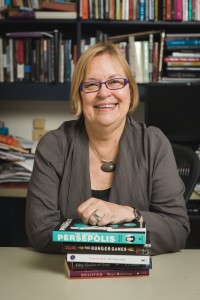 Beginning January 1, 2016, there will be a major change in the ALA Office for Intellectual Freedom (OIF) and the Freedom to Read Foundation (FTRF). On December 31, 2015, Barbara Jones, the OIF executive director, retired. She became the executive director of both OIF and FTRF following the death of her mentor Judith Krug in 2009. As an academic librarian, Barbara came to those positions with twenty-five years of experience in advocating for and protecting intellectual freedom. Additionally, she was well known internationally as a trainer and consultant having served as a member of the Freedom of Access to Information and Freedom of Expression Standing Committee (FAIFE) of the International Association of Library Associations (IFLA).

For six years, Barbara was the voice representing intellectual freedom for ALA and the library profession speaking out on issues relating to the First Amendment, protecting the freedom to read, library privacy, filtering, and more. Before she retired, I asked her to reflect on her time at ALA and to look ahead to intellectual freedom issues she sees coming for school. Her comments appear below in blue text.

Having never been a school librarian, when hired to lead OIF, Barbara took immediate action. She recounted her early days saying, “My top challenge was to get to know more about school libraries. I visited school libraries whenever I took a speaking trip. For example, when I was in Portland (Oregon), I visited three school libraries over the border in Washington State:  an elementary, a middle school, and a high school library. I was impressed with how much the 3 librarians collaborated and attended book review meetings together whenever a book was challenged in any of their libraries. I now understand how courageous school librarians are when they are the only person in a school district to stand up for a book. I remember having a conversation with some of the [Portland] students and asking them about privacy and what it meant to them. They were so eager to read, to learn, and to talk with me.” (Jones).

I asked Barbara what she considered OIF’s greatest accomplishments for school libraries during her tenure.  She replied, “While we don’t keep statistics about ‘wins’ or ‘losses,’ I do know that our successes far outweigh the losses. I remember Highland Park (Texas) High School’s fight to keep several books on the shelves. They [the HP Kids Read group] will receive the Downs Award [Robert B. Downs Intellectual Freedom Award] in Boston in January [2016]. They kept almost every book on the shelf in the face of powerful, moneyed opposition. I was so proud that OIF staff worked with them so intensively and that several students were honored at the Texas Library Association meeting, too.”

“I remember our support of the Lane Tech High School students in Chicago, standing in the icy rain with signs, ‘Honk if you love the First Amendment,’ over the removal of Persepolis from the curriculum.  It was reinstated. I was so pleased that we were able to work with so many students who understood that their rights were being infringed upon. I hope my successor will be able to take our work with students and increase it. It is indeed a ‘teachable moment’ when students discover their freedom to read is being violated” (Jones).

Although there are many challenges to intellectual freedom, Barbara focused on several that concern school libraries.

Barbara had one final request for school librarians. “I urge school librarians to consider becoming part of the intellectual freedom community. It is a thoughtful, committed community of great librarians. They will support each other during challenges, during the threat of school library closings, and in many other ways.  I have had school librarians tell me that they don’t want to get involved because OIF does such a good job on their behalf.  My response is that OIF is in an office building in Chicago. Some of us have never worked in a school library. We need the ‘boots on the ground’ to keep us real!!!!!  Our solutions will only be real if school librarians help us” (Jones).

Following in the footsteps of Judith Krug, Barbara Jones has carried the intellectual freedom banner for school libraries. As a former school librarian, I thank Barbara for her dedication to protecting students’ rights in school libraries and wish her well in retirement. Even though she will not be working at ALA, Barbara will continue her fight against censorship—a battle from which she will never retire.

Her successor, Jamie LaRue, was announced in early December. He is a long time intellectual freedom advocate and library professional from Colorado. Read about LaRue’s background on the December 9, 2015 OIF Blog.