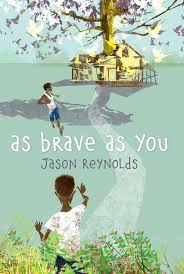 What is a storyteller? Most definitions fall along the lines of “a person who tells stories,” but that doesn’t begin to do Jason Reynolds justice. Jason writes relevant stories for young people. He writes for young adults, both high school students and middle school readers.

His titles include Ghost, The Boy in the Black Suit, As Brave As You, and When I Was the Greatest. Jason also writes collaboratively with others. He has also co-written All American Boys with Brendan Kiely, My Name Is Jason. Mine Too.: Our Story. Our Way. with Jason Griffin, and Surfing Margaret River: Cape to Cape Guide with Terri Sharpe.

More compelling novels are on the way this year. Miles Morales: Spider-Man (A Marvel YA Novel) will be released on August 1, followed by Patina, a sequel to Ghost, on August 29, and Long Way Down on October 17. Sunny, the third novel in the Track series along with Ghost and Patina, is scheduled for an April 2018 release. Another title you can look forward to seeing in April 2018 is Jump Anyway.

Come to Phoenix in November and hear Jason Reynolds present the Saturday general session at AASL’s 2017 National Conference and Exhibition, themed “Beyond the Horizon.” Jason has received numerous awards, including multiple Coretta Scott King Honors, a Kirkus Award, a Walter Dean Myers Award, and an NAACP Image Award. This past January he was the recipient of the Schneider Middle Grade award.

I’m excited to hear Jason speak. Telling a prospective reader something personal about the author can persuade them to give the book a chance. I hope to get several good ideas to use to get students hooked on Jason’s books and that is always a victory in my book.

Join me in Phoenix and let’s see what new horizons we find!