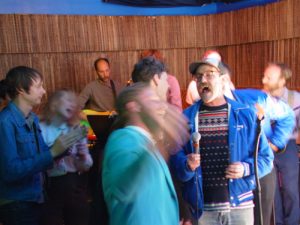 You could hit all of the right notes and still come to nothing in karaoke. On the other hand, you could hit around 20% of a melody and still bluster your way to solid gold. Sometimes it’s so bad, it’s good.

In order to encourage expressive culture and emphasize the library as a site for coproduction, we host a weekly performance series. Once a month, these intimate concerts are usurped by an all-out karaoke massacre.

Killing it onstage and killing a song aren’t necessarily mutually exclusive. It is up to the performer to escort the audience out of this valley, skirting death onstage and making a living connection.

To be honest, the students also wanted to do “Panda” by Desiigner, but didn’t get far before the song was shut down. I have my limits. Furthermore, words count in karaoke; songs are sung texts. People read along. People sing along. People follow along. People dance along.

Kate Pahl and Jennifer Rowsell emphasize artifactual literacies as ways to honor students’ out-of-school identities. In this way, a song is a strange opportunity, inviting one to fully be present as well as allowing one to transcend the ordinary through an extraordinary performance.

Likewise, it is hard to pin down a song. Although it may seem immaterial, a song is a great example of a multimodal artifact. It exists as sound and melody. It exists as visual text. It exists temporally and culturally in the shared situation between performer and audience. Whenever it is sung live it is reinvented and reshaped, bearing the contextual patina of its particular performer.

Songs sung together also invite community. Kids from multiple cliques come together to belt the words to Pokémon. Friends dance for friends to invite courage through fraught “Fireworks.” Murmurs of “Oh yeah, I know that one,” ripple through the crowd when a faculty member joins the fray with “Wooly Bully.” You can’t be rick-rolled when you fully expect and appreciate a performance of “Never Gonna Give You Up.” The bait never switches.

John Dewey begins Democracy and Education by emphasizing education as a process of communication:

There is more than a verbal tie between the words common, community, and communication. Men live in a community in virtue of the things which they have in common; and communication is the way in which they come to possess things in common…The communication which insures participation in a common understanding is one which secures similar emotional and intellectual dispositions—like ways of responding to expectations and requirements.

You don’t always need to hit the “right” notes for a successful performance.