Laughter in the Library

You might laugh, but the library of my dreams has a giant Robot Arcade. The other night I dreamt that a massive wall in my library began to lift and revealed a Robot Arcade behind floor-to-ceiling plexiglass walls.

[spoiler-alert: my library does not have a hidden Robot Arcade, but I will be sure to include one in next year’s budget proposal.]

Following the perfect randomness of dreams, Stuart Murdoch from Belle and Sebastian was touring the space and my inner fan-boy went berserk as I tried to process the confluence of robots and rock stars in my library. 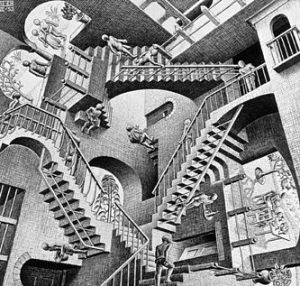 Indeed, this library had it all: secret passages, ornate stairways within stairways, even a miniature stairway that was a perfect mouse-sized duplicate of the stairway within the stairway; you could open the door with your fingers and peek through to the top.

There were also crowds of random people roaming around. I have written often about the odd hush of summer in a school library. Although I appreciate the time to plan, re-stock, and look ahead, I miss the students; especially their laughter.

Laughter is a peculiar beast in a library space. Although we want to encourage a mindful and welcoming space for people that want to focus and get work done, we should also be aware of the affordances of laughter as an act of communication—could there be such a thing as a literacy of laughter? 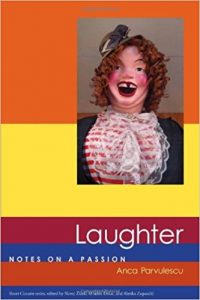 Anca Parvulescu’s book Laughter: Notes on a Passion interrogates the “materiality” of laughter by tracing its treatment in western culture through a wide variety of media. It is the perfect book for librarians; Parvulescu’s approach to research features wide, promiscuous readings of manifold texts.

She describes discipline against laughter, aka the “civilization of laughter,” in society by tracing philosophical arguments and etiquette-based invective:

Interestingly, echoes of this stricture resonate within the typical rules and boundaries employed by school libraries. Parvulescu traces the reclaiming of laughter as a liberating and subversive force. It also works in service of community:

To laugh is to enter the space of the sea and a fragile “compound being” (être composé), formed by isolated singularities that remain singular and yet, in laughter, become permeable to a common movement and communicate. (90)

In order to develop common spaces for young people that encourage communication, pique curiosity, sustain the joy of discovery, and promote burgeoning literate identities, we should seek to understand what’s going on when someone cracks up in the stacks. I highly recommend reading Anca Parvulescu’s book Laughter: Notes on a Passion if you are intent on pursuing the library of your dreams.