Home › Blog Topics › Libraries Are for Everyone

Libraries Are for Everyone 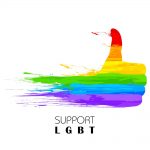 Yesterday my office (Library Services) partnered with the Wellness Program to present A Health Wellness Training for LGBTQ Youth. The speaker, Charles Wibbelsman MD, is an expert on LGBTQ youth and a long-time family friend. He recently retired as chairman of the Chiefs of Adolescent Medicine for the Permanente Medical Group of Northern California and as an Associate Professor of Pediatrics at the University of California, San Francisco Medical School. He served as the Director of Education for the American Academy of Pediatrics Section on LGBTQ Health & Wellness. He is also the co-author of the updated Teenage Body Book. As you can see he has impressive credentials.

The attendees came from neighboring districts, county government, counselors, administrators, nurses, faculty, and LGBTQ support groups. The district’s boardroom was so crowded that there was standing room only. Dr. Chuck opened the meeting by showing the last few minutes of the film Prayers for Bobby. This is a heart-wrenching true story of a Northern California LGBTQ teen who committed suicide by jumping off a freeway overpass. After a minute of silence, he launched into his informative and often frightening PowerPoint presentation.

So how does this tie into libraries and librarianship? School libraries can be safe havens for LGBTQ students. Libraries can also provide materials that reflect their realities and resonate with their situations. Shannon Oltmann’s paper “They Kind of Rely on the Library”: School Librarians Serving LGBT Students  (posted on the YALSA website) talks about the need for LGBTQ materials in the library. She also cites some discouraging studies that “…a lack of LGBTQ-themed literature can send a message to LGBTQ teens that the school library is not the place for them…”  However more concerning were her findings on self-censorship: “… (librarians) making collection management decisions on the basis of avoiding conflict.” One survey even reported that 70% of school librarians would not purchase controversial materials for fear of parent objections.

Even more disturbing is the misguided idea of identifying LGBTQ materials with pink superimposed rainbow labels for easy access. Unfortunately pink labels remind us of the Nazi-era pink triangles that homosexual prisoners were forced to wear. Labelling, identifying, or separate shelving of these materials may very well jeopardize the safety of our LGBTQ students. The ACLU has stated that LGBTQ students have a right to be protected and “it is against the law to disclose a student’s sexual orientation or gender identity even to a student’s parents or other school administrators.” When we add LGBTQ-themed materials to the collection, we should take this into consideration.

In December 2016, Human Rights Watch reported that LGBTQ students were regularly harassed in U.S. schools and often had problems accessing informative materials in the school library. As librarians, we can encourage inclusion and acceptance. Too often we make safe choices to avoid difficult situations, but we need to remember that these students are exactly the ones that need our help… are often the ones bullied at school or on social media… and they are often the ones who commit suicide. Together we can keep the silence surrounding gender identity from growing louder…together we can begin the conversation.