Light Novels: A Natural Extension of Your Manga Collection

A light novel (ライトノベル) is a type of young adult novel in Japan that targets middle and high school students. Light novels are an interesting format, often packaged with manga illustrations. They are published at a fast and steady pace. Oftentimes light novels are adapted into manga and anime. While they aren’t quite as popular in the United States as manga, they have a fervent and devoted audience.

My big selling point for light novels is often that they serve as a bridge text for manga readers to prose… but that’s honestly my attempt to appease picky teachers who still resist graphics. The honest truth is that I think light novels have their own independent value.

Light novels are written at a fast pace, with high drama and action. This is due to their serialized nature. Light novels in Japan are sometimes published monthly, or chapters are published like manga chapters in anthologies. Many popular manga and anime started as light novels: Sword Art Online, That Time I Got Reincarnated as a Slime, and the Haruhi Suzumiya series.

Right now, the biggest genre in light novels is isekai (異世界), a genre that revolves around the main character being transported from the modern world to some other world. However, not all light novels are isekai. The classic light novel series Full Metal Panic is a mecha adventure story, and high school romantic comedies such as Bottom-Tier Character Tomozaki are rooted in a realistic setting.

What’s really interesting about light novels is how easy they are to read. The pace is generally fast. The characters are often very compelling. A popular trope is for the protagonist to be reincarnated into the role of a villain of a video game or novel and have to avoid “doom flags” by changing the story or themselves. And throughout the story are illustrations, serving as additional treats for the reader.

For our students, part of the appeal is the depth they get into the story. Light novels are sometimes capable of deeper world building and introspection than manga or anime. Also, the light novels often are well past the point of the manga or anime, so it’s a faster way to get the full story.

But… Are They Appropriate?!

Here’s the thing with light novels. Sometimes, the cover is a little bit sexy, depending on the series. This is fan service and is not really reflective of the content. Oftentimes, the content is much more chaste than most of what you probably have in your general fiction section. That being said, just like with all things, use some common sense. The publishers do offer age ratings. And the titles of texts are often very specific when they are actually explicit. JK Haru Is a Sex Worker in Another World is not going to be a good selection for a school library. (That being said, this work is a deconstruction of the format and is a critique of misogyny in both Japanese culture and in the fantasy settings typical of light novels. I recommend it for adults.) There are reviews available, too.

Some Titles to Get You Started

The following are light novels that I know are available in print. Because of the target audience in Japan, these texts are middle school and up. 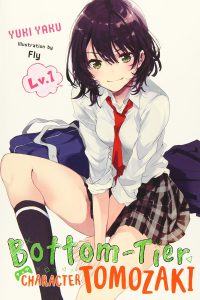 Bottom-Tier Character Tomozaki by Yuki Yaku, Illustrated by Fly. Published by Yen On.

Tomozaki is the top gamer in Japan, but there’s one game he doesn’t find worthwhile–the game of life. As far as he’s concerned, the stats are stacked against him! That is until a meeting with the number two gamer in Japan has him questioning everything. 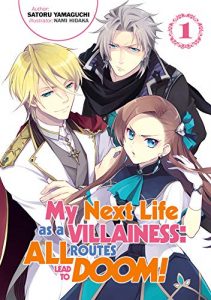 My Next Life as a Villainess: All Routes Lead to Doom! by Satoru Yamaguchi, Illustrated by Nami Hidaka. Published by J-Novel Club.

A bump on the head is all it takes for Katarina Claes to suddenly remember her past life as an otome game (dating sim)-loving girl who played a game called Fortune Lover…with a villainess named Katarina Claes who meets a number of nasty ends! It’s up to this plucky protagonist to avoid her doom flags in this high comedy story. 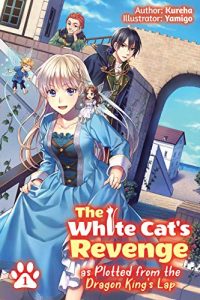 The White Cat’s Revenge as Plotted from the Dragon King’s Lap by Kureha, Illustrated by Yamigo. Published by J-Novel Club.

Stranded in another world, Ruri makes use of an enchanted bracelet to disguise herself as a white cat. Through a series of events, she winds up the companion of the Dragon King. A delightful comedy of errors and magic. 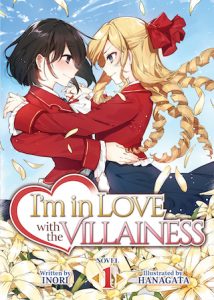 I’m in Love with the Villainess by Inori, Illustrated by Hinagata. Published by Seven Seas.

Rei, an office worker, wakes up in her favorite otome game, but she has absolutely no intention of romancing any of the boys! Rei is determined to win the heart of her favorite character, villainess Claire Francois. An LGBTQ+ twist on a familiar trope that has surprising depth and heart. 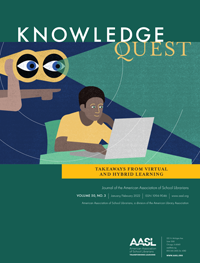