Looking Back at a Year in My Library World 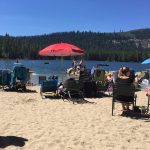 I usually think about libraries more than I should, but last week I went on vacation with six grandchildren, four parents, two dogs, and two grandmothers.  There was literally no time to think about work… but what can be more rewarding than a family vacation at Donner Lake on the eastern slope of the Sierra Nevada and about 11 miles east of Lake Tahoe?

I arrived home late Sunday and really didn’t have a library topic to start this blog… until I remembered it has been one year since I began to write for Knowledge Quest. I decided to look back at my library world and post an update on some of the programs and projects.

In “From eCard to One Card” (August 2016) I wrote about the Napa Valley USD and the Napa County Library partnership that allowed all secondary students to use their district-issued student ID card as a full-service public library card. And in “The Beginning of a Library Partnership Conversation” (December 2016) I wrote about our first panel discussion at the California Library Association’s winter conference. I still remember how we were overwhelmed by the enthusiasm and creativity of all who attended. Little did we know then that the lynchpin for the school and library partnerships would be the student ID to library card initiative.

A year later, more student/library card programs have been created and, by all reports, have been a resounding success. This school year Napa Valley USD, at the request of parents, will include elementary students in the One Card Program. And to top it off, the Pacific Library Partnership (PLP) announced the implementation of a state-wide LSTA (Library Services and Technology Act) grant called the Student Success Initiative. The grant will provide support to public libraries in creating partnerships with schools for library cards for students.

In September’s blog post, I explained SB 48 or California’s Fair, Accurate, Inclusive and Respectful (FAIR) Education Act. This act requires that the contributions of the LGBTQ community are included in the newly adopted Social Studies framework. In June 2016, the state’s Recommended Literature Committee added award-winning  titles to the list in support of SB 48.  Last month Tom Torlakson, State Superintendent for Instruction, recognized the updated list in a letter to all school district and county office of education superintendents.

In April 2017, I wrote about OER in “OER: One Size Does Not Fit All.” Napa Valley USD is a #GoOpen Ddstrict and an early adopter for Follett’s Collections and worked some with Amazon’s Inspire. I have a philosophical disagreement over the cost of curation and/or staff development for Open Educational Resources. Under Creative Commons licensing OER are defined as “…educational materials made freely and legally available on the Internet for anyone to reuse, revise, remix and redistribute.” This will be a subject for a future blog.

Finally the book that has influenced me the most this year has been Librarians with Spines: Information Agitators in an Age of Stagnation. Max Macias and contributors reminded me that there is more to librarianship that merely reading stories, cute bulletin boards, and charming programming. I believe we are here to be information agitators …to provide the books that will resonate and support our students through the good, trying, and devastating times that children and young adults experience. We are the ones who do not judge…we understand the questioners and the questions. We provide an important portal to that long journey to adulthood. We are smart, strong, and brave. Sometimes we need to remind ourselves about our own library journey.

Like Loading...
‹ But My Principal Won’t Let Me! Leadership, Advocacy, & Some Rebel Yell from the Library
Deliberate Thinking about Climate and Other Controversial Topics ›