Maria Montessori, one of the first female doctors in Italy, created her first school, Casa Dei Bambini, in 1907. She built her educational philosophy from years of study and careful observation of how children learn. Her philosophy, most famously explained in her book, The Absorbent Mind, has grown into a global movement, with 22,000 Montessori schools currently worldwide. 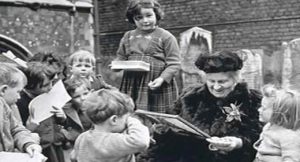 Maria Montessori’s core beliefs challenged society’s norms for educating young children. During her time, and sadly still today in some circles, the prevailing belief is that education is something teachers must impose on or force-feed their students. What Dr. Montessori discovered, through patient observation, is that children learn from their environment and by doing. She also recognized the need for individual learning and the concept of readiness for learning certain tasks. She observed optimal time or “sensitive” periods for learning, “a passing impulse or potency,” which varies from child to child. She also noticed how tactile and naturally curious young children are and decided to work with rather than against their nature: absorbent minds and attraction to hands-on learning. She observed how children reinforce their skills through teaching others: thus the multi-age learning groups. 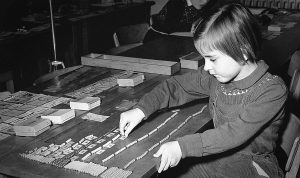 Montessori observed that environment is extremely important and worked to create specific materials and learning centers to facilitate active engagement and experimentation. Although her methods are over a century old, they have recently resurfaced in wider educational circles, particularly among educators reacting against standardized testing and traditional rote methods of learning. One particular group of experienced educators, librarians, have embraced the idea of “leaning by doing” in the rise of the makerspace movement. As teachers are called “guides” in the Montessori method, so today’s librarians become guides to their students, facilitating inquiry and discovery beyond direct teaching. One of the beauties of this approach is that it focuses on the positive aspects of human nature. Rather than trying to tame or suppress children’s “unruly” tendencies, both the Montessori and nakerspace approaches seek to embrace the messy artistry, inquisitiveness, and enthusiasm inherent in children. Furthermore, in this setting students naturally take ownership of their own learning, which empowers as well as motivates them. 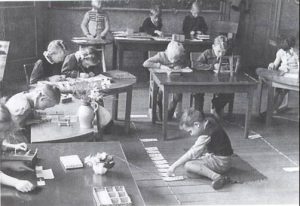 The makerspace has its own special evolution in libraries. As far back as the 1870s, women’s groups formed and met in libraries to quilt, knit, and socialize. The current makerspace movement combines both low- and high-tech, from knitting to 3D printers and circuitry. Makerspaces evolved from a library arts and crafts center to one that embraces both science and art, enhancing and combining both fields through technology. 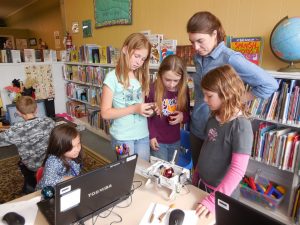 My library director in Austin ISD, Elizabeth Polk, likes to say that librarians don’t have to know all the answers. We just have to know where and how to find the answers. This faith in pursuing knowledge independently through research and continually asking questions is why librarians make such perfect makerspace facilitators or guides. On the other hand, for many of us, giving up the reins of control can be a challenge. After all, we want all our books in order and feel naturally uncomfortable without a lesson plan or system to follow. Ironically, by letting go of control and allowing our students to do the work, we find even greater expertise and confidence as master educators.

Austin’s Wooldridge Elementary librarian, Elizabeth Mikeska-Benfield, was an early pioneer in the Austin ISD makerspace movement, which now includes multi-school events, such as Makerspace Mania. Mikeska-Benfield began with Legos, which her students rapidly began to embellish with recycled materials, and has continued to expand her makerspace into all kinds of tinker time activities. Maria Montessori would definitely approve. 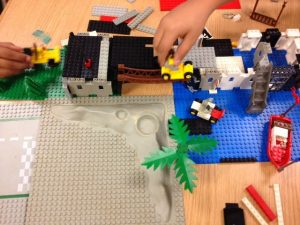 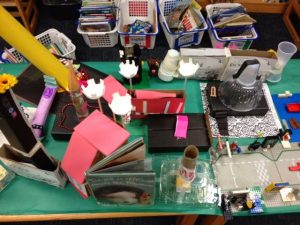