A couple of blog posts ago I wrote that I was evaluating my stance on school library fines. Since then my co-librarian has warmed up to the idea, and we’ve been planning how we are going to phase out fines. I also started working with the ALA working group Resolution on Monetary Library Fines as a Form of Social Justice.

This ALA appointment comes at an interesting time for me since my co-librarian and I are actively assessing our stance on fines and trying to figure out the best way to implement this new policy. Fortunately, our administration is supportive and even though I don’t have the answers to all of his questions, our principal is willing to let us figure it out.

For librarians who are thinking about ditching fines, what kinds of information/resources do you think would be most beneficial to your efforts? For instance, our principal asked us to write a proposal and policy on removing fines. I would be very interested to read some library fine removal policies already in place.

Something else I think would be useful for me is seeing specific examples of fine removal in school libraries comparable to the size and population of our school library. Our school is fairly large, and solutions/strategies that work in smaller schools don’t always work for us. Being able to see what fine removal looks like in real life for a wide variety of libraries could help with troubleshooting and the practical application of a fine removal policy.

For those who aren’t really sold on the idea of ending library fines, what would you need in order to reassess your stance? My co-librarian wasn’t excited about ending fines. She felt like late fines motivated students to return books, and removing fines removed an opportunity for real-world lessons about accountability. What changed her mind was the combination of Googling some articles and the student who told us he wasn’t going to check out a book because he was worried about having late fines and getting in trouble with his parents.

For anyone who hasn’t really considered removing library fines, now could be the right time to reevaluate your library’s policy. My co-librarian and I never thought about ending fines until one day we realized our main reason for having late fines was that’s how it had always been done. We’d allowed ourselves to become stuck in a pattern, supporting a practice we had never questioned. Once we understood it as an accessibility issue, we began to dissect our fine/fees policy and assess the reasoning behind it. 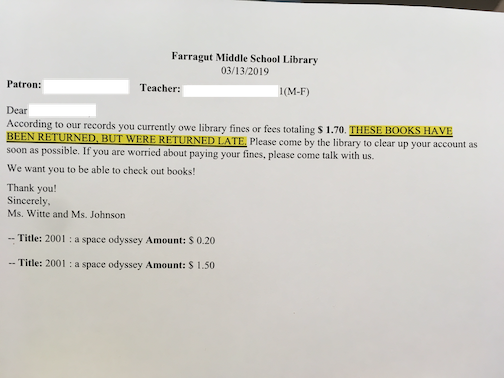 fine notice example-we’re still in the process of removing fines, but this is what we would’ve sent to a student