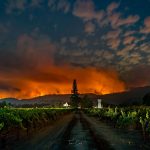 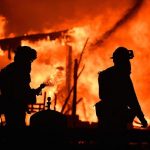 It was a week of fires, smoke, fear, and boredom. We prayed and watched as the fires spread over Napa Valley, Sonoma, and farther north. We held our breath as the entire town of Calistoga was evacuated…and were terrified that the Patrick fire was spreading into a neighborhood where so many of our friends and co-workers lived. The high winds blew down power lines and helped burn down cell towers. So many of us had no power and no way to communicate with family or friends.

Many of us took in evacuated families and volunteered at shelters. We babysat, played board games, and read. Those of us who had power made cookies and casseroles for the shelters and binge watched Netflix series or old movies. But no distractions could help with the worry about our families and friends.  We watched the anguish of those who lost homes, possessions, and loved ones. In the midst of this tragedy, we marvelled at the bravery of California, national, and international firefighters. We cried while we watched the YouTube video of the Samoan firefighters singing hymns as they set fire lines. We continue to be awed by the dedication and heroism of all first responders. Later we learned that our vineyards had acted as breaks and helped to keep the fires from spreading throughout our beloved Valley. 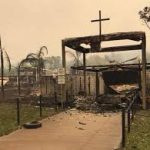 We were horrified by the pictures of the burned library at Cardinal Newman High School in Santa Rosa. And, of course, we all began to worry about the county’s more rural schools, especially Calistoga, Howell Mountain, and Pope Valley. Fire, soot, smoke, and water damage were on the top of our lists. Napa USD libraries have been through two major earthquakes and some flooding, but never three devastating fires that were out of control for days.

Even though there was major containment in a little over a week, all county schools were closed for another week. The fires had been brought under some control, but the air quality remained at dangerous levels. District maintenance workers cleaned the soot out of classrooms and libraries while replacing hundreds of air filters. All athletic events including football games and homecomings were cancelled until further notice. District staff tried to go to work, but most were sent home because of the air quality. The no-work week gave us time to think about a recovery plan for the possibility of damaged collections and materials. Some of us wondered if increasing our digital footprint would act as a safety guard… power can often be restored before insurance monies are generated for burned or damaged print collections. Probably a controversial decision for some, but then we are a technology-nimble district. As a side note, many of our vendors including Follett, OverDrive, and Gale have reached out to us with kind words and offers of support.

We are now a member of that unenviable group of natural disaster survivors. We share that bond with our colleagues who suffered catastrophic losses from recent tornadoes and the horrifying hurricanes Harvey, Irma, and Maria. Some of these disasters are larger and more severe, but we all feel the same pain and sadness at the loss that our communities, schools, and, for us, libraries have suffered. However like those who have tweeted, we remain #LibraryStrong!

Like Loading...
‹ Transform Your Practice with a Look at Best Practices in the Nov/Dec Issue
Teaching Research to Preserve Democracy ›