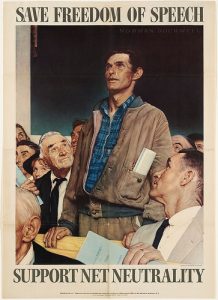 On July 12, 2017, the American Library Association (ALA) and nearly 200 other organizations participated in Day of Action, a protest to save Net Neutrality. What is Net Neutrality? It is “ [the] principle, or requirement that Internet service providers should or must treat all Internet data as the same regardless of its kind, source, or destination” (Merriam-Webster). Prohibiting discrimination or preferential treatment by Internet service providers (ISPs) maintains a free and open Internet for all users.

Net Neutrality has been a contentious issue both for Internet users wanting an open Internet and Internet service providers trying to institute “tiered service.” The Federal Communications Commission (FCC)) tried over the years to institute rules to protect the principle of Net Neutrality but faced court challenges (FCC, Adopts). Finally, in February 2015, the FCC issued the Open Internet Order, which created rules to protect Network Neutrality and defined broadband Internet access service as “a telecommunication service” to be regulated under Title II of the Communications Act (Joyce).

The FCC’s 2015 Open Internet Order did not end the debate. Prior to being designated as FCC chairman by President Donald Trump, Ajit Pai was critical of the 2015 Open Internet Order and is now in a position to make changes and reverse Net Neutrality protections. Many organizations including ALA sent comments to the FCC supporting retention of Net Neutrality. A press release from ALA emphasized that “our nation’s 120,000 libraries—and their patrons—depend on fair access to broadband networks for basic services they provide in communities like connecting people to unbiased research, job searches, e-government services, health information and economic opportunity” (ALA, ALA Argues).

Why YOU Should Care 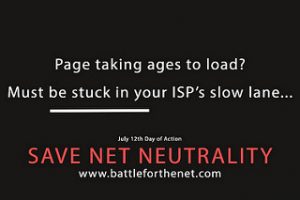 As a school librarian you are committed to access to information in any format for your students. In many schools, librarians and other educators already struggle to overcome overly restrictive filtering so that students, especially those without the Internet access at home, can find resources for assignments and personal information needs. Having an open and accessible Internet is important for all types of libraries, and the future of Net Neutrality now hangs in the balance. If it is undone, Internet service to schools and school libraries will be affected. Schools and libraries’ Internet access could be relegated “to the Internet’s ‘slow lanes'” (ALA, Net Neutrality).

What Can You Do?

Become knowledgeable about Net Neutrality to protect online access to information in schools and libraries. Additionally take these actions:

ALA. “Net Neutrality. Why Does Net Neutrality Matter to Libraries?” http://www.ala.org/advocacy/telecom/netneutrality/ (accessed July 21, 2017.

Like Loading...
‹ So You Want to Publish a Book: An Interview with Denise Ditto-Satterfield
Animal Research Meets Reading, Writing, and Flipgrid ›