New In November: Two YA Titles You Don’t Want To Miss

One of the professional goals I set for myself this year is to do a better job of keeping up with new book releases. To help me do that, I registered for a NetGalley account and use it to read digital review copies of books before they are published. Two of the young adult books I recently read courtesy of NetGalley are scheduled to be published in November. I loved them both and cannot wait to share them with my students. Here they are: 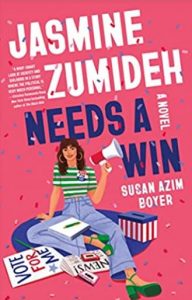 Jasmine Zumideh Needs A Win captures the national mood of the early days of the Iranian Hostage Crisis. Jasmine, a high school senior and the daughter of an Iranian father and American mother, is hoping to leave California after graduation and study journalism at NYU. But first, she has to be accepted to the prestigious institution. Needing that “something extra” to make her application stand out, Jasmine runs for senior class president. The NYU application is due before the election, so she says on the application that she’s already been elected. She expects to win, so it won’t be a problem, right?

Less than a week into her campaign, Iranian student protesters seize the U.S. Embassy in Tehran and take American hostages. The anti-Iranian sentiment at Jasmine’s school is immediate and virulent, threatening her chances of winning the election. Jasmine tries to downplay (if not hide) her Iranian heritage, which is difficult when her brother exercises his First Amendment rights to defend the Iranian students and educate his classmates about previous U.S. interference in Iran. Suddenly, Jasmine finds herself at odds with her brother (more so than usual) and running a questionable campaign full of dirty tricks. But she justifies it by telling herself that she has to get accepted to NYU and that her opponent is a jerk.

On top of all the campaign drama, Jasmine’s parents are on the verge of divorce, her friend group is falling apart, and there’s a cute new guy at school she likes.

Although YA readers may not be familiar with some of the historical references  (Patty Hearst and the Symbionese Liberation Army, for example), they will relate to the themes of identity, cultural conflict, family issues, and teen romance. The multiple subplots keep the story moving at a pace that will keep teens engaged.

I also think there’s an audience for this book among adults who were teens during the Iranian Hostage Crisis. As one such reader, I really enjoyed this book and thought it depicted that period in U.S. history very well.

The end of the book seems a little rushed (perhaps because I wanted more), but overall this is a compelling story that will appeal to YA fans of historical fiction. Highly recommended. 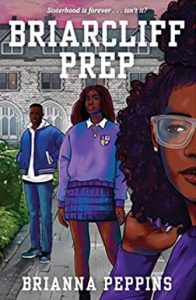 Following family tradition, 14-year-old Avi LeBeau enrolls in Briarcliff Prep, a Historically Black Boarding School for girls  that her older sister Belle also attends. Avi arrives at with a mixture of nervousness and excitement, having waited for this moment for a long time. She looks forward to making new friends, settling into campus life, and hopefully earning a spot on the school’s prestigious newspaper.

Author Brianna Peppins has written a compelling “school story” that interweaves many of the typical struggles high school students face. For instance, while Avi finds a strong friend group composed of girls who support each other, she also encounters mean-girl politics on campus. A successful student overall, Avi excels in English but struggles in math. She finds herself attracted to a sophomore, a math whiz who offers to tutor her. While each of these plot points could be mundane in the hands of a less-skilled author, Peppins’ emphasis on Avi’s emotions combined with strong depictions of all the characters draws readers in and allows them to experience (or in some cases re-live) the struggles right along with Avi.

The most serious crisis Avi confronts, one that Peppins handles sensitively, involves Belle’s boyfriend. From the moment she meets Logan, Avi feels something isn’t quite right about him. Over time, she notices how possessive he is of her sister and can’t understand why Belle puts up such behavior. When Avi accidentally learns the truth about Belle and Logan’s relationship, she has to decide whether to speak up and risk her relationship with her sister or keep quiet and hope nothing tragic happens.

While this book will undoubtedly hold a special appeal for Black girls, it is sure to find a wide readership among teens who enjoy realistic fiction due to its themes of friendship, family, belonging, and loyalty. Highly recommended.