Home › Blog Topics › The News Is Bad. Should We Have It On in the Library?

The News Is Bad. Should We Have It On in the Library? 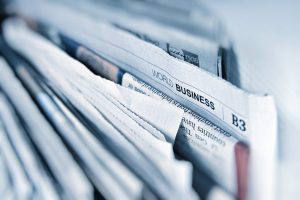 A sophomore stops in her tracks. “Wait,” she says to me. “What is happening?” She is looking up at the large, flat screen television mounted on the wall that plays muted, closed-captioned, all-news broadcasts throughout the day. The news is showing an update on a student protest at a local university.

This happens almost every day in our library–we play live news and kids stop and ask questions. It has become an integral part of our school culture–one that I wouldn’t change for all the world.

But some people have concerns about this. The news, after all, has been pretty difficult to swallow recently. Day after day we are introduced to a new chaos, tragedy, or devastation, and sometimes it feels easier to avoid it altogether. Why would we expose our students to it? The news can be biased, critics say. There’s too much bad news, they bemoan. We shouldn’t have television on all day long, they lament. It’s not good for kids to always watch the news, they warn.

I disagree for many reasons:

As libraries, we need to be on the cutting edge of teaching emerging and divergent literacies to our students. In a time when “fake news!” is flung from Twitter accounts, we need to be sure that news is present in our schools. In our library we have switched between channels when national news is occurring to compare coverage; we change stations each day, giving a nod to Fox and CNN. When students comment on running headlines, we help them double check accuracy. If we ignore the 24-hour news cycle presence in our students’ lives, we are doing them a disservice by undervaluing the important role journalism and the media plays, never allowing for just-in-time conversations about bias and fact-checking.

Many students are not aware of international situations. While the whole country turned its eyes to Houston during Hurricane Harvey, thousands of people were losing their homes and lives in Indonesia and India to record-setting flooding. Our students were unaware. We want our kids to act locally and serve their communities, but they also need to think globally and recognize the impact international situations have on our more immediate worlds. When students see global news stories playing, they are exposed to their greater world, building empathy and geographical knowledge, while also following patterns of cause and effect.

An informed populace is the driving force behind a thriving democracy. We want students to grow up and vote. We want them to make decisions based on factual evidence. We want them to drive change that is based on truth. As school libraries, we must insist that we expose students to the kinds of situations that allow them to routinely build media-savvy habits that allow them to grow into responsible, thoughtful, fact-driven citizens.

Some of my favorite moments in the library have taken place with a group of students around the television. They eat lunch, huddled around the TV on opening day for the Red Sox. They ask to turn up the volume for presidential press conferences. The day after the 2016 election, they piled in to watch Hillary Clinton’s concession speech and then streamed Donald Trump’s acceptance speech from the night before. They pile in during the Olympics and watch hockey games. The news and live events have become a means for our students to build a sense of community where they can gather, celebrate, question, grieve, and listen intently.

Ultimately, of course, we must be aware of the effects the news and media has on our students. We have turned off the news for short stretches of time when we sensed that our kids needed a break from the incessant bad news. But avoiding it altogether denies the reality that our students are exposed to news anyway. Let’s expose them to it in environments where measured, educated dialogue can help them make meaning of it. Turn on the news–encourage conversation–build literacies, citizenship, and community. It’s what our students need more than ever right now.

Angie Miller is a 7-12 school librarian in Meredith, NH. The 2011 NH Teacher of the Year and the recipient of the 2017 NH Outstanding Library Program of the Year, Angie is a TED speaker, National Geographic teacher fellow, and freelance writer who writes for her blog, The Contrarian Librarian, and is a regular contributor to sites like EdWeek and the Washington Post’s Answer Sheet. As a co-founder of the initiative, Let the Librarians Lead, Angie leads professional development, speaks to audiences, and advocates for school leadership through librarianship. Her book, It’s A Matter of Fact: Teaching Students Research Skills in Today’s Information-Packed World, published by Routledge, will be on shelves in April 2018.