Home › Blog Topics › News or Not

Following the November 2016 Presidential election, there was great concern about fake news on Facebook and in Google searches. And then, in what seemed to be perfect timing, a Stanford group released the study “Evaluating Information: The Cornerstone of Civic Online Reasoning” on November 22, 2016. The report conducted by Stanford History Education Group was an 18-month study that started well before the recent concerns about all of the online fake news. The results of the study show that students all the way to college age are not recognizing the basics of evaluating a source.

I was surprised that my own reaction to fake news was very different than the reaction of those around me. My reaction was not one of outrage but instead a motivation to teach lie detection and deeper information literacy skills. A focus of mine has been on older high school students, particularly those transitioning to college, career, and life. Many of these students actually voted in the 2016 Presidential election. With these upper-level students, I am hoping to add to the strong foundation of AASL’s Standards for the 21st-Century Learner. The Association of College and Research Libraries’ Framework speaks to the moving target of authority in the 21st century. It states that “Authority Is Constructed and Contextual…  Experts view authority with an attitude of informed skepticism and an openness to new perspectives, additional voices, and changes in schools of thought.”

Where and What News?

Students are looking more and more to social media for their daily news. The Pew Research Center reports that for Millennials social media is like local TV. When asked how they get their news about politics and current events, many of my students said Snapchat stories. Therefore, examples of Snapchat sources may be something we need to be aware of and know how to teach. If you need the Snapchat basics, check out this NPR training. It is no longer effective to say “don’t get your news from Snapchat.” Instead, we must teach students to verify this news and know how to cite the information. 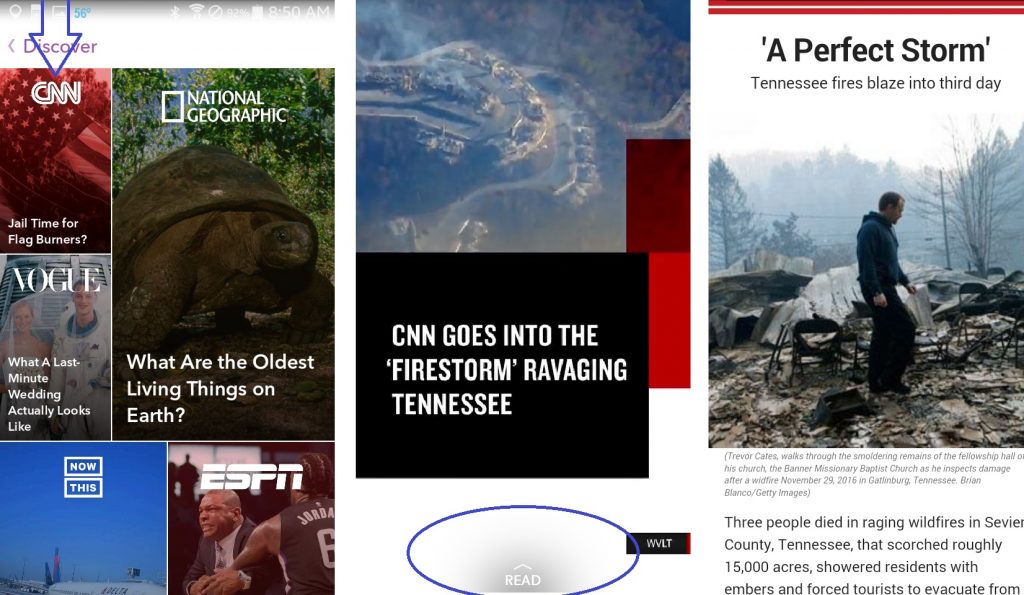 Some of America’s funniest and most intellectual comedy is satire. It is not uncommon for these satirists to use parody or exaggerated imitation without any explanation. In recent history, shows like The Daily Show, Saturday Night Live, and The Colbert Report present “news” on television. In 2010, Steve Colbert actually testified to a Congressional committee seemingly in character. So what is different about this kind of satire and the recent fake news that permeates social media and the Internet. The biggest difference is that one is watched and the other is read. In fact, many expressed concerns during the 2008 election that young voters were getting their political news from programs like The Daily Show with Jon Stewart.

History of Fake News – Nothing New.

This is not the first generation to report fiction as news. The Smithsonian reports Orson Wells made the history-making “War of the Worlds” broadcast in 1938. Some still question if the 23-year-old Wells knew what he was doing when he aired the radio broadcast. And in print and online news, according to their own website The Onion is the world’s leading news publication, offering highly acclaimed, universally revered coverage of breaking national, international, and local news events.” The Onion has been around for almost 30 years, first in print and then later online. Students should be introduced to satire and news parody online so that they can tell the difference.

Other American satire news sites include:

The biggest takeaway from the latest fake news phenomenon is that this is certainly for librarians the definition of a teachable moment.