Pairing Picture Books and Primary Sources: Anything But Ordinary Addie: The True Story of Adelaide Hermann Queen of Magic by Mara Rockliff 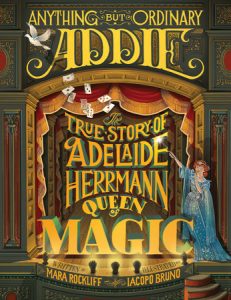 Anything But Ordinary Addie

A picture book often is a wonderful 32 pages with a distinct beginning, middle, and end. When picture books depict a historical event or individual, the story often does not stop there though. Primary sources can help students ground themselves in the story in the picture book and then go beyond it to learn more. This was exactly what I found out when searching for primary sources related to Mara Rockliff’s Anything But Ordinary Addie: The True Story of Adelaide Herrmann Queen of Magic.

The picture book illustrates the life of Adelaide Herrmann, wife and performing partner to magician Alexander Herrmann, who upon her husband’s passing took over his act and made it her own. It shows Addie as a risk taker, powerful and determined.

Connecting the Picture Book to a Person in History

Primary sources can play a role in supporting the image portrayed of Addie in the picture book. Students may begin by analyzing a poster advertising the Herrmanns’ magic show. Ask students: 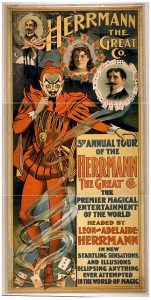 Students will likely surmise that Addie was an important part of the act because her name and Alexander’s are the only two mentioned in the poster and her image appears alongside his. While her role is unclear, she clearly is important to the show.

To learn more about Adelaide, share articles from The Sun and The Daily Morning Journal and Courier. They each briefly give different accounts of her role in the show and were written just months before her husband, Alexander, died. Ask students the same questions from earlier to give them an opportunity to add to their understanding of the person and affirm aspects of the book.

A month after Alexander’s death in late December of 1896, there is evidence of the bullet-catching trick Rockliff writes about. An advertisement in the January 24, 1897, New York Journal specifically advertises the trick that will take place four days later at the Metropolitan Opera House, which bears a striking resemblance to Iacopo Bruno’s illustration of the event in the picture book.

Looking at the Person in History Beyond the Story

Articles after Alexander Herrmann’s death do show that Adelaide was taking over the reins of the show, but they also show another part of the story. Give students an August 1897 article from The Courier. Ask students how the article compares to the information shared in the picture book. Students will point out that the article tells of Leon Herrmann, Alexander’s nephew, who also appears in the show and billed himself as Herrmann III. 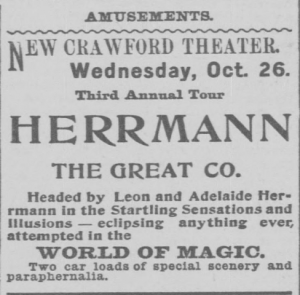 Students could search Chronicling America for more evidence of the Herrmann’s act following Alexander’s death. Advertisements for the show reveal that both Adelaide and Leon are billed as attractions in the performance. In fact, Leon is listed above Adelaide in advertisements. An 1899 article from the Topeka State Journal documents the falling out between Adelaide and Leon. More searching shows that the show does indeed go on as Adelaide continued to perform magic across the country.

No historically focused picture book can take into account every element of a person’s life. It often, in fact, does not make for a good story. Students analyzing primary sources can begin to reveal the history that exists alongside the story.

For more primary sources related to Mara Rockliff’s Anything But Ordinary Addie: The True Story of Adelaide Herrmann Queen of Magic look at the curated primary source set that I’ve created to accompany the book.

Like Loading...
‹ Encourage Conversation with a Compelling Illustration: A Lesson That Supports the AASL Standards Framework for Learners
Mentoring: One Size Does Not Fit All ›