Pairing Picture Books and Primary Sources: Revisiting a Pairing with Hidden Figures: The True Story of Four Black Women and the Space Race

After writing for the KQ blog for a few years, I am lucky enough to speak with educators about their own pairings of picture books and primary sources. Recently, Amanda Jones, a fellow KQ blogger and amazing school librarian in Louisiana, reached out with a brief message. A larger lesson that included the picture book Hidden Figures, as well as related primary sources, was described by her students as “boring”.

That word is dreaded. And it also intrigued me. What was leading students to have that reaction? I asked Amanda if she would be willing to share her activity and also wondered if she wanted suggestions to “jazz up” the primary source piece. She agreed to both.

Primary Sources in the Original Lesson 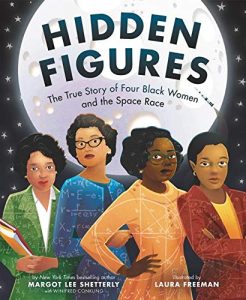 In the original lesson, primary sources, all portrait photos, came in after the reading of the picture book. Students were asked questions that encouraged them to look more closely at each photo.

That last question asks learners to make a connection. Amanda described the discussion as “great” but her students were not feeling the same way. Looking at both the selected sources themselves and how they were used within the lesson can provide insight into ways that the lesson could be modified. 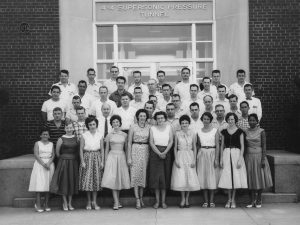 The primary sources used within the original lesson were portraits. While I love the use of portraits as primary sources, many of these portraits, all women connected to the US space program, left little for the students to explore.

One exception was a photo of a group of about forty people with computer, Mary Jackson, in the first row to the far right. There was a bit of mystery to the photo and if explored before reading the story, I thought it could lead to a lot of questions from students that could lead nicely into the reading of the picture book.

I shared with Amanda:

I’d suggest doing your whole group look at the primary source before you read the story. When you do it after the story, the students have many of the answers. There’s very little mystery. But if you do it before, I’m seeing a photo with almost all men, very few people of color, that looks like it is from the mid-20th century where there are standing in front of a building labeled Supersonic Pressure Tunnel! So many questions! Who are they? Pilots? Potential explorers? Why so many men? What about that one Black woman in the front corner? Then the story (which now has a new purpose–to answer the questions they have) helps to fill in the gaps and maybe even leads to more questions.

The analysis of that primary source could lead to a great introduction to the picture book, but what could students explore after they read the book?

Amanda already had one great activity after the picture book. Students would use AR to explore the spaceship Endeavor. But could we fit in another primary source? Since primary sources had been used in the original lesson after the book, I went on the search. Katherine Johnson was focused on in the picture book and I wanted to try to continue that focus. I also wanted a format as engaging as the AR that Jones was already using with students. For me, that meant an audiovisual format.

For audiovisual sources during this time period, I thought the American Archive of Public Broadcasting would be a great starting point. The AAPB contains thousands of recordings and many public broadcasting news shows. A search led to an interview with Katherine Johnson that took place several years after her time with NASA. 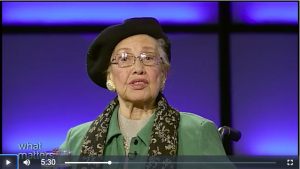 One thing that I thought was important was how the use of the primary source interview was introduced to students. I suggested to Amanda:

​​If you… read the picture book as a look at a moment in time of Katharine’s life, the Endeavor 3D field trip becomes a look at what became of the space program that Katharine was an integral part of.

If students are viewing that solo, then my guiding question I pose at the beginning and circle back to at the end might be, “This isn’t one of the original ships that went to space. As you view and listen, what evidence is there of mathematics or calculations that are probably done by computer now.” This could open up students to considering construction, launch, work done in space, or astronaut interactions.

Then, for a primary source, I’d bring in this interview with Katharine. And I would ask, “We’ve looked at what Katharine accomplished at NASA. You’re looking at what Endeavor shows us about the future of NASA. Let’s look at Katharine’s Origin Story. She shares a lot about her past in this interview. Listen for evidence of what made her the person she became.” This prompt then lets students focus on so many parts of the interview from her drive to her mathematical ability to family influence and sacrifice.

Amanda Jones took some of those suggestions and did a new lesson with another class. I hope to talk with her soon so she can share the results. If we can talk, I’ll be sure to share it on an upcoming podcast episode.