Last month I helped to give a workshop in Lexington, Kentucky, through a grant called Project CHARGE (Civics History through Advanced Research and Geography Education). Over five days, elementary and middle school teachers focused on mid-17th-century history through the adoption of the Constitution. For one of my sessions, I was asked to pair a picture book and primary sources from this time period. It was a challenge, but the activity worked so well that I wanted to share it here in this post. 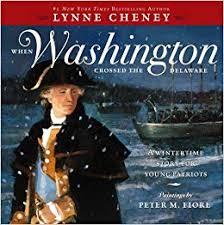 When Washington Crossed the Delaware

While reading potential titles, I continually asked myself, “Is there content here that would be referenced in historical documents?” When pairing these two together, there has to be a solid connection of a specific moment in time through an individual or event.

After some initial searches, I settled on When Washington Crossed the Delaware by Lynne Cheney and Peter M. Fiore. The book gives details not only of the crossing but also of the events leading up to and following it. While there were details, it was not exhaustive and it appeared that primary sources of the event could help to enrich the understanding of the event.

There is not an overwhelming number of primary sources that were easily found connected with the event that could be used for upper-elementary and middle school students. Using multiple formats was also a consideration.

A report from Washington to the Continental Congress giving a brief account of the crossing and battle as well as a map were chosen for the activity. Reading the letter, book, and map helped me to envision how layering information could help inform students about this event in an active and engaging way.

Without telling participants the event they would be investigating or who wrote the letter, they were asked to read the letter for information that may give them insight into an event being written about from the American Revolution. Focusing on keywords and short phrases, they wrote their findings on sticky notes. They then looked for patterns, working with others and their notes to group the sticky notes however they saw fit. There were sticky notes grouped around geographical references, military references, movement, and other topics.

Participants shared some of their ideas of what the event may be. A couple were clearly on the right path. Many were not, but there was strong evidence that they were taking details from the letter and their own knowledge of history to create understanding.

Layering in the Picture Book 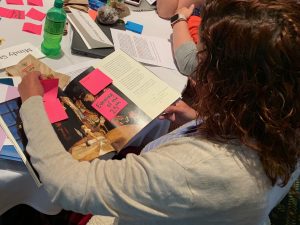 Then the groups read the picture book. As they read, they looked for information that was in the letter. Readers took the sticky notes from the last activity to mark pages where they found corresponding information. New information was also identified, although they did not write it down.

Doing this part of the activity with students allows them to make connections between the book and the letter. It also provides a context for the many who had misconceptions in the first activity. Why not start with the book and avoid misconceptions? Beginning with the letter encourages participants to read closely and engage prior knowledge. Knowing that the letter was written during the time of the American Revolution gives them a period to draw from when activating that prior knowledge.

Finishing with a Historical Map 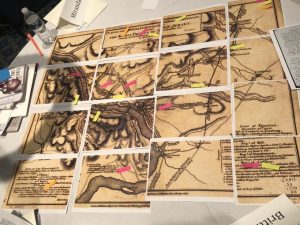 Details from the event continue to be shown in new ways, interpreted by the participants, reinforced, and new information added. That new information is more easily understood because of the growing context from the activity.

Why was the famous painting by Leutze not included in this activity? It is not actually a primary source of the event having been painted about sixty-five years later. It could be included in a different learning activity, but it would certainly not tell participants what was known from the time of the event.

Like Loading...
‹ Do You Need Lesson Ideas to Make Global Connections? Try These!
The Changing Winds of Grant Writing ›