There are great nonfiction stories that show the growth of a character and then there are great stories that show the resolute nature of a character when people change around her. The latter is what drew me to the picture book Dangerous Jane by Suzanne Slade. The story of Jane Addams, activists for peace and the poor, chronicles Jane’s growth into a person who served others. 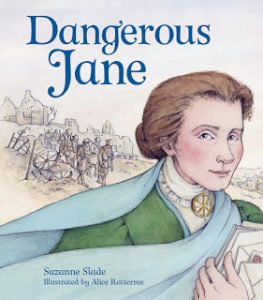 One moment in the story gives an account of some in America who turned against Jane Addams and her work, who she helped, and how she helped them. It is a piece of evidence of changing perspectives during the time of the Great War. Pairing primary sources, specifically historical newspapers, with the picture book can help students explore how many in the country perceived Jane Addams at different points in history and why those feelings changed for some. Historical newspapers are powerful resources to explore multiple perspectives as well as change in events or attitudes over time.

After reading the picture book, ask students to identify how people felt about Jane Addams after she opened Hull House. Many may draw directly from the book, sharing that people loved her. Asking for evidence, students may struggle, but you can return to the book where Slade shared names given to Addams such as “Miss Kind Heart” and “Saint Jane.” 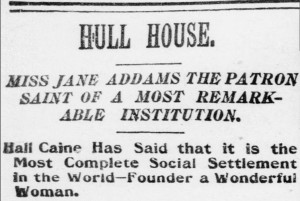 Now tell students that they will look for evidence from the time period that tells how many felt about Addams. Choose one or multiple articles dated before 1915 from this curated collection of historical newspapers. For younger students or if time is limited, select a portion of longer articles, such as a February 14, 1906 article from Waterford Republican, that illustrates how others perceive Addams. Ask students how those who read the articles during the time likely felt about Jane because of the article. Many will share positive responses, possibly describing her as selfless, caring, or even a saint. Asking why they may feel this way, many may share about her work at the Hull House and the help she gave others. Ask students to identify specific words or phrases in the article to support their thinking.

Shifting the Focus of Analysis

Next, revisit the picture book, sharing the pages about some not approving of Jane Addams’s work. Discuss the reasons people disliked Jane later in the story. Many responses may revolve around her assistance to Europeans during the war.

Share with students that they will again analyze newspaper articles about Jane Addams, this time published during or after WWI. Revisit the curated collection of historical newspapers, this time choosing articles dated 1915 or later. Articles like one from the February 27, 1920 article from the New York Tribune shed light on specific criticisms of Addams’s perspectives on how to achieve peace during times of conflict. Students may recognize that WWI had ended by the time this article was published, and may give evidence to lingering or delayed reaction to Jane Addams’s perspectives toward the war.

Other articles defend Jane Addams’ opinions, or her right to state them, such as a 1915 article from The Commoner. As students explore these articles, encourage them to look for evidence of the feelings towards Addams as well as why the author of the article feels the way they do. Students can highlight or underline specific words or phrases to support their claims.

As students analyze articles, they will also have personal reactions to Jane Addams, her critics, and her supporters. Encourage students to identify those personal interpretations to historical events.

Reviewing these articles can reveal the complex views held by the nation at the time around war and peace and how those multiple views saw the work and words of Addams. Students may be left with uncertainty of how Jane Addams is viewed historically. A return to the last page of the picture book, where Slade writes of Jane Addams being awarded the Nobel Peace Prize in 1931 may help to answer that question and encourage them to explore other modern-day accounts of her work.

Like Loading...
‹ Books for 8th grade only: Reasonable or infringing on accessibility?
Enrich Your #AASL17 Conference Experience with Social Media ›