Like many of you, I love picture books. But there is one type of picture book that holds a special place in my heart: the nonfiction picture book. That’s probably because I’m also a lover of history, and many of the authors and illustrators of these books find a way to highlight a piece of history that I knew little about or show it to me in a way that makes me want to know more.

By sharing these nonfiction picture books with students, I hope to pass along that interest in history, that awe of discovery of a moment that they knew little about, and that desire to know more. I’ve found that pairing picture books with primary sources from the topic of the book can be a powerful way to experience the book and connect with history.

Take, for example, Soldier Song: A True Story of the Civil War by Debbie Levy, illustrated by Gilbert Ford, an account of the Battle of Fredericksburg focusing on the role music played for Union and Confederate soldiers. The book’s text and illustration focuses around music and letters home, conveying the many feelings that soldiers had during this battle.

Exploring some of these same accounts of the battle and listening to music that these soldiers listened to can encourage students to explore and connect to the feelings and emotion of the moment.

After reading the story, begin by asking students how the soldiers felt during the Battle of Fredericksburg. They may suggest feelings such as scared, homesick, or sad. Follow up with more pointed questions.

In all cases, as students interpret the music, encourage them to make specific observations about the music to support why they emotionally react to the music or why they think a Civil War soldier may feel a certain way when hearing a song. Students may make observations about tempo or instrument choices. If you have a music teacher in your building, this is a great opportunity to collaborate. 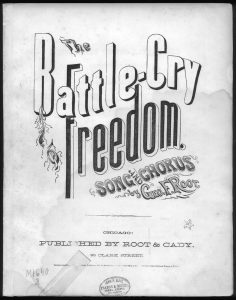 Debbie Levy also includes verses to several songs. Looking at the song as a whole may reveal more about how soldiers would react to hearing it. In “God Save the South,” students can make annotations, marking words and phrases that have strong meaning, repeated ideas, or are surprising. While the perspective for the song is obviously from that of a Confederate, identifying perspectives in individual lines may help students better understand the messages in the text.

Battle Cry of Freedom has both Union and Confederate sheet music. Following the same activity as above and then comparing findings between the two may provide an even deeper understanding.

As students identify feelings and emotions they believe soldiers held, they can look for further evidence in actual letters and accounts from Union and Confederate soldiers from the battle. Students can examine the excerpts in Levy’s book to find evidence of these feelings, but examining the full letter may provide even more insight. Union soldier Henry Frank Babcock’s letter home gives additional details about the battle, while Confederate soldier Frank Mixon gives an account of the soldiers’ reaction to song on page 37 of his chronicle of military service. Students can make observations, looking for specific language that shows emotion as well as events that would elicit emotions from the soldiers.

*Note that the content in Civil War letters and accounts may contain graphic descriptions that may not be appropriate for all students.

Soldier Song shows us that Union and Confederate soldiers’ feelings during battles couldn’t be painted with a broad brush. Instead, they had different emotions at different moments. Music played a role in bringing out those feelings and that influence was documented in the letters from soldiers and soldier accounts of the battles. Pairing primary sources with Levy’s book encourages a deeper exploration of those emotions.

*Many of these primary sources were found on the Library of Congress website, LOC.gov, by searching audio recordings, notated music, or manuscripts. A curated collection of primary sources, including related images, for Soldier Song, can be found here.

Like Loading...
‹ Hidden in Plain Sight: Information Literacy in the Age of Google
Science Activities to Try Next Year ›