Pairing Picture Books and Primary Sources: Take a Picture of Me, James VanDerZee!

As we work with written primary sources, we may ask students to identify the perspective of the author. What message is she trying to convey? How does he want the reader to react? We do not often do that with photographs. The pairing of a picture book and primary sources gives us the opportunity to have the discussion.

Inspiration for the Book Selection 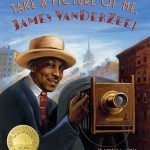 Take a Picture of Me, James VanDerZee!

Every year, my elementary school has a school-wide study focused on an African American or an event positively influenced by African Americans. The learning culminates in an evening celebration around the person or event that incorporates song, dance, art, writing, and speaking to share their learning and understanding. This year the school studied the Harlem Renaissance.

We have studied poets, artists, and musicians, their history, work, and influence. I came across the picture book Take a Picture of Me, James VanDerZee! by Andrea J. Loney, detailing the story of VanDerZee, an African American photographer who, during the Harlem Renaissance, photographed the Harlem community.

One aspect of the book that I found intriguing was VanDerZee’s use of backgrounds, clothing, and props to show his subjects at their best and alterations of photos in the darkroom to make his subjects look even better. When I read this, I knew I had to share this book and VanDerZee’s photos with my students.

Interacting with Portraits as Primary Sources

A search on the Digital Public Library of America results in several photos by VanDerZee held at three different institutions. Along with a photo of VanDerZee himself, the set of primary sources around his work supported the picture book. 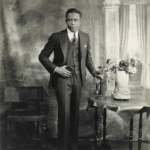 After reading the book about VanDerZee, I share several photo portraits by VanDerZee from the primary source set with my older students, I pose questions that encourage students to react to the sitter in the portrait.

To continue to explore emotion and feelings, I use the Strike a Pose strategy, asking students to mimic the pose of the individual in the photograph. Looking at the photograph and taking on the posture and even facial expression of that person, I ask more questions. 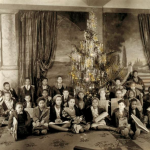 Returning to the picture book, we look for evidence of VanDerZee’s influence in the photos. I ask students about one line of the book, “In the darkroom, James made their pictures look even better.” I share two more photos, “GGG Photo Studio at Christmas” and “Father Divine,” which have both been altered after the photograph was taken. I ask students:

Students continue to build their understanding of the photographer’s role in setting a perspective to the photograph as illustrated by VanDerZee’s work. We conclude with a final question.

Their answers show an understanding not only of VanDerZee, but of portrait photographers as a whole. These creators have a perspective and work to create a message through the portraits that they create.

Like Loading...
‹ Improve Your Professional Practice with the AASL Standards and School Library PSELs
AASL Connection (#aaslcxn) – A Conversation Point for Our Profession ›