Reading picture books that focus on historical figures or events can be an opportunity to see how the author represented the focus of the book. Pairing that picture book with primary sources can help students explore how these people or events were captured and represented at the time. One book, Brave Girl: Clara and the Shirtwaist Makers’ Strike of 1909, allows us to look at both.

Clara Lemlich, the focus of the story, was an immigrant from the Ukraine and a shirtwaist factory worker. She was a leader in the 1909 strike for shorter hours, increased wages, and more sanitary working conditions. The women who participated in the strike were brutalized and arrested. The strike continued and grew to include tens of thousands of waistshirt makers, mostly women.

Students can gain insight into how an author chooses to represent a character by reading Markel’s book and focusing on how Clara Lemlich is portrayed. On one page, Clara is described as “dirt poor” but with “grit.” After describing the hardships of the factory, Clara is called “uncrushable.” After calling for a strike, Clara is described as a “hero” and as giving “fiery pep talks” and standing up to “thugs.”

Help students find these words by using a close reading strategy. Ask them to read the book through the lens of an author. What words and phrases is the author choosing when describing the main character or her actions?

After finding words and phrases throughout the book, students can look for patterns and name them. When Clara is described as “dirt poor” and having “grit” students may say she is being described as an underdog. Later in the book, “hero,” “fiery pep talks,” and standing up to “thugs” may be in a group that students would describe as empowered. Looking at the change can help show the growth of the character through the story. 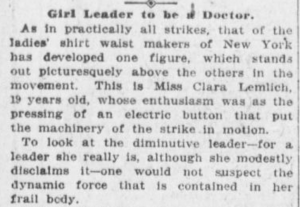 Bringing in primary sources can help students do the same activity with news stories. How are individuals portrayed by the language used in the story? Clara’s enthusiasm is described as putting the “strike in motion” and she is described as a leader in a December 12, 1909, article in the Omaha Daily Bee. She is described as “diminutive,” “modest,” and “frail” in the same paragraph.

Students can use the same close reading strategy to find these word choices. They can then look for patterns and discuss why there is a disconnect between groups of words that describe this person. 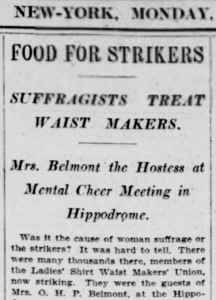 Students can then look at a moment in the Shirtwaist Makers’ Strike to explore the event itself after they explore how Clara Lemlich was portrayed. Newspaper articles give an account of a meeting that took place at the Hippodrome, a theater in New York City through the early part of the twentieth century. Examine the New York Tribune story that ran the next day. Shift the lens for students to look for evidence of how others at the time view the strikers. Using the same close reading strategy, compare those findings with evidence of how one shirtwaist striker views herself by reading a passage of the meeting from Theresa Serber Malkiel who published a diary covering her time striking.

Searches of Chronicling America can lead to even more events around the Shirtwaist Makers’ Strike to be analyzed using a close reading strategy. Explore a collection of primary sources connected to the picture book. The first half of the set connect to the meeting at the Hippodrome. The second half focus on Clara Lemlich.