The Path to NSLPY: Dreams Do Come True 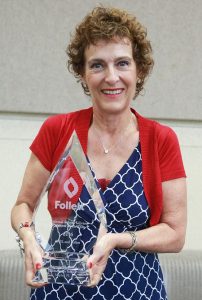 Books have defined my life in many ways, so explaining the excitement of winning the AASL National School Library Program of the Year Award can best be explained through literature.

As a little girl, I read the fairy tales where magic happened and “everyone lived happily ever after.” I always wondered what it would be like to wish upon a star and have that wish come true. Then Veterans Memorial Elementary School won the 2016 AASL National School Library Program of the Year Award, and I knew what it felt like to have your dreams come true.

I’ve been a member of AASL for over 30 years, so I knew about the awards. However, the thought of winning one seemed somewhere on the possibility scale of being named Miss America or claiming a million dollar lottery payment. If you’ve ever looked at the application, you know what I mean. It looks intimidating.

When I thought about the money the school would receive if we won the award, I imagined what we could do for our students and staff. It put a smile on my face every time I thought about it.  I’ve lived most of my life with an attitude of try and see what happens. I wondered if it was time to apply that attitude to the application.

School libraries have been placed at risk in many school districts. Ours has a professional media specialist supported by an assistant, but it seemed like winning the award would make it clear that our library was a keeper.

When working with youngsters, I encourage them to do their best and believe anything is possible. I finally decided it was time to put all those beliefs on the line in my own life and fill out the application. I did that during the 2014-2015 school year. I spent hours on the form trying to paint a clear picture of our program. I was ecstatic when we were awarded a visit. It was a very enjoyable day. When another school was named the winner, I was disappointed, but interested to learn about their program. When I saw the winning program, I was impressed. They involved their community in multiple ways and inspired me to examine our program and look for ways to make it better.

At the beginning of the 2015–2016 school year, we opened a Makerspace Lab. Our students had loved the Makerspaces in the media center, so it seemed like a natural progression. That drew the community into our space in new ways. Parents and grandparents came to Makerspace nights. One of our high schools let their classes come to work with our students during the school day. It was exciting!

It seemed reasonable to apply for the award again. I would be like the Little Engine That Could. I would say, “I think I can…I think I can.” With those words in mind, I filled out the application again. When we were awarded a visit, I was excited, but a little cautious. The visit went well, but so had the first one. Days passed and we heard nothing. I thought maybe this was an opportunity to learn patience. That would be a characteristic I could use more of, but I wanted to learn it faster. Think Gerald and Piggie in Waiting Is Not Easy!

When we received the phone call saying we had won, my principal and I were laughing and crying at the same time. We could have represented the title, Dreams Come True…All They Need Is You! Then we started to think about how to include our students in the excitement. I made bookmarks for each student that said, “I’m an important part of VME winning the American Association of School Librarians’ 2016 National School Library Program of the Year Award.” They were the reason that we applied, and we wanted each of them to feel a part of the celebration. Our school board honored VME at a meeting with an explanation of the award to the audience and a certificate for the school.

VME winning the award is one of the highlights of my professional career. I’m thrilled for the recognition that our students, staff, and community received. They are so committed to our library and its program. I received congratulations from people that I hadn’t heard from in years, as well as from our children and their parents who stopped in to say job well done. What an amazing experience it has been to be recognized for work that is my passion. I feel blessed, honored, and humbled and so appreciative to the committee that chose us.