Picture Books and Primary Sources: Interview with Barry Wittenstein, Author of A Place to Land

Authors and illustrators of historically based picture books often use primary sources as part of their research. These sources shape their understanding of a person, place, or time and ultimately help to shape the final story.

As we enter the third year of Picture Books and Primary Sources posts, I wanted to learn more about this process and share it with you.

In this post, I interview Barry Wittenstein, author of A Place to Land, which is illustrated by Jerry Pinkney.

Can you tell us a little about your new picture book? 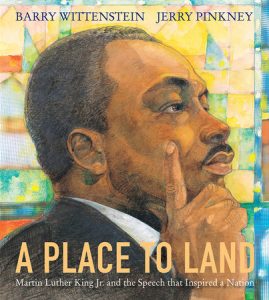 A Place to Land

Wittenstein: A Place to Land describes the night before Dr. Martin Luther King’s famous “I Have a Dream” speech. Although it has been written about in the adult market, there’s been nothing in children’s literature focusing on the behind-the-scenes leading up to that moment when Dr. King took the stage at the March on Washington on August 28, 1963. In short, the speech wasn’t finished until the early morning hours on the 28th… and was even changed on the fly during his reading. It is a study in the writing process and how MLK was able to synthesize the many voices that tried to influence his message and turn the speech into one for the ages.

Wittenstein: Some sources turned into dead ends. Others provided a bit more info. I suppose it ran the entire gamut. I listened to the live radio broadcast to confirm the order of the speakers. I looked at the Organizing Manual for Attendees and the first page of the Normalcy, Never Again draft. I had virtually visited 170 West 130th Street, the headquarters of Bayard Rustin’s March on Washington headquarters. I compared the old image with the new. 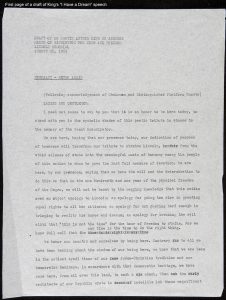 One item I learned about was the original paper that the speech was written on was given to George Raveling, a 26-year-old former college basketball player who was asked to provide extra security around King on the day of the historic speech. Raveling asked him for the speech immediately following King’s presentation, and King didn’t hesitate.

For years Raveling kept the speech in his home among his other papers and memorabilia. He’s gotten offers to sell it – valued in the millions – but has refused, and now keeps the famous pieces of paper in a bank vault. It was great, interesting information, but that didn’t serve the storyline.

I also reached out to Dr. Clarence Jones. Jones, I had learned, had performed many duties for Dr. King. He was not only an attorney but a trusted advisor and speechwriter. He clarified a few questions I had about the meeting at the Willard Hotel the night before and with President Kennedy immediately after the speech.

One example was that I had read somewhere that JFK said to Dr. King, “You had a dream.” But almost every other source indicated JFK said, “I have a dream.” Dr. Jones confirmed it was the latter. Dr. Jones also provided clarification as to the different agendas from the Willard advisors and confirmed that only Dr. Walker, who was chief of staff to Dr. King and a key strategist, mentioned the “I have a dream” phrase. Ironically, he advised against using it.

Dr. Jones ended one of his emails to me with this: “It is important that younger successor generations get the actual correct historical facts, rather than from some second-hand source who was not in attendance at the meeting from beginning to end.”

Why We Interact with Primary Sources

Barry Wittenstein’s interactions with primary sources are likely similar to our students’. They help to answer questions. Maybe they bring up new questions. Analyzing them shape our understanding. Some make their way into what we share with others, whether it’s Wittenstein with his book, our students with a paper, project, or a presentation where students synthesize and share their understanding.

Bringing A Place to Land to Students

A Place to Land stands well on its own. It is an engaging story that is well written by Wittenstein and illustrated by Jerry Pinkney. In a post later this school year, I’ll share ideas about bringing primary sources to the picture book to build upon the enjoyment and learning in the story.