Home › Blog Topics › Picture Books and Primary Sources: Interview with Chris Barton, Author of All of a Sudden and Forever

Picture Books and Primary Sources: Interview with Chris Barton, Author of All of a Sudden and Forever 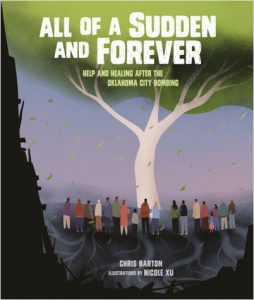 All of a Sudden and Forever

Authors of historically based picture books typically focus on one set of primary sources to tell their story, a set of materials connected with one moment in time. In his new book, All of a Sudden and Forever, author Chris Barton looks at two distinct moments in time. One moment is the Oklahoma City bombing and the immediate aftermath. The second is the long journey of recovery and healing for the survivors of the bombing as well as the family, friends, and community connected to it.

Each of these two moments, one short and one long, contain their own objects, interviews, and individuals that are directly connected to them. Some of those overlap. Others do not. Those two groups of primary sources that influenced Barton’s story make it a unique approach that leads to a powerful and touching story.

In this post, I interview Chris Barton, author of All of a Sudden and Forever, illustrated by Nicole Xu.

Can you tell us a little about your new picture book?

All of a Sudden and Forever is a picture book about the Oklahoma City bombing, but it’s not so much about the bombing as it is about recovery from and memorialization of a public tragedy. And I hope that what we portray in the book is even more universal than that.

This whole project came out of a trip I made to Oklahoma City in April 2016 to tour for another picture book. I had time before I left town to go by the Oklahoma City memorial. I knew about it, but I had never been there before. I knew about the field of chairs. I didn’t know anything about the rest of the memorial. I had no idea there was a museum. I had enough time to tour both the memorial and the museum.

There are two different timelines. There’s the timeline from the bombing. When you go to the museum you’re confronted with that right away. The true beginning of the tour begins with a simulation of this meeting of the Oklahoma Water Resources Board. It was a meeting that was taking place across from the federal building that day. You’re ushered into this room and the recording from this meeting begins. They’re these mundane bureaucratic proceedings until you hear this explosion. There’s this flicker of light and the 168 victims are displayed opposite the wall of where you are sitting. The first primary source, the first artifact, is that recording.

Then throughout there are so many artifacts of the everyday things that you or your colleagues have on their desk at work. That’s the focus. That was in the debris and so much of that has been recovered. It really connected me to the fact that these were everyday people leading their everyday lives. And as everyday people, they all had their family, their friends, their community, their loved ones who now have this absence in their lives. Seeing those artifacts really made that tangible from the very beginning.

Something that came out of the interviews on-site in June of 2017 was learning about the steps that had been taken to propagate the tree, to the extent of cloning it. There’s this recognition that the Survivor Tree is not going to be around forever. Once I heard that, I think that it clicked that the people are going to be gone, this particular tree is going to be gone, but the descendants of that tree, and the stories that people tell, that’s what is going to remain. I don’t think I would have had that realization if I hadn’t gone to the museum and done first-person interviews.

As far as the artifacts for the later part of the story, in the archives of the museum, they have logs from previous remembrance days on the anniversary of the bombing on April 19. There were at least four years worth of logs of people who received seedlings from the survivor tree. It had their name and contact information. These people from Oklahoma and beyond wanted to take home this living representation of the memorial. You could see where all these trees are going and I could get a sense of how this story lives on far beyond Oklahoma City.

How did primary sources help to shape All of a Sudden and Forever?

Instead of having a story and looking for quotes that would support the story that I wanted to tell, getting the interviews helped me figure out what the story was that I was going to tell. There’s going to have to be some sort of focus. I didn’t figure that focus out until I started doing those interviews.

I had some questions prepared in advance but I tried to let those conversations go where the people I was talking to were inclined to have them go. I probably relied more on follow-up questions than I typically would when I’ve got this long list of things that I’m trying to find out. The interviews were crucial to get me to the place where I could start writing.

Why We Interact with Primary Sources

When we want our students to learn from primary sources, those sources should be compelling or students are less likely to fully interact with them and draw as much understanding from them. One compelling aspect that comes across strongly from Barton’s experiences with primary sources is that we can have an emotional reaction to those sources. In our talk, he shared, “I don’t think you can tour the museum and not feel emotionally connected to it.”

The artifacts from the Oklahoma City bombing were items that could be found in many offices, but that normalcy connected an unthinkable act to his everyday life, helping him relate to the absences felt by those who lost a loved one. Our students don’t need to have experienced that loss to empathize with those who have lost. Primary sources may help them connect to individuals from the past and activate that empathy. 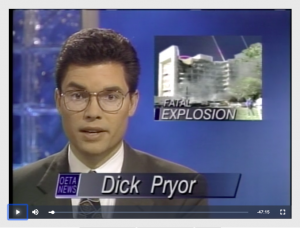 Whether dealing with 20th-century history or exploring issues of trauma and healing, All of a Sudden and Forever may find a home in schools to be used with classes of students or individuals and small groups. Students may lack contextual knowledge about the Oklahoma City Bombing depending on how you utilize the book. The Oklahoma City National Memorial Museum has historical photos of the Survivor Tree. There are also several short first-person perspectives shared in video when drilling down from the Lessons Learned page. For longer news coverage, national and local programming can be found on the American Archive of Public Broadcasting.

Note: Some of the visuals from the extended reporting can be graphic showing injured survivors immediately after the bombing.