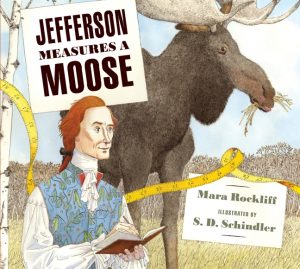 There are some fascinating historically based picture books that focus on a largely unknown moment of a well-known person’s life. The best of those highlights an aspect of that person’s character that helps the reader look at that individual differently from then on. This is the case with Jefferson Measures a Moose by Mara Rockliff and S.D. Schindler.

I had the opportunity to interview Mara Rockliff about her new book.

Can you tell us a little about your new picture book, Jefferson Measures a Moose?

Well, as the title suggests, Jefferson Measures a Moose is a funny story about math and history. The “villain” is a French count named Buffon, who claimed America was a miserable continent of puny people, dinky animals, and birds that couldn’t sing. Buffon had never visited America, but he had strong opinions—and, as the most famous naturalist in Europe, he was giving the New World a bad name.

Who could stop the spread of this misinformation? Someone who loved numbers. Somebody who made a hobby of measuring, weighing, and noting down information everywhere he went. Somebody willing to collect as much data as it took to persuade Buffon that he’d made a terrible mistake. Somebody like Thomas Jefferson.

Unfortunately, Buffon turns out not to be very persuadable. So Jefferson sets out to find a big, impressive piece of evidence the famous Frenchman can’t ignore. He sends off for a moose. And that’s when things get really weird…

What was your initial inspiration to write about this part of Jefferson’s life?

I first came across this story in 2015, in an article by Cara Giaimo on the Atlas Obscura website. The whole situation made me laugh, and I thought kids would find it funny too. But also, it was a great story about numbers and collecting data. I’d just published Mesmerized: How Ben Franklin Solved a Mystery that Baffled All of France, and I thought this story could do for math and measurement what Mesmerized did for the scientific method.

Looking at this book in 2020, though, I see it even more as a story about how we decide what to believe. Aristotle said that we’re persuaded by three things: logos, ethos, and pathos. Logos is logic, reason, facts, and figures. Ethos is authority or credibility: whether or not we trust the source. Pathos is emotional appeal.

Why did Europeans believe Buffon’s silly claims about America? Not because his arguments were logical. Not because his evidence was strong. They believed him for two reasons. First, because he was famous and influential (ethos). And second, because they wanted to (pathos). Of course America must be inferior to Europe. It just felt right! But, in fact, he was completely wrong.

What primary sources did you come across in your research? How did those sources impact your understanding of this event?

Thomas Jefferson wrote LOTS of letters. He got up before sunrise every morning, stuck his feet in icy water, then sat down and wrote letters until 1 or 2 p.m.

Reading Jefferson’s letters was a great way to make sure I had my facts straight, but it also made these long-ago events feel very human—and often hilarious. Here was Jefferson in Paris, squeezing time in between his official reports to Washington, to beg anyone he could think of to send him a moose. And here was the letter that accompanied the moose when it finally arrived, explaining that “the Jobb was both Expensive and Difficult” but had been “at Last Accomplished exactly agreeable to Your Directions.” Well, almost exactly:

The Horns of the Deer, the Elk and the Caribou I also send. They are not the horns of this Moose but may be fixed on at pleasure. [!] The skeleton of the other Animals I have not procured and am much mortifyed and no doubt you will be very greatly surprized at the Expence of what I now send…

Excerpt of Jefferson Letter to Buffon

Jefferson was indeed “greatly surprized” but paid the hefty bill, admitting ruefully, “It was my fault that I had not given him a rough idea of the expence I would be willing to incur for them.” While he declined to stick deer antlers on the moose’s head, he sent it all on to Buffon with a note that, 233 years later, still reeks of Jefferson’s embarrassment:

The skin of the Moose was drest with the hair on, but a great deal of it has come off, and the rest is ready to drop off. The horns of the elk are remarkably small. I have certainly seem of them which would have weighed five or six times as much…& therefore beg of you not to consider those now sent as furnishing a specimen of their ordinary size.

You can read this and 20,456 more of Jefferson’s letters at https://founders.archives.gov, along with 27,015 letters other people wrote to him. The Library of Congress also has a teacher’s guide to the Thomas Jefferson Papers—including an early draft of the Declaration of Independence, with handwritten revisions—at https://www.loc.gov/teachers/classroommaterials/connections/thomas-jefferson/.

Your back matter for this book is so rich. I’d love to know more about it if there is anything you’d like to share.

I wrote Jefferson Measures a Moose for two kinds of readers: those who love stories, and those who love facts and figures.* So instead of the book ending with one author’s note, it ends with two.

The first, “A Mania for Math,” tells more about the story. It was a fun chance to share some entertaining anecdotes (readers flipping through will surely stop to find out why there is a picture of a man being tossed out a window!) and interesting details (to help out his friend, James Madison not only weighed a weasel; he also counted its teeth, measured its tongue, and even reported how it smelled: “a sort of rankish musk, but not so strong as to be very offensive”).

HOW MUCH would a horse eat?

HOW FAR was an hour’s walk?

HOW LONG did it take to grow a pea?

I knew the facts-and-figures kids would demand answers to those questions and others raised in the course of the story. How big were animals in America? How much time and money did it take to have a moose delivered? “Jefferson’s Numbers” addresses them all.

*Of course, plenty of kids love stories AND facts. Luckily, no one has to choose!

Bringing Jefferson Measures a Moose into the Classroom 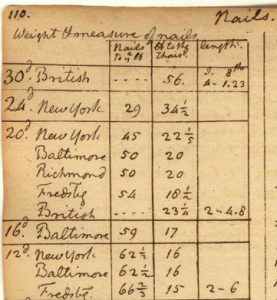 Rockliff’s responses show the obvious math connection that Jefferson Measures a Moose can be a part of along with history connections. I’ve collected several primary sources showing Jefferson’s mathematical documentation in a curated primary source set. Students could work with sets of Jefferson’s numbers or use them as inspiration for their own collections of measurements. Jefferson’s report on weights, measures, and coins, also in the curated set, could set the stage for a lively discussion and modified measuring given Jefferson’s suggested system.

For students who want to dig deeper into the interactions between Jefferson and Buffon, letters between the two as well as a letter from Madison to Jefferson are also included in the set of sources. Rockliff includes additional letters in her list of primary sources in the back matter. Students can use these to work with transcripts, translation (from French to English), as well as a look at letter writing formalities of the day. Of course, they also reveal additional information that students can use to build on their understanding of Jefferson and Buffon’s relationship from Rockliff’s picture book.