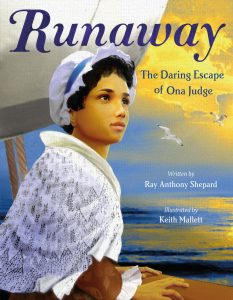 Recently I was listening to a podcast where one of the speakers shared that she didn’t want to read one more children’s book about George Washington. She quickly changed her statement to say that she would be open to it if the story had something interesting and unique to say.

That podcast made me think of a picture book that came out this year, Runaway: The Daring Escape of Ona Judge written by Ray Anthony Shepard and illustrated by Keith Mallett. The story isn’t one about George Washington, but does mention him a few times throughout the story. As the title suggests, it is the story of Ona Judge, a woman enslaved by George and Martha Washington. The picture book begins with Ona’s escape and uses rhetorical questions throughout to reveal the conditions Ona and other enslaved people endured. 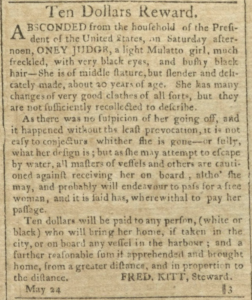 While primary sources have a factual base to them, they also contain a perspective. The creator of the document conveyed that perspective in its creation. To help students uncover that perspective, you may ask them to source the historical item or document. While there are several questions I may ask students to consider when sourcing an item, two that help to uncover perspective are:

In the back matter of Runaway, there is an image of an advertisement placed by the Washingtons for Judge’s return. Looking at perspective helps students understand why certain information is included about Judge and other information is left out. In addition, encourage students to explore how Judge and the Washingtons are portrayed in the advertisement.

Ask students to look for words and phrases that impact perception about both. The ad notes that Judge left “without the least provocation” with multiple ways that she may attempt to escape portrays the Washingtons as victims and Judge as plotted.

Using the Primary Source and Picture Book Together 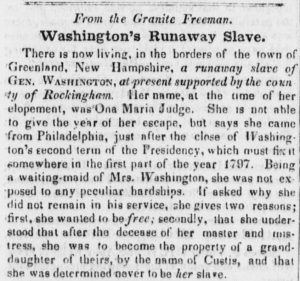 The advertisement does something else though. It puts the Washingtons at the forefront of Ona’s story. The Washingtons control the narrative in the advertisement. The picture book does the opposite, showing Ona on every page turn with minimal mentions of the president and his wife.

Invite students to consider both sources. How are both parties portrayed? What evidence is in the text or illustrations to support those ideas?

Extend the conversation with another primary source. Ona Judge gave an interview that was published originally in The Granite Freeman in 1845. It was also reprinted in several other newspapers. As part of sourcing the interview, ask students why the interviewer would want to speak with Ona Judge and why the newspapers would be interested in printing it.

Like Loading...
‹ Organize and Spice Up Google Drive
How Teamwork and the AASL Standards Positioned Calvert County Public School Libraries for the NSLY Award ›