Traveling the world, becoming inspired, overcoming obstacles, and changing life as we know it all sound like parts of some amazing movie. They are also parts of the picture book story of Samual Morse, inventor of the telegraph and Morse code. These were also elements of Morse’s story by Tracy Nelson Maurer and El Primo Ramon that had me instantly online to find primary sources related to his life and to the book. 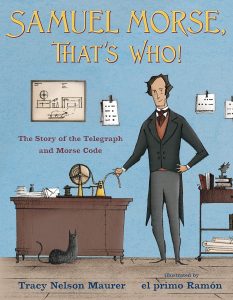 Maurer and Ramon’s picture book of Samuel Morse follows him from his early workings with inventions and art. That journey led Morse to France where he saw the French optical telegraph system. That experience, along with talks about electricity and its possibilities, led Morse to the idea of the telegraph. The story also tells of Morse beginning his code with dots and dashes standing for numbers. Those numbers would then correspond to words, about thirty thousand in all. That first code attempt led to his later work with a much more simple alphabet code. The first attempt at a temporary telegraph line between Manhattan and Governor’s Island ended in a stumble when the line was inadvertently cut. These stops and starts, trial and error, direction and redirection, are meaningful lessons to bring into classrooms.

The story of the invention of Morse code and the telegraph system fits into several curricular areas. This makes it an appealing possibility for elementary or middle school students to explore. There are obvious history connections for those who study the mid-nineteenth century. This book could also introduce the telegraph’s role in the U.S. Civil War.

Obvious science and STEM connections could be made to the invention of the telegraph and understanding how it works. There are several simple sets of instructions online to build your own telegraph system, and I would imagine there are a few students out there who would be interested in learning to send messages with a fairly secret language of dots and dashes.

Geography and economics also are entry points with Maurer and Ramon’s story. The focus on the first telegraph line from Baltimore to Washington, D.C., funded with a $30,000 allocation from Congress, is an intriguing focus of the story. Regardless of their entry point, primary sources may play a role.

Finding the Place for Primary Sources in Student Learning

Primary sources play a natural role at the end of this picture book. The book itself lays a foundation of understanding for a revolutionary invention that some students might not know about today. Primary sources can help them dig deeper into those stories and curricular connections to extend their learning.

The most readily available sources may be newspaper accounts of the day. Chronicling America has hundreds of newspaper stories about Morse’s telegraph line from Baltimore to Washington, D.C. This endeavor is a major event in the picture book. Other articles around the telegraph include people’s perceptions before and after its testing. These can help convey the importance of the invention.

Maurer and Ramon’s picture book, Samuel Morse, That’s Who! has the potential for meaningful learning across grade levels and subject areas. In many cases, the inclusion of primary sources can add a layer of depth that will add to students’ experiences with Morse and his important invention.