I first heard about Shirley Chisholm several years ago when visiting the National Portrait Gallery. A series of portraits of her around her 1972 presidential run opened my eyes to a piece of the past I had been unaware of. Shirley Chisholm Dared, written by Alicia D. Williams and illustrated by April Harrison, filled in so much of Chisholm’s backstory and made me want to know more about America’s first Black woman in Congress. I knew that a turn towards primary sources would answer even more questions. 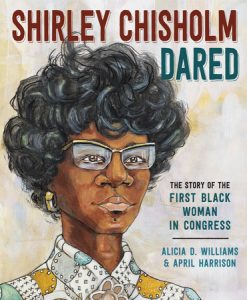 William’s writing and Harrison’s illustrations tell a birth-to-success story beginning when Chisholm is just three years old. It follows her and her sister’s time living in Barbados with their grandmother to the return to their parents six years later. The influence of Shirley’s family foreshadows her future drive as an adult. Vignettes along with repeated phrases show character traits: daring, rebelliousness, persistence, and troublemaker, which caused some people concern earlier in Chisholm’s life that would later lead to her success.

Winning a seat in the New York State Assembly leads to a run for the U.S. Congress that Chisholm also wins. And that is where the story ends. An author’s note provides even more context for Chisholm’s early life. Both together provide a compelling story that, when shared with students, invites obvious questions. 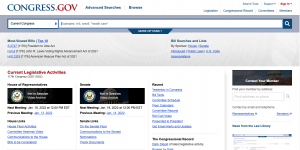 One set of primary sources that can be explored is the congressional bills and resolutions that Shirley Chisholm was connected to. They can give insights into what was important to her and some of the work that she did while in Congress.

Students may have predictions about the work that Chisholm did while in Congress. Williams gives readers some clues in her writings when she shares what Chisholm fought for as an assemblyperson. Students may call back to those clues, “Shirley introduces bills to help disadvantaged students pay for college and give unemployment insurance to domestic workers.”

After inviting students to make predictions, direct them to Congress.gov. This site holds information about Congressional legislation going back to 1799. Because it is so robust, I would suggest visiting their Quick Start Guide for an overview of the site’s features.

To explore Chisholm’s work, type her name into the search bar. That leads to quite a few results including legislation around a statue of Chisholm to be placed in the Capitol. To narrow results to legislation Chisholm was involved in, look to the filters on the left of the page. Select Sponsor and then select Shirley Chisholm. This will show the sixty-four bills and resolutions that Chisholm sponsored during her time in Congress from 1973 to 1983.

From this point, students could categorize the types of legislation sponsored by Chisholm. Collaboratively viewing the results in small groups, encourage each group to come up with their own categories to describe the legislation knowing that not all legislation needs to fit into a category. Have students share their groupings with each other to help reveal their thinking about the legislation. Clicking on the House resolution or bill may give students additional information beyond the heading.

Other primary sources beyond Shirley Chisholm’s legislative record could also be explored in connection with the picture book including her 1972 presidential campaign. My curated set of primary sources can be a starting point to identify related primary sources.

Circling Back to the Picture Book

After listening to the book and working with primary sources, ask students to look for evidence of character traits Shirley Chisholm displayed that cross both resources. Ultimately, such a question comes back to a goal of the picture book, understanding who Shirley Chisholm was as a person.