My students love the extraordinary. That is why I knew they would enjoy Strong as Sandow by Don Tate. Tate tells the story of Eugen Sandow, once known as the strongest man on earth. It also tells a story of determination, drive, and accomplishing goals. 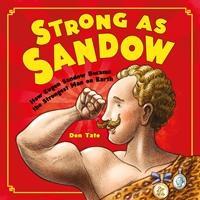 Because of his fame, Sandow was widely reported on during his time. There is no lack of primary sources that could accompany this picture book. What primary sources are best used with this book and with students? Many photos of Sandow show him only in a fig leaf which was mentioned in the afterword by Tate. But a great primary source leaves the students wondering, and not the kind of wondering that can come about when looking at people posing only dressed in fig leaves. 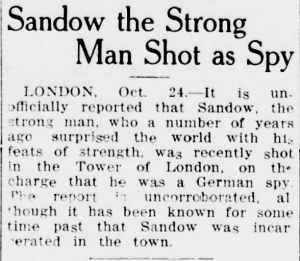 Instead, newspapers supply hundreds of references to Sandow that could be of interest to students. Some students might be intrigued by the many reports over time about Sandow’s victory over Sampson and Cyclops, two professional strongmen. In the picture book, it is written as a standing challenge that Sandow took the strongmen up on. Accounts in the newspaper are reported over years and vary widely enough to make today’s reader wonder if it was an agreed-upon act between the three men to put on a spectacle.

Other students may come across apparently false newspaper reports that Sandow was killed later in life as a WWI German spy. Accounts decades later claim he died around ten years later from natural causes. Still, other students may wonder why so many boxers and strongmen had Sandow’s same last name years after the “strongest man on earth” faded from the limelight. What surprised me as I searched Chronicling America when putting together a curated set of primary sources was the way that others benefited from Sandow’s name. That name appears to have been so well known that I believe Tate’s claim that Sandow was known as the strongest man on earth.

Grounding Our Understanding of the Individual in the Picture Book Both of Tate’s two-page spreads showing feats of strength could be focused on by students. The illustrations of the crowd alone may give them insights into Sandow’s fame. Asking students:

If students are unfamiliar with entertainment in the late nineteentth century, it may be helpful to briefly share facts around technology and entertainment of the time to help place Eugen Sandow’s performances into perspective.

Share a number of primary sources that use Sandow’s name to sell products. These and others can be found in the curated primary source set. Reminding students of their previous responses, ask:

Pairing a picture book and primary source in this way gives students an opportunity to explore advertising in a way that they likely have not before. From here they can make connections to celebrities of today and related advertisements. Similar questions likely give them an opportunity to look more closely at these modern-day uses of celebrity and product.