Historically based picture books, while often having some type of connection to our own lives, may not always seem timely. That certainly wasn’t the case with Linda Elovitz Marshall’s new book, The Polio Pioneer. The book explores Dr. Salk’s life and gives reader-friendly background about vaccine development and testing alongside community concerns and precautions around the polio epidemic.

I was excited to speak with Linda Elovitz Marshall recently about her new book and the primary sources that played a role in its creation.

Can you tell us a little about The Polio Pioneer? 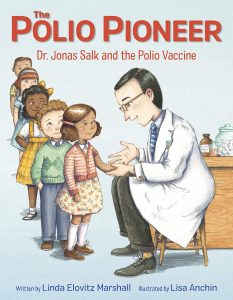 Let me start by saying that I’m old enough to remember when polio was a dreaded disease. Fortunately, that is no longer the case! But, I remember being four or five. I was living in Boston and my mother whisked my brother, who was a couple years younger, and me out of Boston and we went to Hartford where there was far less polio. We stayed there a couple of weeks and eventually returned to Boston. I don’t know if it was that summer or following summers but we were not allowed to swim in a local lake that was nicknamed “Polio Pond.” Nor were we allowed to go to movie theaters. It was many years before we were allowed to go to movie theaters for fear of catching diseases. So I have a vivid first-hand recollection of the times. I also had a concern that if we didn’t write about them now, they would soon be forgotten. That’s why I started the research for the book.

When I hear you tell about your history, in a sense, when we talk about primary sources, you’re one of those. I’m also wondering what other primary sources were in your research.

Early on… I think the very first step in my research, I was invited to La Jolla, California, for something else book-related and, before I went,  I made arrangements to visit the Salk Institute. I got a tour of the institute from one of the employees there who had been working with Dr. Peter Salk, Dr. Jonas Salk’s son. And I have to tell you, they were so warm and so welcoming! They showed me around so I could take a look at different laboratories and see the architecture of the Salk Institute, which is absolutely magnificent. And I went into the library and met with a librarian and we talked about some resources. And after, of course I followed up with a thank-you note to Dr. Peter Salk. Then he and I arranged for a telephone conversation. We talked maybe an hour or so and he’s been an invaluable help on this. He worked a lot with his father. His brothers also worked with their father. I just feel particularly grateful to the entire Salk family. So you can’t get a whole lot more primary than that.

Another resource I’d like to mention is an interview with Dr. Jonas Salk that PBS did. It was an excellent interview and gave me great insight into him.

I was looking at one page spread in particular. There is a newspaper headline and I always have to wonder if that newspaper actually exists with that exact headline “Salk’s Vaccine Works!” in reference to these almost 2 million American children that were described is polio pioneers.

To answer your question, the Polio Pioneer button on that page is 100% accurate. The people who were the polio pioneers, they were children who came for the initial shots. They each got a card. They got this button. Whether that’s an actual newspaper, I don’t remember because, I have to tell you, I did the research quite a long time ago. I can tell you about all of these individual letters.

I’m so glad that you brought it up! Tell us a little bit about the letters in the back with the author’s note.

I heard about the letters from Dr. Peter Salk. He told me his son had taken photos of the letters and the letters were housed in the University of Southern California Library. So, I got permission to read them and to use the photos and I sent what I had into my editor and they chose which ones they wanted to use.

I’m wondering when children, when educators pick up this book and read through it, obviously you’re sharing a piece of history with them. I’m wondering what do you hope they take away from this moment in history and this person in history.

When I started working on this, there was no such thing as COVID-19. Polio was a distant memory – a memory that was about to be lost. And while there are still outbreaks of other diseases, periodically Bubonic plague and various other things, I wanted young people to appreciate how much they are being protected and how important these vaccines are for the kind of life that we had been living. All that has changed with COVID-19. I don’t think that there’s a kid around who doesn’t know what’s going on. So, I hope it’ll bring hope. I hope it will reaffirm the miracle that vaccines bring, the way that they enable us to smile at strangers, to welcome strangers, to sit next to somebody on a bus and start a conversation and not worry they’re going to give you some terrible disease. So, I guess those are the kind of things I’m hoping I’ll take away.

Bringing The Polio Pioneer into the Library and Classroom 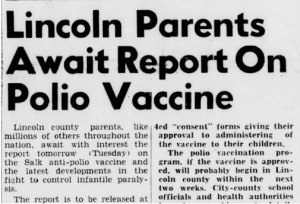 Students will notice the many young people in Marshall’s book. Whether it is Salk himself as a child or children as they are in the midst of the polio epidemic and later the vaccine. Primary sources can help those students connect even more with the time period and the event.

In my curated set of primary sources, students can explore the Polio Pioneer program where almost two million children participated in a large scale polio vaccination test. Newspapers of the time reported about community participation. Sources can explore the decisions that were made and discussions that happened to determine whether their local community would take part in the trials. Exploring the sources chronologically can even show the anticipation that took place over the months before the results were widely shared.

Students can also see how primary sources were utilized in Marshall’s research and how she herself played the role of primary source in her own book. Listening to her full interview can give students an even deeper understanding of what a primary source is and how author-researchers use them to explore a potential story.

Like Loading...
‹ Finding a Rhythm and Platform for Communication and Supporting Teachers
Civic Engagement Is an Ongoing Activity ›